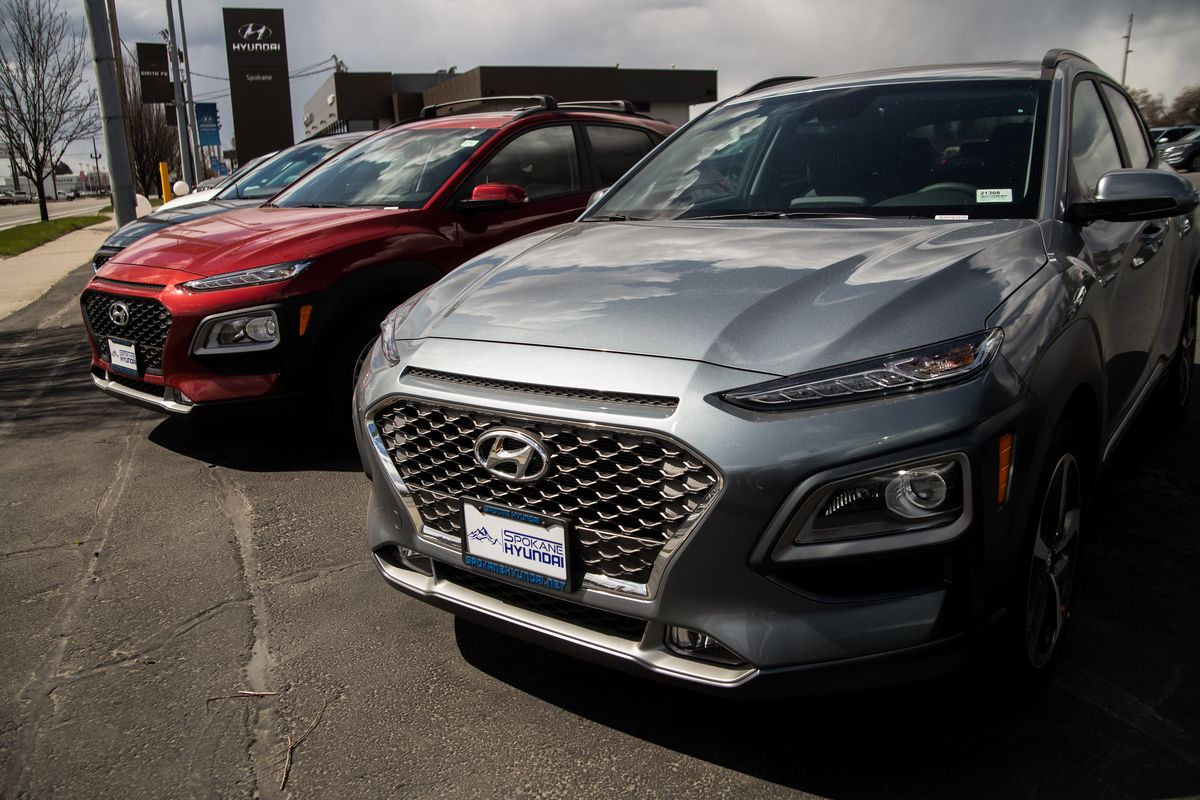 New Hyundai Kona’s are seen on the lot at Hyundai of Spokane on Monday, April 12, 2021 in Spokane Valley, Wash. The Spokane City Council may decides on Monday night whether to purchase five of the electric Kona’s for parking enforcement officers. (Libby Kamrowski/ THE SPOKESMAN-R)

The vehicles would be leased under a one-year pilot program that will inform Spokane leaders how they can best transition the city’s entire fleet of vehicles to electric power as gasoline engines are slowly phased out.

The new plan is the culmination of a monthslong push by Spokane City Council members who questioned proposals to lease traditional gasoline and hybrid electric vehicles.

In the proposal outlined for the council’s Urban Experience committee on Monday, the parking meter department weighed the benefits of leasing five all-electric Hyundai Konas against Toyota RAV-4 hybrid-electric cars.

But the gap narrows when other factors are considered, according to the city’s analysis. Officials expect to see savings from the Kona in annual maintenance and fuel.

Assuming each car is driven 9,000 miles a year, the city estimates the Kona will cost about $549 more than the RAV-4 annually.

Those calculations don’t account for an expected increase in insurance premiums – which officials warn could increase by about 20% – or the cost of eventually installing charging stations in parking enforcement headquarters at the Spokane Intermodal Center.

Still, the inflated price tag might be a fair price to pay for the lessons gleaned by integrating more electric vehicles into the city fleet, officials argue. Funding for the vehicles is already included in the Parking Meter Department’s annual budget.

The new vehicles will replace the one Ford Escort and four GO-4 parking enforcement vehicles. The GO-4s have three wheels and are designed to nimbly make their way through city streets but are limited by inclement weather and a shorter range.

“We chose to go with these vehicles specifically, and maybe not something smaller, because they do need to be able to haul cargo, such as car boots,” explained Nathan Groh, the city’s sustainable transportation analyst.

The city would sign a three-year lease on the new cars with Enterprise Fleet Services, but its terms would allow the city to re-evaluate the program every year and bail if necessary.

That was important to Spokane City Council President Breean Beggs – a champion of electrification.

The real savings in going electric, Beggs argued, is that the vehicles last twice as long.

“I’m supportive of the lease for the next year, but I hope we’ll start looking at purchases because that’s where we’ll save a lot of money,” Beggs said.

Beggs has repeatedly expressed concern that the city is failing to abide by state law, which requires cities to replace traditional vehicles with electric models whenever practicable.

Last year, he proposed a law that would require the city to not only meet standards under state law, but force city officials to notify the Public Infrastructure and Environmental Sustainability Committee when they plan to purchase a vehicle that isn’t electric.