To learn more about 'Wildergorn'

What started out as a casual hobby quickly became an obsession for Jerry Uppinghouse – a passion that intensified during the long months of the shutdown.

“I started coloring in 2016 when the adult coloring book fad started,” he said. “I used my daughter’s leftover elementary school colored pencils.”

Though not an artist, Uppinghouse has long been involved with the local theater scene, and currently serves as the lighting director for Spokane Children’s Theatre.

“I can’t draw a straight line with a ruler, but I’ve always had a sense of color,” Uppinghouse said. 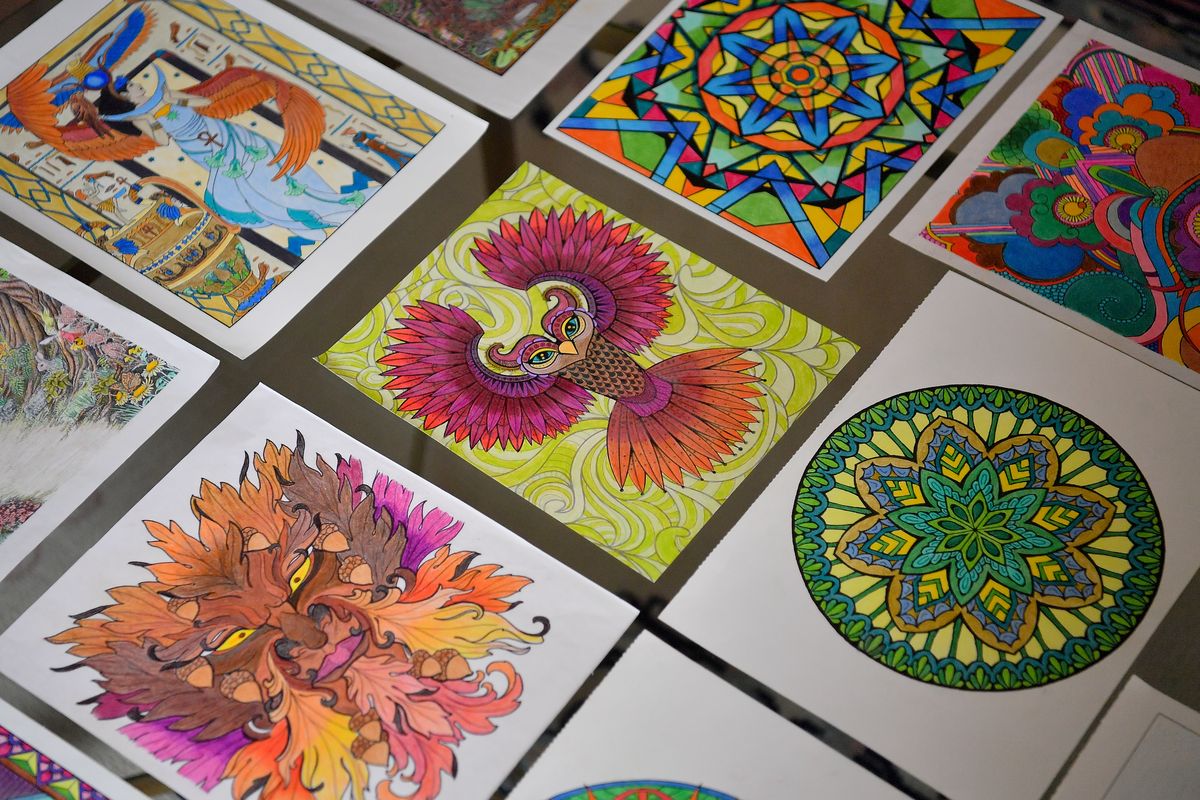 Some of Jerry Uppinghouse’s colored works are seen on Thursday, April 15, 2021, at his home in Spokane, Wash. (Tyler Tjomsland/The Spokesman-Review)

From that first adult coloring book, he moved onto line drawings and mandalas. When he knew his fascination was no passing whimsy, he invested in good quality tools.

“I use PrismaColor Premier pencils,” he said. “They’re wax-based.”

He learned the techniques of blending, burnishing, and layering colors.

“I knew I needed to understand how it works from the paper up,” he explained.

Uppinghouse enjoyed the process so much, that he soon looked for more challenging, intricate projects. That’s when he discovered the work of Jamie Courtier.

Courtier was for many years the creative director of Jim Henson’s Creature Shop in Camden Town, England, designing and supervising creature effects for a wide variety of movies including: “The Hitchhikers Guide to the Galaxy,” “Harry Potter and the Sorcerer’s Stone,” “The Snow Queen,” and more.

“Jamie has been selling posters (27 inches by 40 inches) for years,” said Uppinghouse, who’s working on the final poster of an eight-part series set in the fantasy world of Wildergorn.

The completed exquisitely intricate Wildergorn posters hang in Uppinghouse’s home in northwest Spokane – each one taking a month or longer to complete.

“They’re so detailed I have to get up and walk around,” he said. “I have to step back and look at it.”

With large pieces like the posters, Uppinghouse starts on the left side. With smaller work like coloring book pages or mandalas, he starts in the center and works outward.

“I often have to sharpen my pencil 40 times to lay down the color,” he said, pointing to one completed work.

Thankfully, he discovered extenders which allow him to use the pencil down to the nub.

When he finished his first Wildergorn poster, “Potter’s Road,” he shared it on Facebook. The vibrant work features fantastical creatures, trees, flowers and hot air balloons. While Uppinghouse gravitates to greens, blues and reds, he said the techniques he’s learned allow him to create his own colors.

To his surprised delight, Courtier contacted him, telling Uppinghouse how much he enjoyed his skill for depth and color.

They stayed in touch and that’s how Uppinghouse learned Courtier was publishing “The Book of Wildergorn” in December 2019, a 32-page coloring book featuring 12 inches by 17 inches line drawings replicating the posters.

“I got the first book sold in the U.S.” said Uppinghouse.

The autographed book became his pandemic project. During the anxious days of the shutdown, he colored six to eight hours a day, often with smooth jazz playing in the background.

Turning the brilliantly hued pages, Uppinghouse said, “It took me over six months to complete. I finished it in August 2020.”

“I created our own coffee table book.”

He pointed out some tiny flowers.

“You definitely have to color inside the lines,” he said.

“Or get a really good eraser.”

While he’s slowed down a bit now that he can once again golf and work at Spokane’s Children’s Theatre, Uppinghouse still says he’s coloring like crazy.

What he enjoys most is watching the black and white line drawings come to life as he blends and shades dozens of hues.

Cindy Hval can be reached at dchval@juno.com