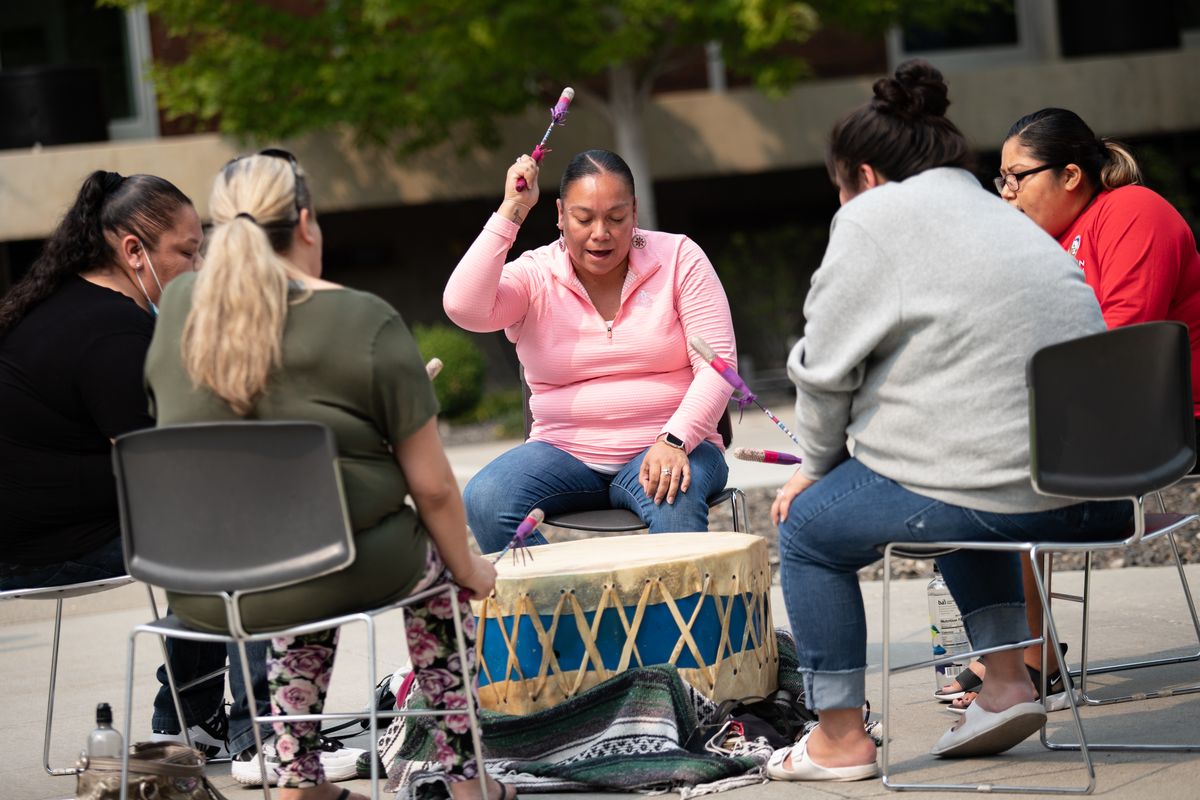 The all-female Rose Creek Singers drum group perform during the Whistalks Way Community Celebration held at Spokane Falls Community College on Friday, Aug. 20, 2021 to recognize the successful renaming of the former Fort George Wright Drive to Whistalks Way after the indigenous female warrior Whist-alks. The Spokane Tribe, Native Project, the Native American Alliance for Policy and Action and Community Colleges of Spokan collaborated for the event that ealso celebrated the achievements of modern-day native and indigenous women warriors in Eastern Washington. (Libby Kamrowski/ THE SPOKESMAN-R)

More than 100 people gathered outside of Spokane Fall Community College Friday to honor the change of George Wright Drive to Whistalks Way.

The street was named in honor of the U.S. Army general George Wright who committed genocide against the Yakama, Spokane, Palouse and Coeur D’Alene tribes throughout the fall of 1858. The Spokane City Council unanimously voted to change the name last December.

The fight to rename the road began with the late activist Debbie Abrahamson of the Spokane Tribe in 1975. Friday afternoon and 46 years later, over 25 Native tribes were able to see a generational victory.

“We finally got it done,” said Margo Hill, a Spokane Tribe member and one of the organizers of the event . “We got that man’s name off our streets. We honor our Indigenous women today and gather for a land acknowledgement.”

The new address honors Whist-alks. Her story was gathered through oral histories of Indigenous elders, most of whom where Salish speakers. Whist-alks was the daughter of Chief Polotkin of the Yakama tribe and wife of Qualchan. It was Qualchan’s tradition to have Whist-alks at his side with a medicine staff during battle. Wright and his cavalry attacked Whist-alks and Qualchan’s tent and hanged Qualchan. Whist-alks escaped on her horse, but returned and faced Wright’s tent, where she struck the medicine staff into the ground before leaving for good. She spent her finals years living by the mouth of the Spokane River.

The Spokane Tribe presented Spokane Falls Community College with a painting to honor Whist-alks. The ceremony celebrated Whist-alks, but also the current Indigenous women of the community.

“For the Spokane Tribe, it was important to not just honor one individual because that’s not how we think as tribal people,” Hill said. “Our tribal elders and council wanted to honor the ‘sinimsheen,’ the women warriors of the 1800’s, but also our grandmothers and great grandmothers. These woman today stand on the shoulders of great women that came before them.”

Over 70 Indigenous woman were honored in eight different community sectors such as health care, urban and local business, politics, art, the urban Indian community and education. They were granted a certificate and a scarf, a tribute to Whist-alks, who wore a purple color scarf while riding into battle. The shade is unknown, but a softer, lavender-like purple is often seen in the Pacific Northwest’s Indigenous clothing. A logo of Whist-alks is in the bottom left hand of the scarf. Artist Helen Goodteacher created the design.

“It means so much to me as a native woman, we’ve always been warriors,” said Goodteacher, of the Nez Perce and Sioux . “I always wanted my mother to be proud, and I wanted her to see that I was a warrior too, and mine just so happens to be art. It’s an honor to be a part of this. I’ve worked with some of these women myself.”

Community organizers such as Toni Lodge, the CEO of the Native Project, helped announce the honorees. She knew them personally or had collaborated for community work. Some were her first group of mentors and camp kids decades ago and the mothers of her ten grandchildren, showing the intergenerational Indigenous women who take action to keep the Native community and the city of Spokane alive.

“We are committed to our work in this community,” said Lodge, of the Turtle Mountain Chippewa . “The work never ends, and a lot of us understand that. It gives me hope to see all of these women.”

Darlene McCarty, 76, and Barbara Gongyin, 42, shared the moment as mother and daughter. McCarty’s decades-long work as actress, activist and cultural practitioner as a member of the Spokane and Makah Tribes was celebrated. Gongyin, member of the Spokane Tribe, was praised for her decades-long work as a Kauffman and Associates employer and activist.

“It’s nice for the community to see what we women do for our community,” McCarty said. “I’m glad that we have different generations taking part of the work, but we always have.”

Symetria Gongyin, Barbara Gongyin’s daughter, was in attendance to watch the honoring celebration for mother and grandmother for their work in the community, calling their work “two huge pairs of shoes to fill.” The celebration was proof of Hill’s metaphor that work done by past Indigenous women is a link to those before them.

“These are women that’s been doing work for 20, 30 years,” Symetria said. “I think they’re being recognized of the name change, but they’ve always been important to our community. It’s a good thing to celebrate our tribes and women for the work they’ve been doing forever and it’s definitely intergenerational.”

Spokane’s mayor Nadine Woodward and Lisa Gardner, the Director of Communications & Community Engagement for Spokane City Council, were also in attendance. Woodward applauded the city council members and the tribal members who “never gave up on this project.”

“The change we’re celebrating today is after years of perseverance and passion from members of the community who never gave up,” Woodward said. “We appreciate your tenacity to make this community moving forward to a better future for all who call Spokane home.”

For community workers such as Councilwoman Carol Evans of the Spokane Tribe, the ceremony was a teaching for the upcoming generations of activists. She remembers being 3 and her maternal grandmother teaching her to shake hands with all the elders. Like her grandmother’s teaching of respect, Friday was a day of honor that all can benefit from.

“What (my grandmother) and this event is teaching us is that people matter,” Evans said. “The name change is to honor a women warrior in history. Today we have so many women that are making the difference. It’s a beautiful thing.”