By Katharine Kumangai The Spokesman-Review

“I am blown away,” Same Dress Spokane founder Rachel Fellows said of the results Tuesday. “There were tons of variety, a lot of beautiful photos, and it was interesting to see what was the inspiration for each photographer.”

Lisa Pipella of Spokane chose an astrological theme, for instance, that was creative and different, Fellows said. 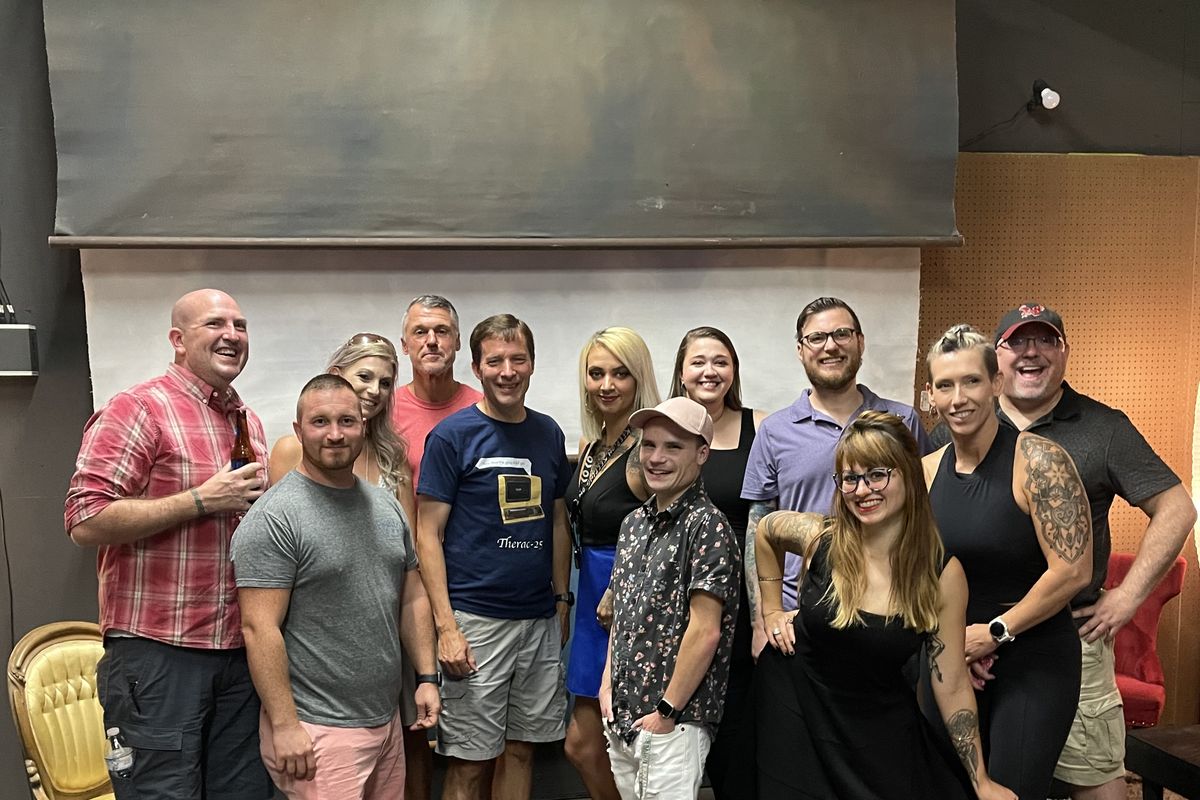 “I have been wanting to do a zodiac-inspired shoot for a long time and decided to go with Leo, since that is my sign and my model’s sign as well,” Pipella said. “I also chose to focus on the element of Leo, which is fire, so the lightning was a perfect fit.”

Pipella said she worked with model Kaylee Peterson years ago and wanted to work with her again.

“Fashion, fantasy and creative photography are my favorite genres, and I was able to incorporate all three in this shoot,” Pipella. “In a way this was like paying tribute to our growth and successes in life and our careers over the years.”

The dress is a silver metallic, long-sleeved, mid-length wrap dress.

The project initially included 12 photographers, but one was unable to complete a shoot. The photographers took turns photographing the dress on a model and revealed the results on Facebook and Instagram and to each other during a gathering Saturday.

The dress is being auctioned on ebay.com this week to raise funds for Spokane Humane Society. On the first day of the fundraiser, cash donations made through Same Dress Spokane links had reached $700, Fellows said. On Tuesday, the dress auction was up to $54.

People can view the photos by searching for #SameDressSpokane on Instragram or by visiting the Same Dress Spokane Facebook page.

The photographers provided two photos each, from which The Spokesman-Review selected one for these pages, along with a short summary of the inspiration for the themes.

Jake Donovan of Spokane who worked with model Samantha Shivvers, said, “What made me want to participate in this project was the need for a challenge. I love when I’m asked to let my creative side run wild and put my own spin on an idea. It has also been great being able to meet and form relationships with other local photographers in Spokane. I can’t wait to see the images from everybody else and how this dress inspired them.”

John Austin has photographed the Spokane area since 2005. He shot the dress with model Ilsa White on the rooftop of Merlyn’s Comics and Games Building .

“I knew immediately who I wanted to feature as my model. Ilsa is an up-and-coming model and has what it takes to make it big. She’s just graduated high school, and with her looks and stature and ease at posing already, she’s ready for prime time. … I think Ilsa made the dress look amazing. I hope our bidders agree,” Austin said.

Spokane photographer Tabor Cote worked with model Taylor Merrill Lunde. He also is one of the original photographers in the project since its inception three years ago.

“I had a rough idea of what I wanted to do. The photo was shot in broad daylight, which made editing it even harder. I pushed myself beyond what I thought I could do, and I think it paid off.”

Photographer Jason Jakober of Coeur d’Alene said the silver color of the dress reminded him of Shadow Falls in North Idaho where he visited a few years ago.

“I knew the silver color would work perfectly with the color of the waterfall,” said Jakober, who worked with model Amy Joy.

Michael Wolfgram took inspiration from the David Bowie of the 1970s to ‘80s, and used a mural of Bowie in the Garland Business District area as a backdrop. He worked with model Amber Blackstock of Spokane on the concept for the shoot.

Wolfgram, of Saginaw, Michigan, but stationed at Fairchild Air Force Base, said the fundraiser aspect of Same Dress Spokane inspired him to take part in the project.

“I have two German shepherds and a cat. With a person that deals with mental health issues and the stresses of military life, I find that animals are the greatest thing (along with photography) to help deal with such issues,” Wolfgram said.

Project founder Fellows, of Spokane Valley, said her vision is “‘Ziegfeld Girl’ meets 2021. The color of the dress is a nod to a ‘silver lining’ when thinking about the pandemic, stress and uncertainties of the past year.”

“I’m so grateful to the photographers, models, and everyone for supporting us and the Spokane Humane Society,” Fellows said. “The reason I created Same Dress Spokane will always be rooted in celebrating creative diversity.”