If light is the symbol for knowledge, students at the new Glover Middle School will be inspired the moment they walk inside.

When the school year begins Sept. 2, they will step into an outsized room of bright whites and natural sunlight, to stairs that lead to state-of-the-art classrooms and a world of great possibilities.

Then again, their first question will probably be “Where do I eat lunch?”

The grownups thought of that, too, and built a commons that seems to stretch halfway down the building to the classrooms beyond.

“It kind of takes your breath away,” Principal Mark Lund said Monday as workers scrambled to finish a project that’s been three years in the making. 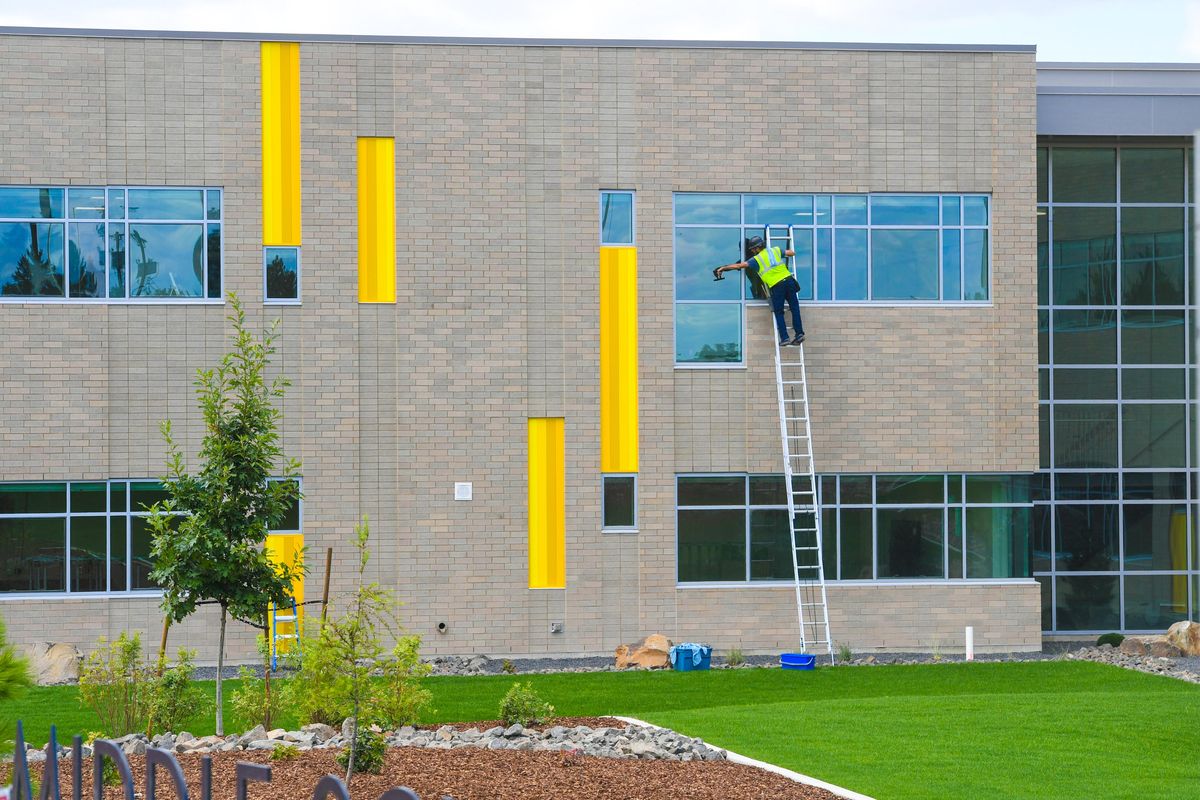 It began in November 2018 with the passage of a landmark capital bond. Almost immediately, design groups drew from the imagination of parents, teachers, administrators and students.

Or as Lund said during a session in the spring of 2019: “to rip the doors off the current model.”

They’ve certainly done that. They also ripped out many of the walls and replaced them with big windows that seemingly look out over most of northwest Spokane.

When the old Glover building is torn down later this year, those views will extend to the bluffs beyond the Spokane River.

Lund can’t wait to share that vision with students; in the meantime, he’s grateful to community, not only for investing $43.5 million, but giving time to the design process.

“The way the vision played out and the community focus, there was so much cooperation,” Lund said. “We really honed in on some basic principles and that was built on connectivity.”

Inspiration for the 135,000-square-foot building was drawn from the river. The property slopes down from east to west, allowing NAC Architecture of Spokane to design a commons that evokes the Bowl and Pitcher.

A stairway descends via different routes onto a main floor, that holds eddies suitable for dining.

That means students will be moving upstream to reach their classes; however, the halls are short and inviting as they lead to a trio of two-story neighborhoods.

Those halls are flanked by off-white-colored walls and above that, oversized windows.

Hillyard campus is much more than a new Shaw Middle School

Jon Swett, the principal at Shaw Middle School, has a bold idea for the first day of school. | Read more

Greg Forsyth, the district’s director of capital projects, pointed out that the neighborhoods can be self-contained or independent, can be divided by grade level or subject.”

Each neighborhood holds four state-of-the-art classrooms, for science, mathematics, social studies and English and can be subdivided.

That flexibility will come in handy this year, as only seventh- and eighth-graders will be at middle schools. For that reason, one of the neighborhoods will hold both grades; sixth-graders will take their place next fall.

Forsyth also expects students and teachers to feel more connected to one another, partly because the neighborhood concept will keep them together 90% of the time.

Instead of long walks down the hall to a distant classroom, there will be more opportunities for small-group collaboration.

Students can reach music and physical education classes through a separate hallway without going through the commons.

The gymnasium is spacious, with two full basketball courts that can be accessed by the community after school hours. Upstairs is a mat room that also will accommodate pickle ball, jump rope and personal fitness.

“We finally got the mats out of the cafeteria,” said Shawn Jordan, chief operating officer for the district.

Next to the mat room is a fitness area that includes stationary bikes and weight machines.

“That’s part of the outreach to the community,” Forsyth said. “A lot of our students don’t go to private gyms because they can’t afford it. We’ve had a lot of conversations around that.”

New Sacajawea and Peperzak middle schools will open in 2023

Once the dust settles in the fall of 2023, the new Sacajawea Middle School will be an even better neighbor. | Read more

At that point the conversation turned to the near future. Someday, the fitness room will look out to the river bluffs.

However, there’s still work to do. Outside, dozens of workers were finishing concrete work, not all of which will be complete when school opens.

Beyond sits the old Glover, which according to Forsyth has a “significant” amount of asbestos and will require careful demolition that will extend into October. In the meantime, teachers and staff will use a temporary parking lot.

The school will hold a ribbon-cutting ceremony Sept. 2 at 8:45 a.m.