A Spokane County firefighter died Thursday while responding to a reported wildland fire that turned out to be a false alarm, officials with Spokane County Fire District 9 said Monday. 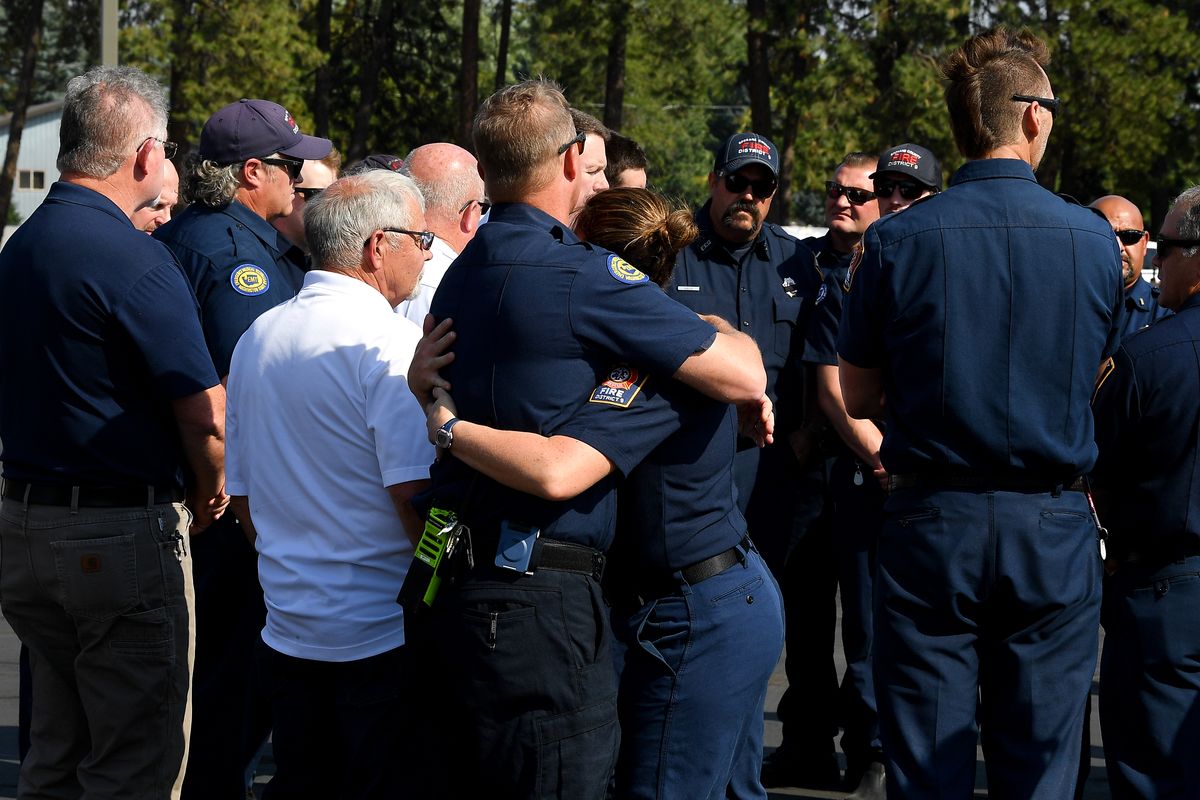 Firefighters embrace following a news conference Monday at the Spokane County Fire District 9 in Mead after Lt. Cody Traber was killed in the line of duty on Thursday while answering a fire call in north Spokane near Highway 395 and Wandermere Road. (Tyler Tjomsland/The Spokesman-Review)

Lt. Cody Traber, an 18-year firefighter with the district serving Mead and areas north of the city of Spokane, fell from the Wandermere bridge while trying to get a better vantage point to spot a reported brush fire in the area of Highway 395 and Wandermere Road. Wildfire Division Chief Bobby Shindelar said no foul play is suspected.

District 9 firefighters were dispatched around 9:45 p.m. Thursday after a passerby called Spokane County Fire Dispatch to report a wildland fire, Shindelar said. Cates said the call has been officially recognized as a “good intent call.”

Unable to spot evidence of a fire near the location, Traber and two other firefighters aboard District 9 Engine 92 moved to the Wandermere bridge to get a better vantage point. Shindelar said Traber alone exited the engine to get a better look. No other details surrounding his fall were released at this time.

Traber was declared dead at the scene.

Washington State Patrol, Spokane County Sheriff’s Office and the Washington Department of Labor and Industries are conducting the investigation. Additional information will be released at a later date, according to District 9.

The fire district initially released information about Traber’s death Friday. Cates said there was a delay in releasing additional information out of respect for the investigation, Traber’s family and the District 9 firefighters.

“Cody was an individual when asked to help in any way, he was always one of the first to step up,” Cates said.

Shindelar said peer support and group sessions have been offered to firefighters in light of Traber’s death.

“The Traber family, Spokane County Fire District 9 employees and the rest of the local fire community are devastated by this tragic accident,” Shindelar said.

Traber, 41, is survived by his wife, Allisyn, and four young children.

A number of career firefighters with District 9 joined fire department leadership for Monday’s press conference in front of Engine 92. They each wore black bands across their badges – a traditional symbol of mourning for fellow officers killed in the line of duty.

Traber was active at District 9 with all levels of training, such as structure firefighting and medical training. And while he enjoyed all facets of firefighting, wildland firefighting “was his passion,” Shindelar said.

“He had a sense of humor that people could appreciate, and they just enjoyed being around him,” he said. “It’s unfortunate what happened. Cody was a wonderful person.”

A memorial service date has not yet been determined at this time. Traber will be moved Tuesday afternoon via formal procession to the Heritage Funeral Home.

To help the Traber family, community members can make donations to Spokane County Fire District 9, Local 2916 Benevolent Association either online via PayPal, at bit.ly/codytraber, or by check.

This is the only organization and donation site endorsed by the Traber family, according to the fire district.