A GRIP ON SPORTS • From high school to the NFL, there is a lot going on in the football world today. We will try to touch on all the important markers on this cool Tuesday but we may miss one or two. It’s that crowded of a day.

• We’ll start in Seattle, where the Seahawks have to make roster cuts by the early afternoon. Will there be any surprises? One might be Rashaad Penny, but even if the running back isn’t chopped, he’ll be on the block all season. 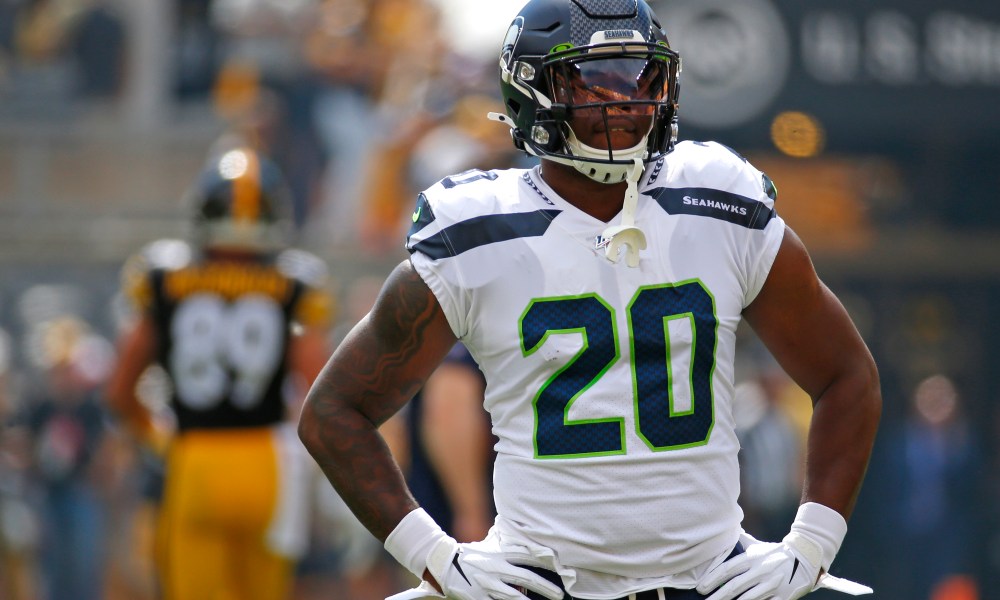 It’s a make-or-break year for the first-round pick of 2018, something that seems to happen with regularity around the Hawks. Rarely does a John Schneider first-round selection step right in and have success right away. It seems, lately at least, he’s done better finding gems lower in the draft than at the top.

Part of that can be blamed on the Hawks’ success. They haven’t had a really high pick in a while. And part of it is Schneider’s philosophy. He would rather draft a whole bunch of guys in the mid-to-lower rounds than one first rounder, so Seattle trades down a lot.

But it is undeniable. The Seahawks have not hit big at the top of the draft in a while. The last star? Either Earl Thomas in 2010 (their second first-round pick that year) or Bruce Irvin in 2012. It all depends on your definition of a star.

Penny is just the latest of he group to hit the end of his usefulness in Seattle. If he has. That will be determined soon. • Down the road in Pullman, the Cougars announced their depth chart for Saturday night’s late (8 p.m.) opener against visiting Utah State. There were a few surprises but the “or” between quarterbacks Jayden de Laura and grad transfer Jarrett Guarantano isn’t one of them.

We may not know who starts at that all-important position until just before kickoff.

We also don’t know why senior defensive lineman Dallas Hobbs was not listed anywhere on the two-deep. And that is a surprise. All we know this morning is he’s not there and may be missed. 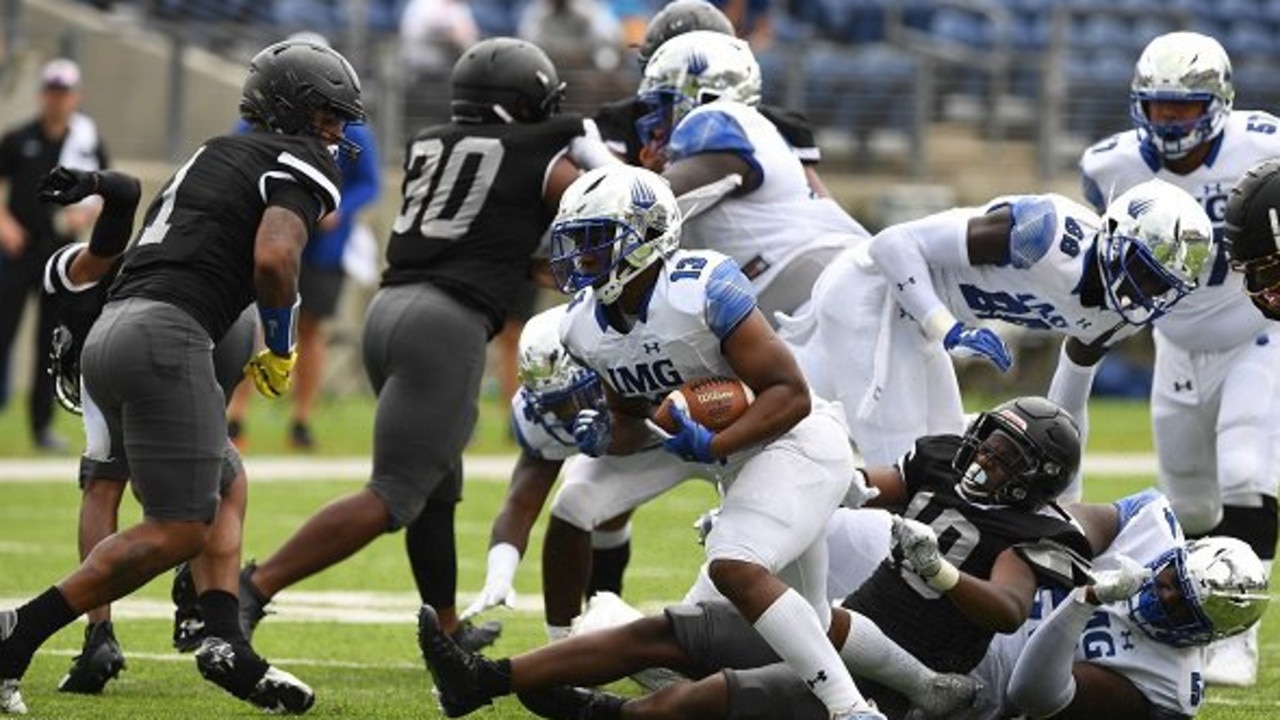 • High school football kicks off in Spokane on Friday night. It started in Idaho last week. And it entered the national spotlight, in an awful way, yesterday.

If you happened to miss ESPN’s presentation of Sunday’s game between IMG Academy (a prep school owned by a conglomerate) and Bishop Sycamore, you didn’t miss anything. Well, a 58-0 rout that was ugly from the opening kickoff.

Maybe ugly doesn’t really describe it. Criminal might be better, because there seems to be elements of fraud involved.

Bishop Sycamore isn’t a real school with a real address, physical or virtual. The football team, which played and lost a game Friday night before the Sunday one, doesn’t have many players and some of them, according to reports, might not be high school age.

The bottom line? ESPN was duped into showing a game that wasn’t really a game. And the network that touts itself as the WorldWide Leader didn’t do its due diligence, relying on another company for the legitimacy of the match.

There might be some good to come out of this, but I doubt it. Maybe such matchups between national powers outside the purveyor of high school athletic associations will be scrapped. But we doubt it. There is money to be made.

• We’ll step away from football for a second to say goodbye to a local athletic director.

Today is Mike Roth’s final day in that position at Gonzaga University. (Don’t miss Theo Lawson’s interview with him or Dan Pelle’s photo essay of his penultimate day in the office.)

If Mark Few is reason No. 1 for the huge athletic changes at GU this century, then Roth is close No. 2.

Yes, basketball’s success has fueled the rise of an athletic program from unknown to among the best-known nationally among non-football schools.

But Roth, who, by the way, made the decision to elevate Few from assistant to head coach, has astutely ridden the basketball-caused wave – and guided the floodwaters into the right reservoirs.

Under his watch, the south end of campus has been transformed. What once was an out-of-the-way home for athletics has become not just the university’s front porch but its front parlor, where most crucial introductions to Gonzaga are made.

It’s a legacy that will never pass. Even as Roth’s time at the school has.

At some point a building will be named after him. Maybe the Mike Roth Athletic Administration Complex or something. It will happen. He’s earned it. 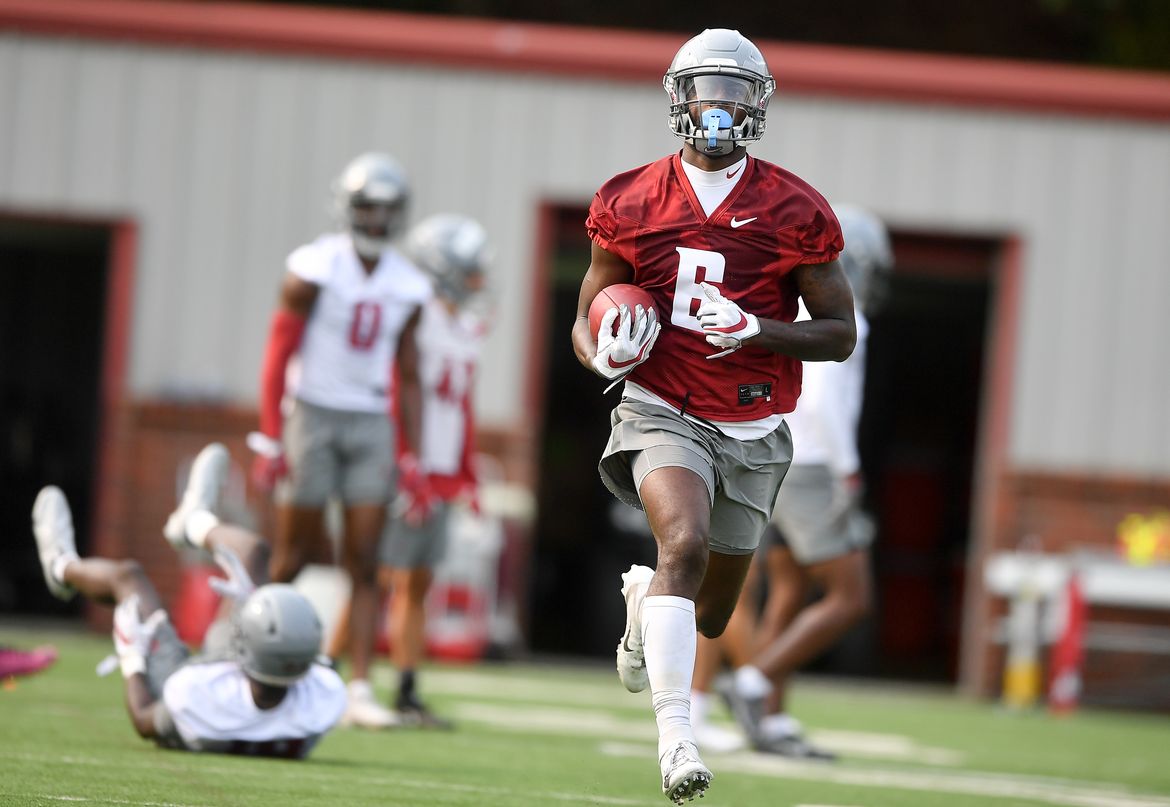 WSU: We delved into the Cougar depth chart a hair above, but Colton Clark looked at it in-depth in this piece. … He also takes a first look at Saturday’s opponent, Utah State. The Aggies have revised their roster quite a bit since last season. … Safety Daniel Isom is trying to take advantage of his second chance. … The fans of the Jacksonville Jaguars feel pretty much the same about Gardner Minshew as Cougars fans. … Elsewhere in the Pac-12 and college sports, Jon Wilner rates the most-impactful newcomers in the conference in the Mercury News. A WSU defensive back makes the list. … We can pass along six reasons why Washington will win the conference title. Jimmy Lake has his thoughts on the matter as well. … Oregon released its depth chart for the game against Fresno State and there was a surprise on the offensive line. It was due to injury. … Oregon State did the same. The key spot? Quarterback, where Colorado transfer Sam Hoyer will start against Purdue. … Colorado has a new starter as well at that spot. Brandon Lewis takes over from Hoyer. … Utah has new quarterback too. (It seems to be a theme in the Pac-12.) And a new-look stadium. … The NIL news just keeps on coming at UCLA. The fans? Not so much. … USC can’t overlook San Jose State. … Here’s a question. What if the NCAA’s investigation into Arizona State’s COVID-19 recruiting practices doesn’t uncover violations? What then? … ASU faces Southern Utah this weekend while Arizona plays a new-look BYU squad. … The Wildcats will start WSU transfer Gunner Cruz and he may play the entire game. 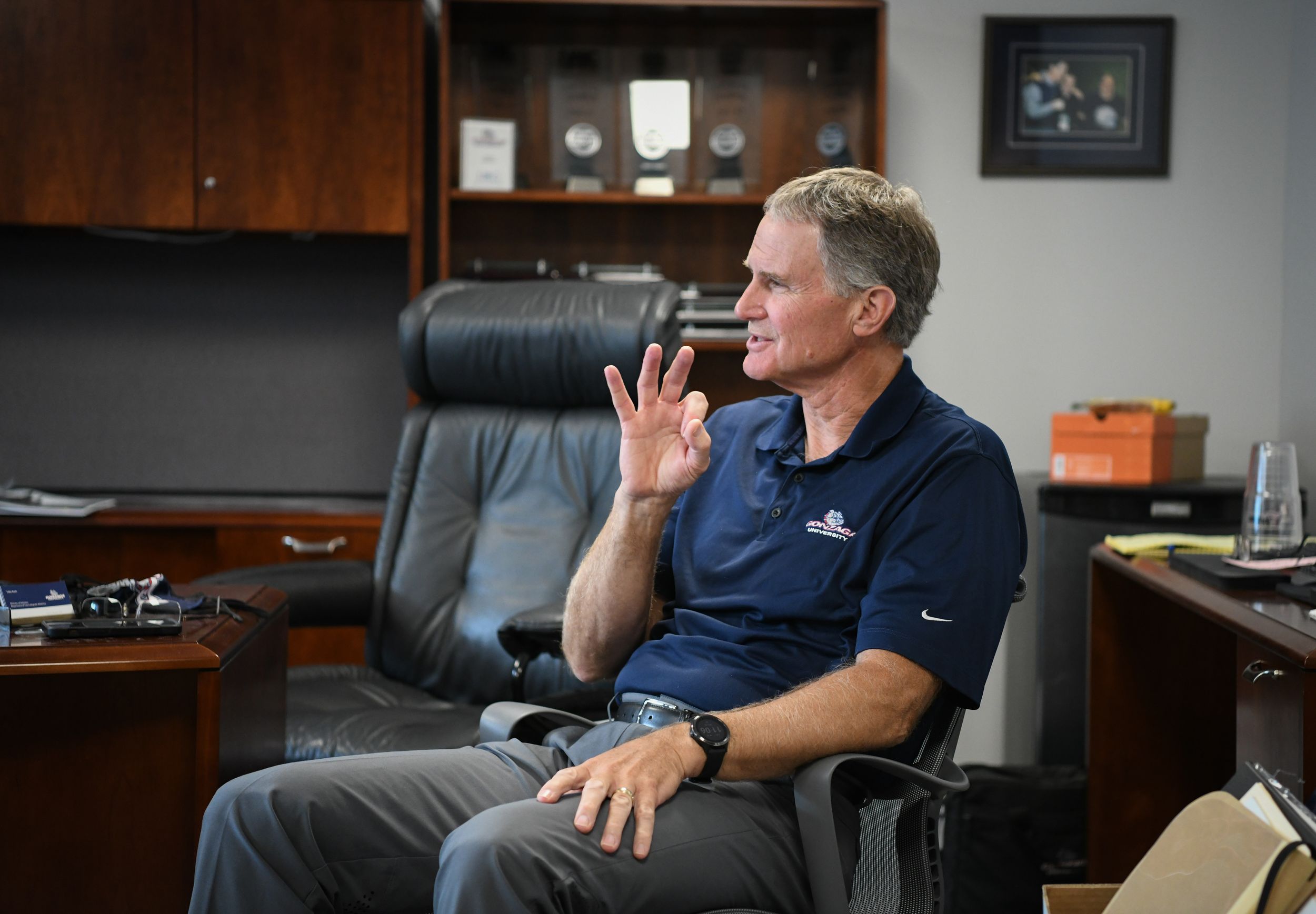 Gonzaga: Besides the items on Roth (Theo’s story and Dan’s photographs) we linked above, we can also pass along Jim Meehan’s usual Monday appearance on Larry Weir’s latest Press Box podcast. … If you happen to watch West Coast Conference games on ESPN, you’ve been happy to hear Dave Flemming’s voice come through your TV. Maybe it’s because he rarely works with Bill Walton but mainly because he’s such a pro. One of the best play-by-play talents on the West Coast.

EWU and Idaho: Around the Big Sky, Northern Arizona hosts FCS defending champ Sam Houston State this weekend. … Montana State and Wyoming match up with a lot of similarities. … Montana hopes to hold up against host Washington. 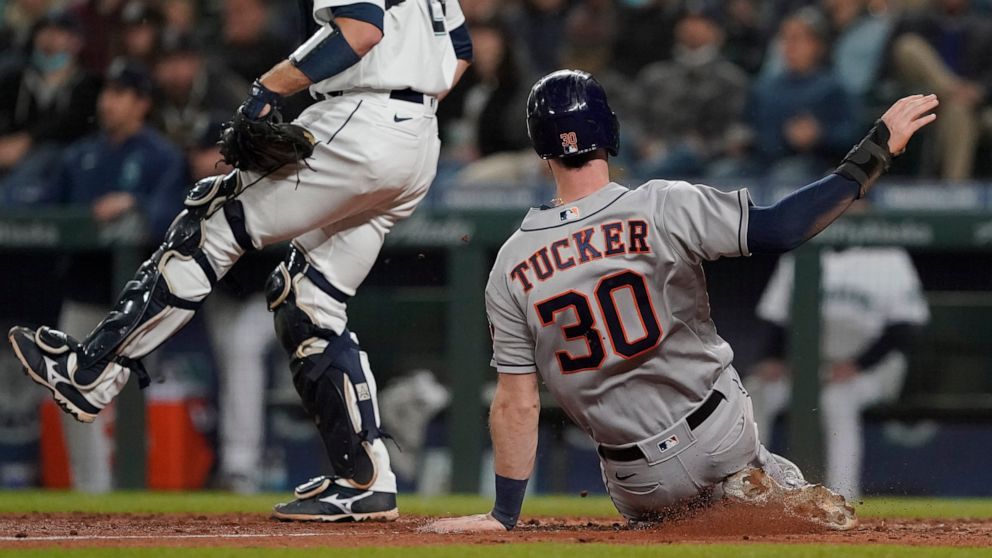 Mariners: If anything can derail the M’s push toward a playoff berth, it is the series against the Astros. Even at T-Mobile. The M’s lost 4-3 last night – squandering a 3-2 lead in the eighth – and have lost four of five games on the homestand. … They need offense. So they recalled Jose Marmolejos from Tacoma. He then hit a home run in his first at-bat back. He’s going to save them, right?

Seahawks: Whatever Pete Carroll saw from his corners in training camp, it wasn’t enough. Schneider traded for John Reid last week and Monday made another swap, getting former UW player Sidney Jones from Jacksonville. … Russell Wilson is a Tier 1 quarterback again. No. 4 overall on Mike Sando’s list for The Athletic.

Kraken: Brandon Tanev is a good guy to have on the roster and not just because of what he does on the ice.

• Today is the final day of August. We hate to see it go. It was always our favorite month growing up. Sure, there wasn’t any baseball but by the time the month started we had been playing since the first of the year (I grew up in the L.A. area, remember). So the respite was welcomed. As was the time at the lake. This was before forest fires seemed to consume the wild lands every year. Water skiing wasn’t for me, but sitting on the dock, reading, that was heaven. Sci-fi novels, mysteries, even books on my high school’s summer-reading list were devoured. (If you want to know, back then Isaac Asimov and Alistair MacLean were my favorite authors.) The best days. Lazy days. Wait, I just remembered. Each year we had to stain the outside of the cabin before we left. Prep it for winter. That was always a pain in the arm (only I didn’t say arm). Until later …