This one looked like most of Gonzaga’s easy victories so far this season.

It just didn’t feel like it for most of the first half, particularly when San Francisco closed within three points with just over 1 minute remaining. Those final 70 seconds offered a clear illustration of just how small the margin for error is for opponents hoping to hand the top-ranked Zags their first loss.

Gonzaga strung together seven quick points – the dagger a buzzer-beating 40-footer by Corey Kispert – and carried the momentum forward with a dominating second half for an 85-62 victory Saturday at the McCarthey Athletic Center.

The Dons did a lot of things right in the first half, riding senior guard Jamaree Bouyea’s slashing drives and sharp shooting behind the 3-point arc. They showed resiliency and hit several timely baskets to keep it close.

But San Francisco’s 19 minutes of hard work unraveled in a hurry. Gonzaga (10-0, 1-0 West Coast Conference) made the Dons (7-5, 1-1) pay for every mistake and completely stifled USF’s offense in the closing half.

The Dons kept it competitive behind Bouyea’s 16 first-half points. The Zags threatened several times to create a comfortable margin, but Bouyea wouldn’t let it happen.

Down 20-14, Bouyea worked free for a bank shot. Trailing 25-16, he zipped around Oumar Ballo for an easy basket. Bouyea’s 3-pointer cut Gonzaga’s lead to 40-37 with 1:10 left, but the Zags closed the half with a flurry that had to be deflating for the visitors.

Anton Watson made a pair of free throws and Joel Ayayi got loose on the break for a layup. Bouyea was whistled for a travel in the closing seconds, leaving just enough time for Kispert to catch an inbound pass in stride, dribble once and hit a pull-up 40-footer with Dons’ coach Todd Golden watching from 5 feet away.

“I was just excited to see him hit that shot and it was a big boost for us going into the half,” said guard Andrew Nembhard, who finished with 14 points and four assists.

The Dons never recovered and the Zags took off, scoring the first seven points of the second half to open up a 54-37 lead. Gonzaga led by as many as 29 points in the closing minutes.

The Zags shut down Bouyea in the closing half and kept running mate Khalil Shabazz in check throughout. Bouyea made just one field goal in the second half and finished with 18 points. Shabazz was 2 of 10 and scored seven points. 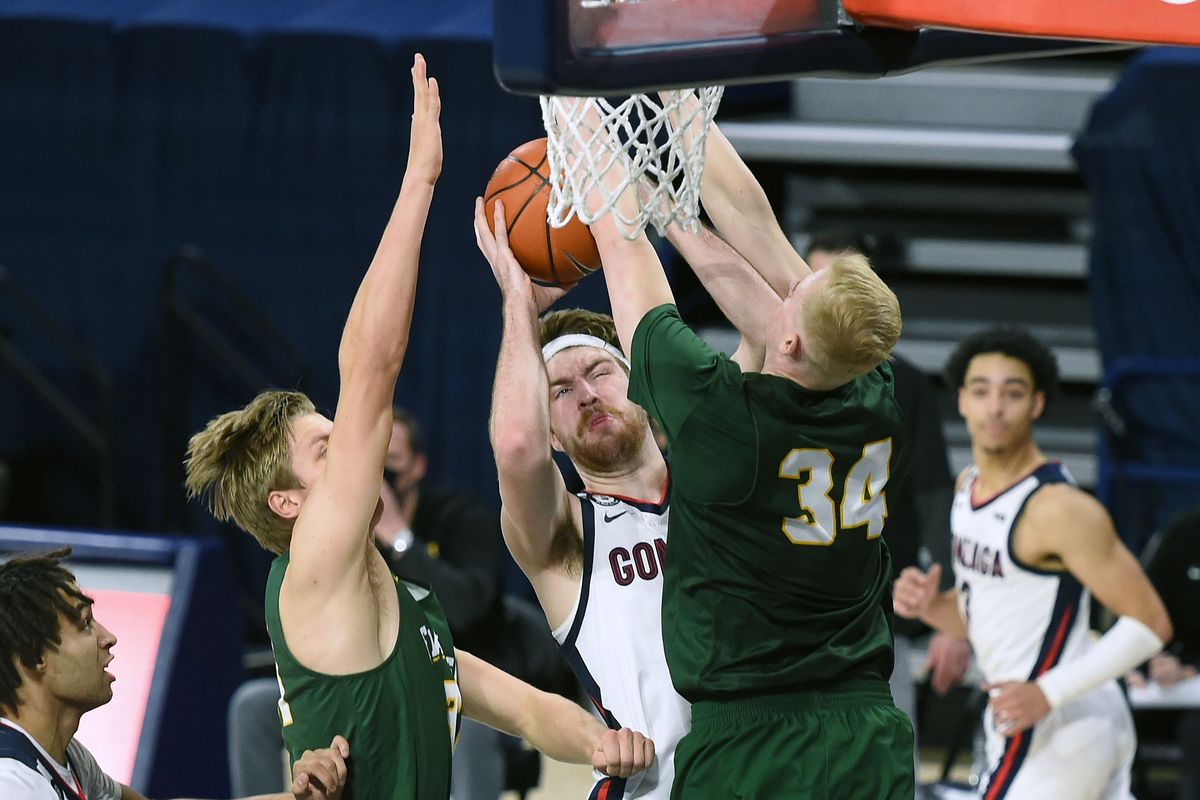 Gonzaga freshman point guard Jalen Suggs, returning from a two-game absence with a right leg injury, overcame first-half foul trouble and made things tougher for Bouyea on the offensive end. The Zags also did a better job of contesting Bouyea’s shots when he was able penetrate into the lane.

“We did a great job on Shabazz all night. He’s a really dynamic scorer,” Few said. “And Bouyea is just a good player. He had his way with us in the first half. We got Jalen back in there in the second half and he did a nice job guarding him.”

“Joel’s on a great run right now,” Few said. “He’s doing a good job of taking what the defense is giving him, and those numbers are showing that.”

The Zags made 52.6% from the field and racked up 23 fastbreak points. They converted 16 USF turnovers into 22 points.

The Dons managed just seven field goals in the second half after connecting on 14 in the first. Their shooting percentage faded from 54 in the first half to 25 in the second. San Francisco, which relies heavily on 3-pointers, had success early but finished just 8 of 23 from deep.

“We’re pretty confident in our offense that we’re going to get buckets when we want to,” Nembhard said. “The biggest deciding factor in the second half was we just stuck together and got stops when we needed to.”

Gonzaga has won 24 consecutive WCC openers and 20 straight in the series against USF.