Fire officials are investigating what caused the maintenance shop for a West Plains transportation company to go up in flames Monday night.

Firefighters dispatched around 5:20 p.m. to Victory Transportation, at 6207 W. Thorpe Road, arrived to fire coming out of the building on several sides. Crews were on scene until around 4 a.m. to ensure the fire was out beneath the debris, Spokane County District 10 Fire Chief Ken Johnson said Tuesday morning. Nobody was injured.

Victory Transportation utilizes more than 50 vehicles to offer various freight shipping services, according to the company website. Firefighters said the maintenance shop is a total loss, while a truck trailer, a backhoe and multiple semitrucks also were damaged. 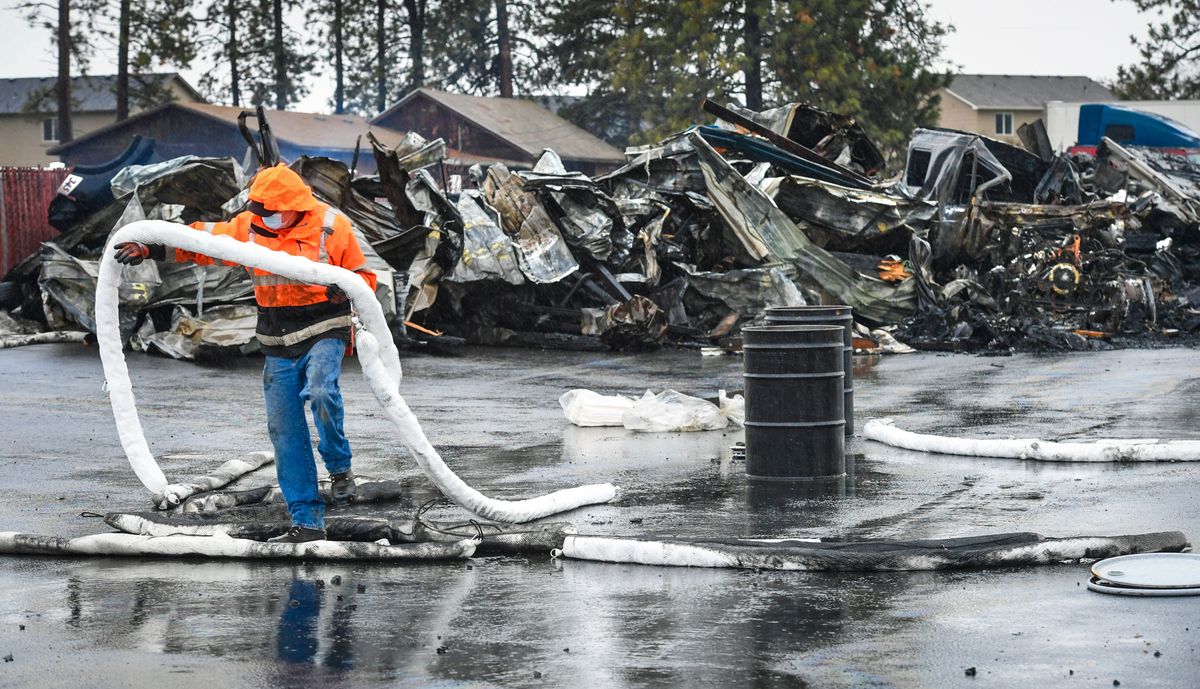 Kipp Silver, of Able Clean-up Technologies, Inc., places booms and pads to soak up and stop motor oil from spreading at the site of a fire at a building holding commercial vehicles, Tuesday morning, Ja. 12, 2021 at Victory Transportation on West Thorpe Road. The blaze broke out Monday evening destroying the structure and melting tote containers holding the oil. (DAN PELLE/THE SPOKESMAN-REVIEW)

The company was assessing the damage as of Tuesday morning, said owner Igor Chernetskiy. Chernetskiy said he was planning to meet with fire officials and insurance representatives.

“It affects either way because that’s where we do maintenance to our trucks, so we’ll try to find where and what to do to move forward,” he said. “At this point, we’re assessing all to be done and all that needs to be done.”

Nobody was inside the shop when the fire started, Chernetskiy said. Johnson said fire crews received a report that maintenance personnel went into the shop and discovered the area already ablaze.

“Anytime you have a well-advanced fire that got noticed after the fact, it’s hard to get ahead of that,” Johnson said.

Johnson said investigators believe there was at least 500 gallons or more of diesel fuel and used oil product that spilled from ruptured containers. Multiple explosions were reported.

Responding firefighters were keen on limiting water usage to prevent further spread of the petroleum products. Johnson said the resulting petroleum and water runoff went roughly 100 to 200 feet, draining out into dry wells approximately 25 feet from the property line. An on-scene hazmat crew helped absorb some of the runoff as the fire burned, he said.

Victory Transportation is paying for a hazmat team for additional cleanup.

Concerned with the fire potentially spreading to trailers stacked closely together near the maintenance shop, Johnson said fire teams used equipment to pull the trailers away once firefighters felt they had the blaze contained.

Johnson said crews then brought in an excavator around 9 p.m. to pull out metallic debris blocking the main parts of the fire “just like pouring water onto a roof.”

“Overall, the cooperation between the agencies was very well-coordinated due to the hard work over the years of mutual training, and all the crews are able to work together really well,” Johnson said.