BREWSTER – On the edge of a cherry orchard Thursday morning, under a smoky gray sky, Francisco Martinez and his crew milled about before starting work.

For Martinez, a crew supervisor, it was a routine morning. But once he started looking at the trees he saw things he’d never seen before.

Some of the Sweetheart cherries dangling from branches on the orchard’s border didn’t look right. They were wizened, skins wrinkled like big red raisins.

“This is my first time seeing that,” Martinez said in Spanish.

It’s the first time most in the Washington tree fruit industry have seen that, or at least so much of it.

A good portion of Washington’s cherries were ripe during the June heat wave and harvest was well underway. Cherries are notoriously fragile and multiple days of 110-plus degree heat caused significant damage.

Impacts to the state’s pear and apple industries – also the nation’s largest – aren’t fully known yet because those fruits mature later in the season. Still, it’s likely more fruit than normal will be sunburned and unmarketable.

The state’s fruit industry was unprepared for the unprecedented heat.

“This is memorably bad. … I’ve never seen anything like it and I’ve been around a lot of years,” Northwest Cherry Growers President B.J. Thurlby said. “It’s going to take a year to really determine what this did and what are the long-ranging effects of it.” 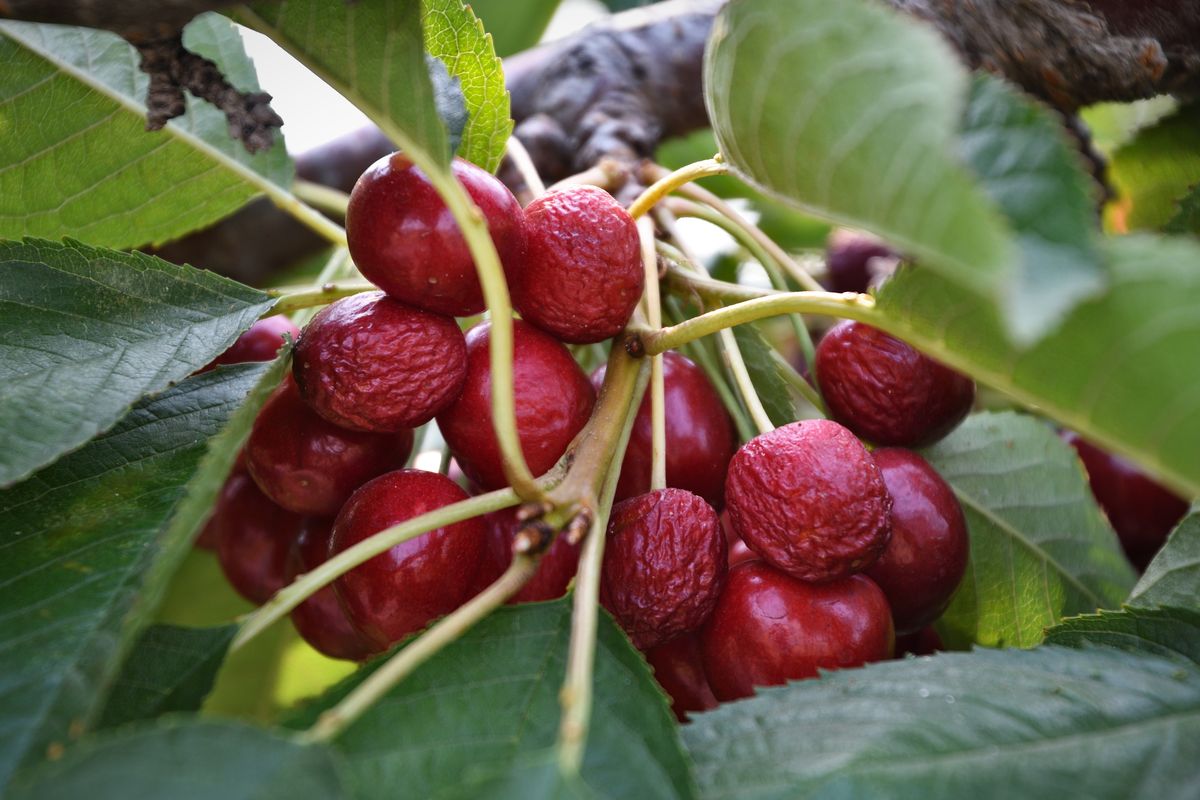 The summer’s high temperatures have affected cherry growers throughout Eastern Washington, as evidenced by these Sweetheart cherries seen shriveled before they could be harvested. Varieties picked earlier in the season fared better than those picked later in the summer. Impacts to the apple crop will become more clear in August when the harvest begins. (COLIN TIERNAN/THE SPOKESMAN REVIEW)

The thin strip of land along the Okanogan River north of Brewster is covered in dark green apple, cherry and pear trees as far as the eye can see.

On Thursday morning, the eye couldn’t see very far. Gray smoke hung over the orchards, blocking out the mountains to the west. Okanogan County looked mildly hellish, even as workers bustled about harvesting cherries and tending to trees.

“None of us like the smoke because you can’t put labor out there,” Thurlby said.

While smoke can slow operations, it doesn’t affect fruit much, experts say. Heat is the bigger issue.

“You want to try to stay below 90 degrees if you can,” Washington State Tree Fruit Association President Jon DeVaney said.

Growers have a few ways they can cool down fruit. Some orchards are covered in shade cloth, and watering the trees more can lower temperatures. With those tricks a grower might be able to drop an orchard temperature by 10 to 15 degrees.

But shade cloth is expensive and growers with junior water rights might not be able to increase their water usage during a heat wave.

Even without 100-degree temperatures, cherries are a bit of a diva in the fruit world. Something as innocuous as an ill-timed rain can damage them by forcing more water into the fruit and splitting it.

“They’re a lucrative crop, but it’s much more common to lose your crop to weather,” DeVaney said.

Cherry farmers might be used to crop losses, but what they’ve seen in 2021 has never happened before.

“I think this is the first time we’ve lost this much to heat,” Thurlby said.

When a cherry, especially a ripe one, sits out in 100-degree heat it can wither.

Cherries that weren’t on the edge of an orchard or exposed at the top of a tree stood a better chance of surviving the heat wave, as did the green, unripe ones.

“The cherries that are under the canopy, inside the tree, they did fine,” Grandy said. “We’re pleased with what we’re seeing.”

Thurlby and DeVaney said the fruit that wasn’t shriveled has been high quality.

On July 9, the Department of Labor and Industries issued an emergency heat rule. Employers have to provide shade – readily available in orchards – and cool down breaks every two hours when temperatures exceed 100 degrees. They also have to provide water, cool downs and training to prepare workers for temperatures over 89 degrees.

Many growers say it’s impractical to make people work in extreme heat anyway. For one, people aren’t very productive when it’s too hot. For another, cherries grow soft in the heat and can tear when picked.

“For both the workers and the fruit, you really don’t want to be picking much past 90 degrees,” DeVaney said.

Cherry growers have a narrow harvest window, too. Ripe cherries have to be picked within a few days. Heat wave or not, the June harvest couldn’t wait.

For many, the solution was harvesting at night or early in the morning. Workers donned headlamps and some growers scrambled to light their fields.

“It was more of a military operation than anything,” Thurlby said.

Not all growers suffered equally from the heat wave, said Tianna DuPont, a fruit tree specialist at the Washington State University Extension in Wenatchee.

Valicoff Fruit Co. owner Rob Valicoff in Wapato said some growers in his area lost most of their crop – much more than the industry-wide 20% figure. It all depended on timing.

“Guys that had earlier varieties, they got them all picked,” Valicoff said, but guys with later varieties “started to pick and then they quit picking,” because the fruit was burned and ruined.

Some growers took big financial hits, but lots of cherries still made it to market.

“There’s still a plenty big crop of cherries,” DeVaney said. “You were looking at a good-size cherry crop to begin with.”

They were better equipped to handle the heat wave for a couple of reasons. First, most apples don’t mature until mid-August at the earliest and unripe fruit fares better in heat.

Second, apples – and pears – have thicker skins, which makes them more heat resistant.

Still, the historically hot days in June destroyed some apples. On the edges of Okanogan County orchards, some apples dangling in the sun have been scorched black.

In a few weeks, once harvest begins, it’ll be more clear just how many apples were ruined by sunburn.

“That’s the million-dollar question,” Washington Apple Commission President Todd Fryhover said. “We have a lot of time for growth, so we’ll have to wait and see what happens.”

In addition to sunburn, the heat will probably affect the size of some apples, Fryhover said, and with apples, size matters.

Different sizes have different markets and values. The heat wave could have stressed trees, meaning some growers will be selling smaller apples.

In some cases, that could benefit a grower, Fryhover said.

Fryover said he’s waiting to see how stress caused by this summer’s heat might impact Washington apple trees beyond this summer.

“We’ve never seen these temperatures in June, so we really don’t know what the impact is going to be long-term for the trees,” he said. “When it gets this hot, a lot of these trees in the orchards have a tendency to go into protection mode. They’re really concentrating on taking care of their roots and surviving.”

Growers today might not live to see another week with several 110-degree days.

Thurlby said that after this year’s experience, it’s possible more growers will be willing to absorb the up-front cost of installing shade cloth. He also noted that farmers might develop more finely tuned watering patterns that work best to lower orchard temperatures.

Tree fruit farmers will have to be ready to tweak their operations if more hot summers come.

“Once you see a black swan you know that exists,” Thurlby said. “Obviously it happened so it can happen again.”