DE SMET, IDAHO – On the back of his 2011 Majestic E-450 off-white RV, Duane Garvais Lawrence had “MMIW” written on top of the back window in red ink. Below it, 77 names of Native women were neatly written.

“We have about 30 more names to add onto this list today,” he said, referring to new names delivered to him by tribes in Washington and Idaho. They are the names of murdered and missing Indigenous woman from across the Pacific Northwest and beyond. “We’ll add them after the run today.”

Native members and supporters came to show solidarity for the murdered and missing Indigenous women in the 2021 MMIW Bike Run, which stopped in De Smet Tuesday morning.

Garvais Lawrence created the event after he read the Savanna’s Act, a set of law enforcement and justice protocols to address missing or murdered Native Americans, most of whom were women.

“It impacted me as a father,” he said. Garvais Lawrence counts five daughters among his seven children with his wife, LoVina Louie.

Garvais Lawrence set up the inaugural run in the past year, without many supporters due to the pandemic. He persisted, noting that violence against Native woman has been a dilemma for centuries. In modern times, Native women are 10 times more likely to be kidnapped or murdered with little to no conviction rates, according to U.S. Department of Justice research.

The cross-country run, which started in Olympia at the Washington State Capitol, will end in Washington, D.C. The goal is to meet with Deb Haaland, Secretary of Interior and first Native American to serve as a Cabinet secretary. In that role, Haaland oversees public lands, national parks and wildlife refuges, as well as the Bureau of Indian Affairs.

“We want to sit down and talk with her to see if we can create some kind of new law or legislative action, where if you’re the U.S. attorney, and I bring a case to you, it won’t be included in their prosecution record,” Gervais Lawrence said. “If they know these cases (about missing and murdered Native women are) not going to give them a chance of winning, they’re not going to take the case.”

Tuesday’s run in Idaho started at the Sacred Heart Mission church through reservation land and ended 40 miles north in Fighting Creek. Before the morning run, Garvais Lawrence and the community members performed a tribal ceremony. 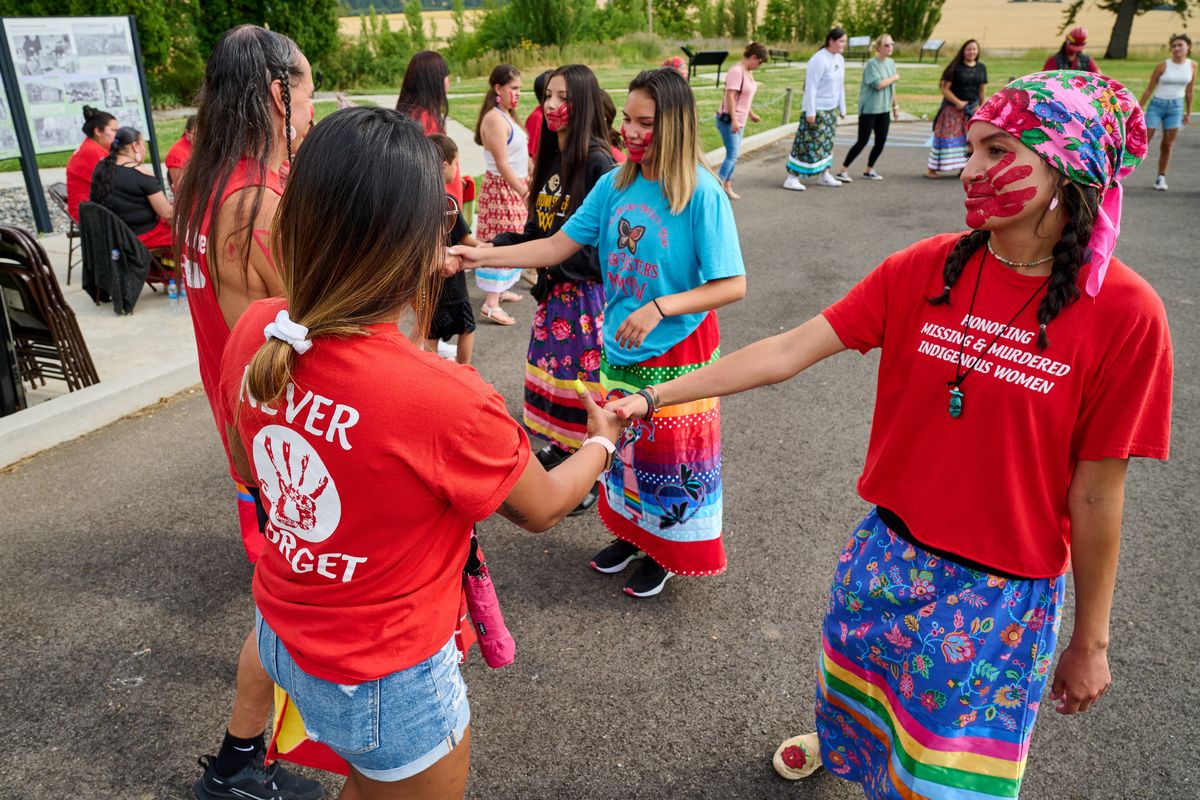 Garvais Lawrence, part of the Colville and Assiniboine Sioux tribes, and his eldest daughter, Daisy Garvais, squeezed red paint on their hands. Red represents the blood that binds tribes, but also the blood shed of the women who’ve vanished.

“This color is violence but strength and love, too,” Daisy Garvais said. “Red is a powerful color in Native culture.”

University of Washington runner and Cowlitz Tribe member Rosalie Fish popularized the red hand symbol after running at the 1B Washington State Track and Field Championships in Cheney in 2019. The hand print is placed on the mouth, a symbol of how Native woman are taken from behind and shoved into vehicles, never to be seen again.

“Ain’t that a healing?” Lawrence asked. Native cultures see rain as a symbol of renewal, change and growth.

But for Coeur d’Alene Tribe member Marlene Sproul, who stood nearby as the rain fell, an overwhelming wave of pain and grief lingered. Her younger sister, Tina Marie Finley, went missing on March 7, 1988.

“We still haven’t located her and it still hurts,” Sproul said. “They said this stuff is healing, but the pain never goes away. It’s a hole in your heart that can never be filled.”

The run was a reminder, shedding light to individual plight, but a puzzle piece of the generational violence and trauma that permeates the Native population.

“We’re all one tribe, all married to one another and connected as relatives,” Sproul said. “When one person goes missing, we all feel it. We all know where that person lives and the family that person belongs to it. It’s a chain reaction amongst all of us.”

After moving behind the church, the ceremony began with Louie’s tearful dedication to the 3,213 bodies of Native children recently found in mass graves at American and Canadian boarding schools. She decorated eight arm bands for runners to wear during their checkpoints, which are set to be delivered to Haaland when MMIW travelers arrive in Washington, D.C. Her parents, Jeanie and Deb Louie, who attended the ceremony, both survived boarding schools in their adolescences.

“We can only pray that the murdered children and missing and murdered women were reunited in the spiritual realm,” Deb Louie said.

Gene “Hemi” James, the secretary-treasurer of the Coeur d’Alene Tribal Council, honored his mother, who was murdered by her non-Native boyfriend on June 10, 1995. Native youth performed traditional and ceremonial songs before the run as elders led prayer songs. After the ceremony, eagle feathers, a symbol of Louie and Garvais Lawrence’s partnership, family ties and tribal connections, were given to those who participated in the 40-mile trek to Fighting Creek. Sproul and her sister, Debora Garcia, and niece Mandy Long, carried the eagle feathers first, as Finley’s closest relative.

“This run is for Tina Marie Finley,” Garvais Lawrence reminded the group. “Think of her every step. Every inch is for Tina today.”

Tina’s family walked down Moctelme Road and passed the feathers to supporters right before Desmet Road. Runners tied the eagle feathers into their hair and continued the journey in Finley’s honor, 40 miles away toward Fighting Creek, and 2,504 miles miles away from Haaland’s desk in the nation’s capital.