Where: You can find musicians at three locations.

Playing chamber music on a street corner comes with some acoustical challenges.

For instance, a violinist might be drowned out by an idling semi. Or a construction crew’s heavy equipment could make it hard for the players to stay in sync.

The Sforzando Quartet hadn’t played a street corner before, so the four members had to work out some kinks Monday when they got together in downtown Spokane near the corner of Main Avenue and Browne Street.

“Can you two play louder?” cellist Janee Ko asked violinists Catherine Treis and Jessie Morozov after the group played the first movement of Mozart’s “Spring Quartet.” “I can’t hear you.”

Even if they couldn’t always hear each other, the quartet of Treis, 19, Morozov, 12, Alexis Mérane Hart, 15, and Ko, 15, gave passersby an impressive performance during opening day of Street Music Week.

Former Spokesman-Review columnist Doug Clark started Street Music Week in 2002. Every year during the second full week of June musicians busk from noon to 1 p.m. in downtown Spokane, the Garland district and on Sherman Avenue in Coeur d’Alene.

This year’s Street Music Week will run through Friday .

All donations buskers receive go to Second Harvest, a local nonprofit that provides food to food banks throughout Eastern Washington and North Idaho. Since its inception, Street Music Week has raised nearly $275,000 for the organization.

Street Music Week was held virtually last year due to the COVID-19 pandemic, but the event still managed to raise $27,000. 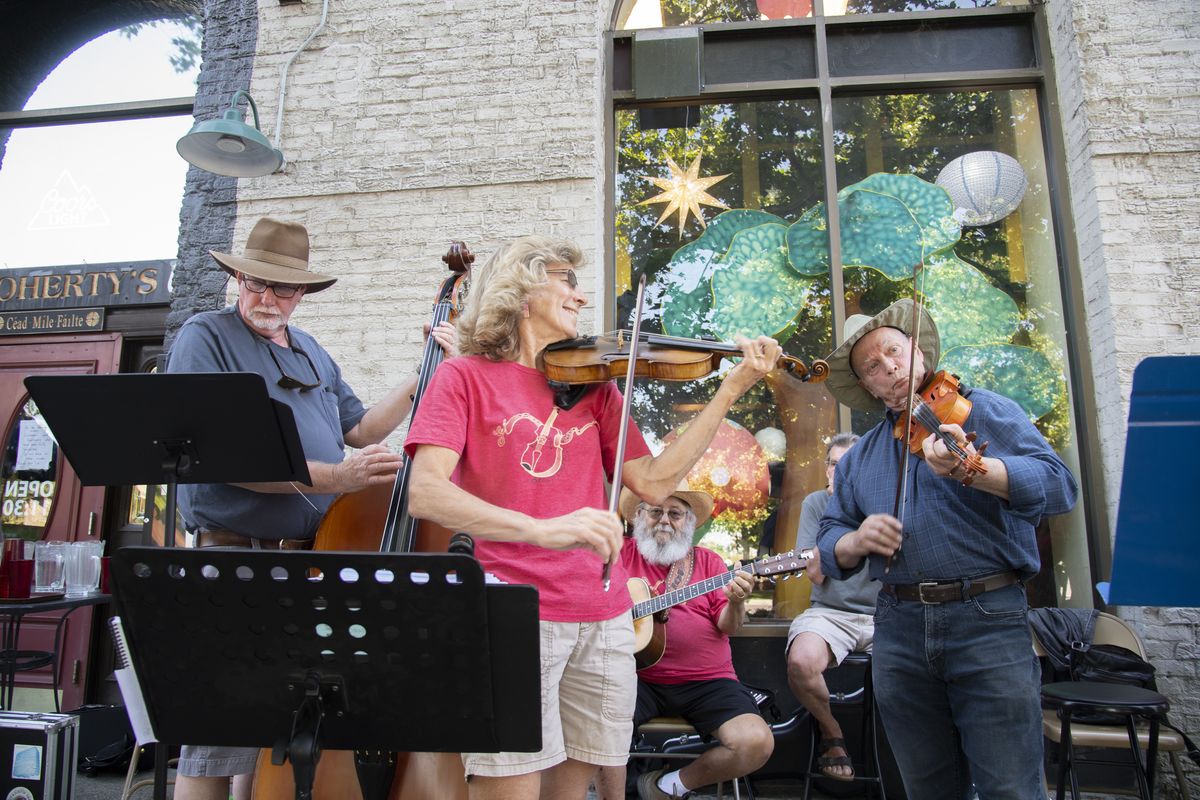 Anyone can sign up, grab a red donation bucket and play music in the street for charity, Clark said, adding that Street Music Week is “about generosity, not virtuosity.”

The quartet members weren’t sure what to expect of Street Music Week. They hadn’t participated in it before.

It turns out they enjoyed playing for an unprepared audience.

“Whoa, that was fun,” Treis said after one song.

At the end of the performance, Hart, a violist, agreed.

“An hour went by really fast,” she said.

At first, people walking by the Sforzando Quartet didn’t seem to realize how talented the young girls were. Only a few stopped to listen.

As the hour wore on, more people walking to and from lunch realized it was worth stopping to hear the girls play Mozart or Antonin Dvorak’s “American Quartet.” At any given point during the second half hour about six people stood listening on the sidewalk.

The donations began to pick up as 1 p.m. drew closer. The musicians’ red bucket ultimately contained about $60 for Second Harvest.

“I was worried we wouldn’t raise anything,” Hart said while the group packed up its instruments.

“It helps to be young, I think,” Treis said with a grin.

It helps to be good, too.

Near the end of the performance, one audience member paid the quartet a high compliment: She offered them a paid gig.

“I run the Spokane Farmers Market,” Diane Reuter told the quartet. “We’d love to have you. You guys are awesome.”