A fire at St. Charles Catholic School in northwest Spokane overnight that led to extensive damage to the school building is now being investigated by a trio of law enforcement agencies.

The Rev. Esteban Soler was sound asleep after a long trip home from Argentina, where he was visiting family, when he awoke to the sound of someone banging on the door to the rectory.

It was a Spokane police officer alerting Soler that the building was on fire.

“He was deep in his sleep and the pounding on the door, which is the police officers, woke him up,” Bishop Thomas Daly of the Diocese of Spokane said when he came to see the damage. 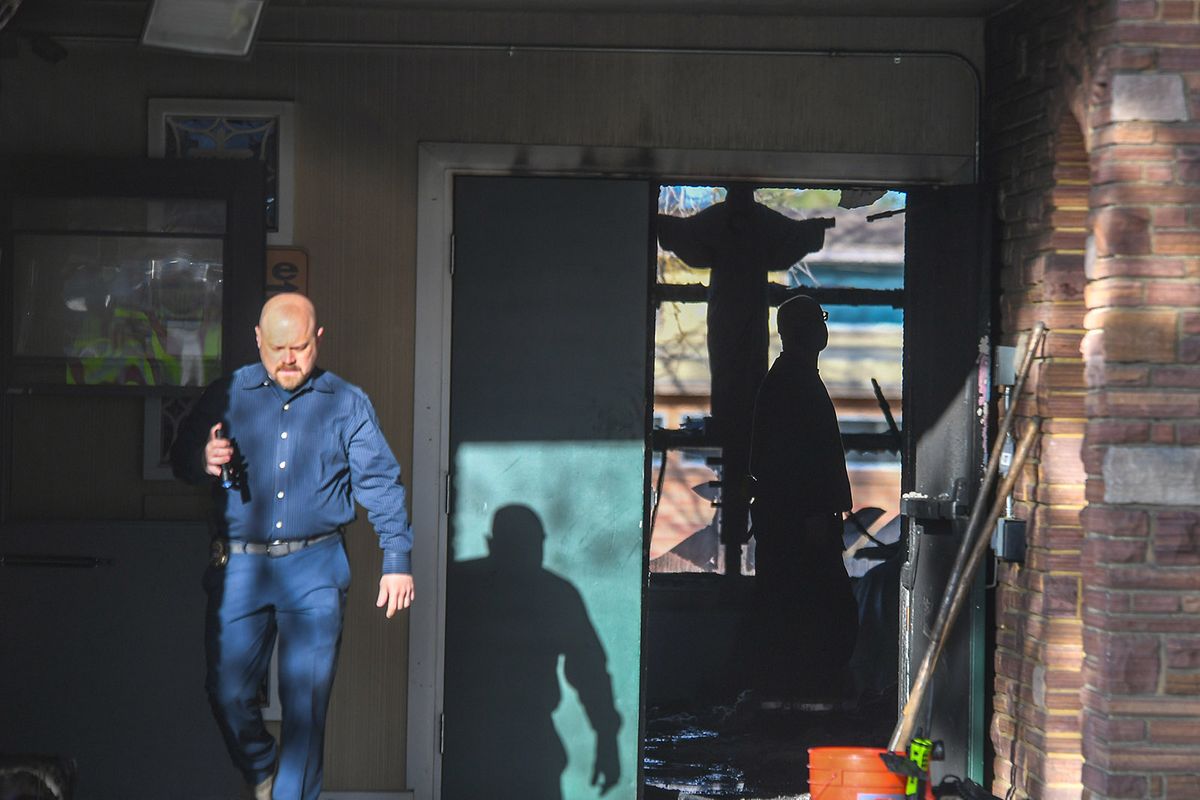 Investigators leave the scene of a fire at St. Charles Catholic School in this photo from March 18, 2021. A suspect, Rio Antonio Mirabal, was indicted on a federal charge Wednesday in connection with the fire. (Dan Pelle/THE SPOKESMAN-REVIEW)

The officer was parked in the school’s parking lot when he saw signs of the fire and called it in at about 1:30 a.m., said Deputy Chief Julie O’Berg with the Spokane Fire Department.

“He was able to knock on some doors and make the call into the fire department,” O’Berg said.

Soler was the only person in the residence and was able to get out unharmed, O’Berg said. No one else was injured.

Spokane Fire Chief Brian Schaeffer said “aggressive firefighting” stopped the fire from spreading into the school’s middle wing and the north wing, where the sanctuary is located.

The Spokane Fire Department, with the Spokane Police Department and the Bureau of Alcohol, Tobacco, Firearms, and Explosives, are investigating the fire.

The school has security cameras, and there was a suspicious person spotted on campus last night by volunteers preparing for a school auction fundraiser, Daly mentioned.

While Schaeffer said it was too early to indicate the cause of the fire or whether it was set intentionally, Daly said there is concern St. Charles could have been targeted. There has been some vandalism at the church in the past, but nothing involving the school, Daly said.

“Sadly, there was the vandalism of the synagogue and there has been an increase in vandalism in Catholic churches, schools, statues in the country in the last year or so,” Daly said. “It’s always a worry that, is this part of a trend where people are targeting houses of worship?”

Temple Beth Shalom on Spokane’s South Hill was vandalized last month. A self-identifying neo-Nazi has since been arrested and charged with crimes related to the vandalism.

A Catholic church in Bonners Ferry was burned to the ground in an arson fire in 2017, and more recently two Brewster churches, including one Catholic church, were damaged in an attempted arson.

As of about 6 p.m. Thursday, O’Berg said the cause was still under investigation and any theories “are speculative.”

“We’re calling it suspicious” she said.

The diocese plans to re-evaluate security at its other schools.

The south wing of the school, where classrooms and school offices are located along with the rectory, sustained significant damage, Schaeffer said.

The original wing of the school building was built in 1950. The fire ravaged most of that original south wing, spreading through the attic.

“The church itself was constructed in kind of an award-winning European architecture,” Daly said.

An additional three wings were built and opened by 1957, including the one where the church sanctuary stands.

The sanctuary and the large-scale works of art by Spokanite Harold Balazs were spared.

This year, St. Charles has taken on a new classical model of education, which has increased its enrollment numbers, Daly said.

“The whole kind of parish complex has been, you know, it’s kind of a renewal,” he said. “So this, this comes at a time of a great challenge.”

There has been a “tremendous rebound” this year under Soler’s leadership, said Ron Hardin, a member of the parish’s finance committee. Soler has continued to make sure the school has a strong focus on not only faith but academic excellence, Hardin said. The approximately 130 students in grades K-8 have been back in person full time for several months.

When it comes to fixing the damage and getting children back in the classroom after the coronavirus pandemic sent them home, it was too early Thursday morning to have a solid plan in place, Daly said. School officials plan to use the virtual learning already in place due to COVID, along with support from surrounding Catholic schools, in making future plans, Daly said.

Daly estimated the damage to the building was about $2 million.

Financially, Hardin said the parish and the school are in a good spot and are confident in their insurance. Soler said the administration declined to comment at this time.

The best way for the community to help is to stay vigilant, Daly said.

“Obviously prayers, support and vigilance,” Daily said. “So that no other place of worship, no other school, another place where people gather that are very essential to the well-being of our society, are under attack.”