Pat Thompson didn’t set out to change the world. She just took it one step at a time.

Thompson, 68, was born in Texas, after her father, an Air Force man, met her mother in Japan.

“As I tell people, I was started in Japan and born in Texas,” Thompson said.

By the time Thompson started kindergarten, the family had moved to Spokane, where she spent most of her childhood. They moved away before Thompson went into high school but eventually returned. In the early 1970s, she headed off to Washington State University, unaware that she would become Spokane County’s first female prosecutor and a key member of the team that put the South Hill rapist behind bars.

Thompson had no idea what she wanted to do as a career, but she loved political science after taking a civics class in high school.

She graduated in 1974 with a degree in political science, still unsure of what she wanted to become. So she decided to put the “real world” on hold for three more years and go to St. Mary’s University in San Antonio.

Law school was “a lot of work,” Thompson said, but she graduated in 1977. Then she headed back to Spokane to take the bar exam, only to fail by just one point.

Thompson decided to appeal one of the questions and, after much anxiety, she won and officially became a lawyer.

She applied at the Spokane County Prosecutor’s Office and was quickly granted an interview with then-prosecutor Donald Brockett.

The day after the interview, she got a call offering her the job, Thompson remembered. Trying not to be “overly anxious” she told them she would have to think about it.

“I was like, ‘Is this what I want to do?’ And then after I hung up and everything, I thought – ‘Oh am I kidding myself?’ ” Thompson recalled.

She took the job.

“I was the first woman prosecutor hired in Spokane in 1978,” Thompson said. 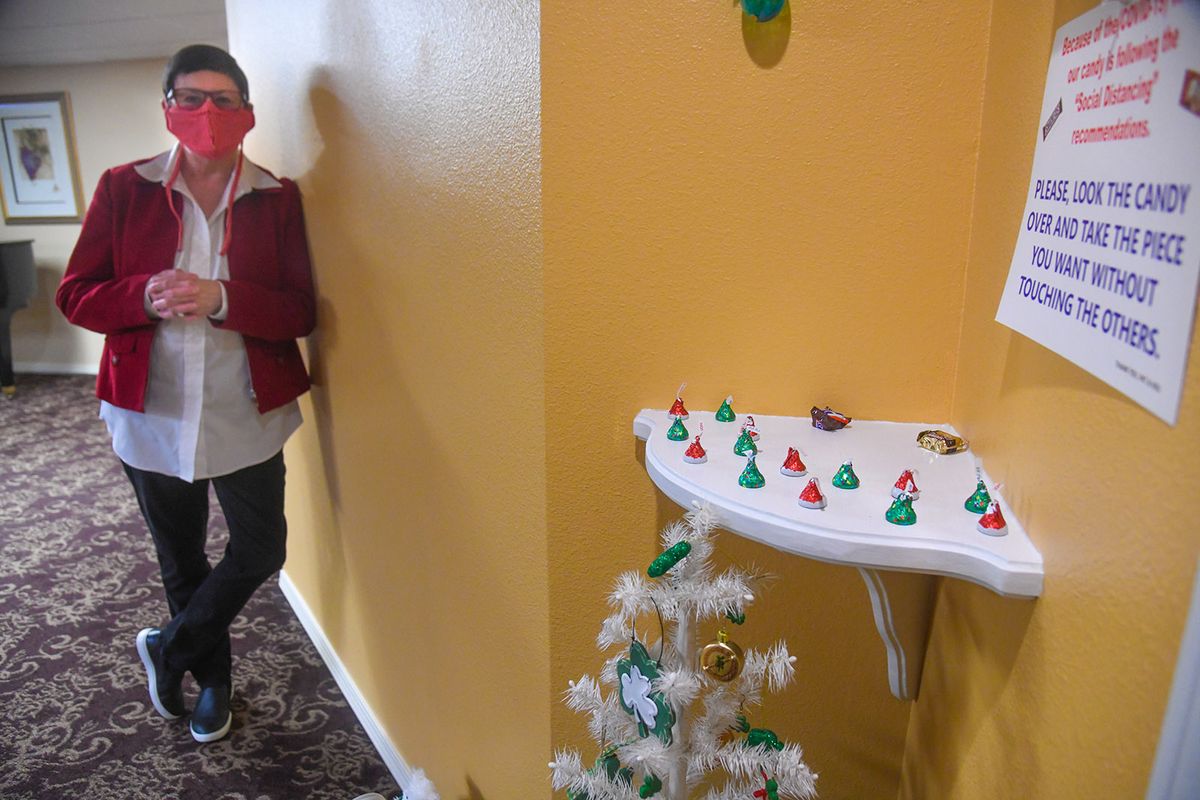 Pat Thompson offers candy treats to passersby outside her door at TouchMark on South Hill in Spokane. (DAN PELLE/THE SPOKESMAN-REVIEW)

At that time the juvenile court had just expanded, creating a need for more attorneys. Thompson jumped in immediately.

“In the morning I’d come in and I’d get my stack of files, and head off to court, and that was my morning docket,” Thompson said. “And I’d come back at lunchtime and get my second set of files for the afternoon.”

She quickly befriended the secretaries at her office, whom she called “the most important people” in any office.

“They are probably the most important link in terms of you being able to do your job,” she said. “You may be the one that supposedly gets all the glory going into court and all that stuff, but they’re the ones that make you look good.”

Thompson loved to keep a pulse on the office with a little candy dish on her desk.

“I learned that you can tell how well everybody’s doing by how fast the candy goes,” she said.

After a year in juvenile court Thompson was promoted to adult court, still the only female prosecutor in the office.

Thompson remembers the attorneys gathering in the library/conference room for lunch.

On one day in particular, Thompson had been working in the office for a while and was having lunch and doing her counted cross-stitch, just like most days, she said.

One of the attorneys started to tell a joke before stopping to say he couldn’t tell the joke because Thompson was there.

“I remember saying, ‘Don’t you use me as an excuse for not being able to tell a joke,’ ” Thompson said. “ Because if that’s the case, I say you shouldn’t be telling this joke whether I’m a woman or not because you have to put that type of caveat on it.”

That’s when the other attorneys realized Thompson had some “gumption,” she said.

About two-and-a-half years into the job, Thompson was asked by Brockett to be the second chair on the case of Kevin Coe, who was better known as the “South Hill Rapist.”

Coe was accused of raping numerous women, ranging from teenagers to women in their 50s, on Spokane’s South Hill.

Thompson was shocked that as a “newbie” she was asked to work on the already infamous case but took it in stride. She went with many of the victims to identify Coe in lineups.

“It made your heart sort of cry for them,” Thompson said. “Because you could see that it was hard for them, it was traumatic for them to come in and think they were maybe going to see the person who had raped them in such violent and terrible ways.”

Then Thompson had to help decide which cases they could prove beyond a reasonable doubt. Ultimately, they only charged six of the cases.

“It was clear to me that he had done a lot more,” Thompson said.

Thompson was thorough when doing her job, even going to the places where the rapes took place in order to better visualize what happened.

The case went to trial in 1981, and Coe was convicted on four of the six counts.

“I had great admiration for the victims and their willingness to come forth and testify,” Thompson said.

After that case people recognized her ability to handle difficult cases and that she knew her way around the courtroom, Thompson said.

She became what she called the “sexpert” handling many of the sexual assault and abuse cases that came into the prosecutor’s office.

“I think a lot of it had to do with the fact that I was a woman,” Thompson said of taking the cases.

One of Thompson’s proudest moments was getting a three-and-a-half-year-old girl qualified to testify in a sexual abuse case. After building trust with the little girl and her family, Thompson was able to get a conviction that withstood appeal, largely based on the child’s testimony.

In 1984, Coe’s convictions were overturned because some of the victims were hypnotized before identifying Coe. In 1985, Thompson went to trial again hoping to get Coe convicted.

He was found guilty of three counts of first-degree rape in February 1985. In 2006, Coe was civilly committed as a sexual predator. Then in 2008 he was declared a sexually violent predator and committed to a special confinement center on McNeil Island, where he remains today.

Thompson was careful to keep every little piece of information from both trials, with the help of the valued office secretaries. That attention to detail helped when Coe was facing civil commitment, she said.

By that time, Thompson herself had moved to the Washington State Attorney General’s office after 19 years at the prosecutor’s office. She practiced labor and personnel law for 16 years before retiring.

Thompson met her husband, Neil Korbas, at the prosecutor’s office and the pair became friends.

It was “just a friendship that grew,” Thompson said.

“I always said life began at 40,” Thompson said. “And that was when life began, when I got married, to the love of my life.”

After a few years of post-retirement traveling, the pair settled at Touchmark on Spokane’s South Hill, close to Thompson’s mother, Selma, who lives in the memory care unit.

Thompson still has her candy dish set up out front of the couple’s apartment door. Now it’s decorated for each holiday and season as a way to cheer up the couple’s friends and neighbors.

“I suppose I view that as part of my public service,” Thompson said.

While seeing a woman prosecute a court case today isn’t a novelty like it was when Thompson started, she believes the job is still the same at its core, even with all that helpful new technology.

The advice Thompson gives young attorneys remains similar to her goals: “Do your best, be authentic and know you will get the respect that you give to others.”