You could smell the lilacs every few blocks as you walked through the streets. Trees were bursting with purple, white and pink blossoms. The clouds were puffy and the sky was blue.

It was immaculate Bloomsday weather on Sunday. But the atmosphere for the footrace celebrating its 45th year wasn’t quite right. The streets were too quiet, the crowds too small. 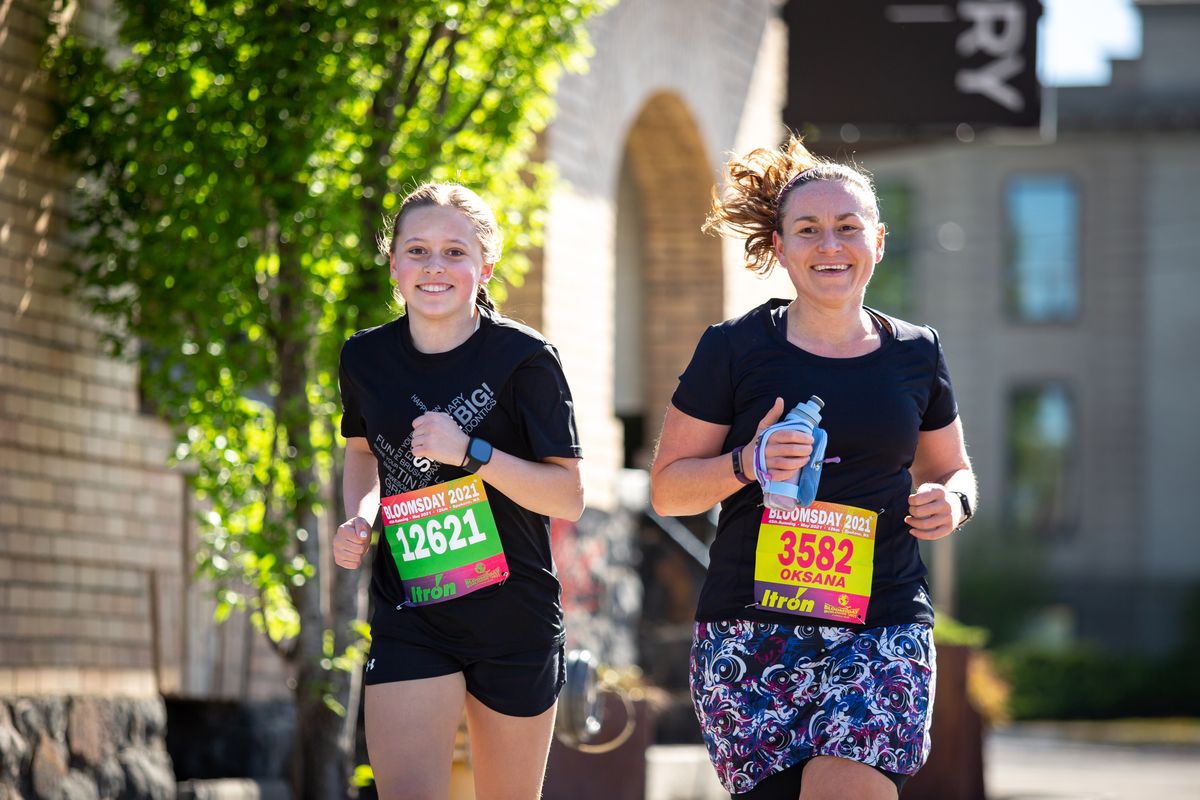 Although the streets weren’t blocked off for Virtual Bloomsday, many Bloomies appeared to enjoy keeping the traditional course, date and time on Sunday, May 2, 2021 in Spokane, Wash. In order to allow for social distancing to prevent the spread of Covid-19, he virtual race could be completed anywhere in the world, as long as registrants completed a timed 12K distance, in order to receive their Bloomsday shirts. (Libby Kamrowski/ THE SPOKESMAN-REVIEW)

The COVID-19 pandemic forced organizers to make this year’s Bloomsday virtual – just like 2020’s race that was pushed back to September. Participation was down.

Still, for the people who ran or walked the race, enthusiasm was high. Everyone was as eager to get their finisher T-shirt as always.

Tapp, a lifelong Spokanite, has run Bloomsday every year since 2004. She ran the race with her fiancee James Biddle this year. Her bib said “Bride;” his said “Groom.” Biddle ran Bloomsday twice this year, once on a track then again on the streets with Tapp.

Bloomsday Race Director Jon Neill said Bloomsday went well on Sunday, even though it was virtual. Some people will still be running their virtual races through next Sunday.

“When you see the smiles, and you see the cheers, and you hear the cowbells ringing, it fills your cup, even though we’re virtual this year,” Neill said. “Today was really special.”

Neill said Bloomsday had 21,400 registered participants as of Sunday. People from 20 countries and all 50 states participated in the event.

Gwenn Kubik and Debbie Wiseman ran the Bloomsday course backwards this year. They said going against the tide of people made cheering and the high-fives even more exciting.

Some questioned their decision to run the course in reverse.

“Nothing to do with Doomsday Hill?” Jim Nania teased them with a grin, referring to the difficult uphill in the race’s final third made easier as a downhill.

Sunday was Nania’s 42nd Bloomsday – he’s run the race every year since he moved to Spokane in 1980.

“It’s been my favorite holiday in Spokane forever,” he said. “It’s a great Spokane tradition.”

Nania used to be faster, though.

“I now run like the people I used to laugh at,” he joked.

It’s almost depressing to look at his race times over the years, he said. He plotted them once on a graph and didn’t like the trendline as he got a little slower, year by year.

Floyd McComas hasn’t missed a Bloomsday. He’s a perennial, having run in the inaugural race back in 1977. There were only about 1,200 people running back then, and he has watched the event grow over the years.

‘The rhythm of 20,000 runners’: Bloomsday participants who haven’t missed a race in 45 years meet again

The perennials gathered Saturday, as the 45th running of Bloomsday kicked off. The virtual race will run through next weekend.  | Read more »

Like Biddle, McComas wasn’t content with doing Bloomsday just once. He ran it on Saturday, then walked it Sunday.

Many Bloomsday runners have their own annual traditions. Even during the pandemic, with a virtual Bloomsday, many tried to keep those traditions going.

JoAnn Stewart and Jobie O’Neil walked briskly down Broadway Avenue in the early afternoon. This Bloomsday was special for Stewart, because she dedicated her walk to her granddaughter, Kassie Dewey, who was killed April 12 in Spokane.

As the duo pulled closer to the finish line, O’Neil stopped. She pulled out her phone, searching for something: the theme from “Rocky.”

You can’t finish Bloomsday without listening to the “Rocky” theme, O’Neil explained. Just because it isn’t blasting from the speakers near the intersection at Monroe and Broadway avenues doesn’t mean you can just skip it.

You have to do Bloomsday, O’Neill said with a smile.

“If you don’t, you feel like a total loser watching everyone go.”