One is a mere quarter-acre full of pines and boulders at the north end of Dishman Hills.

Another is a slightly disheveled half-acre along the Spokane River in east Spokane Valley.

The third sits west of the railroad tracks in the southern part of the city: A 17.7-acre, vaguely semicircular piece of land, undeveloped and half-covered in ponderosas.

Spokane Valley City Council agreed this month to buy all of these properties. 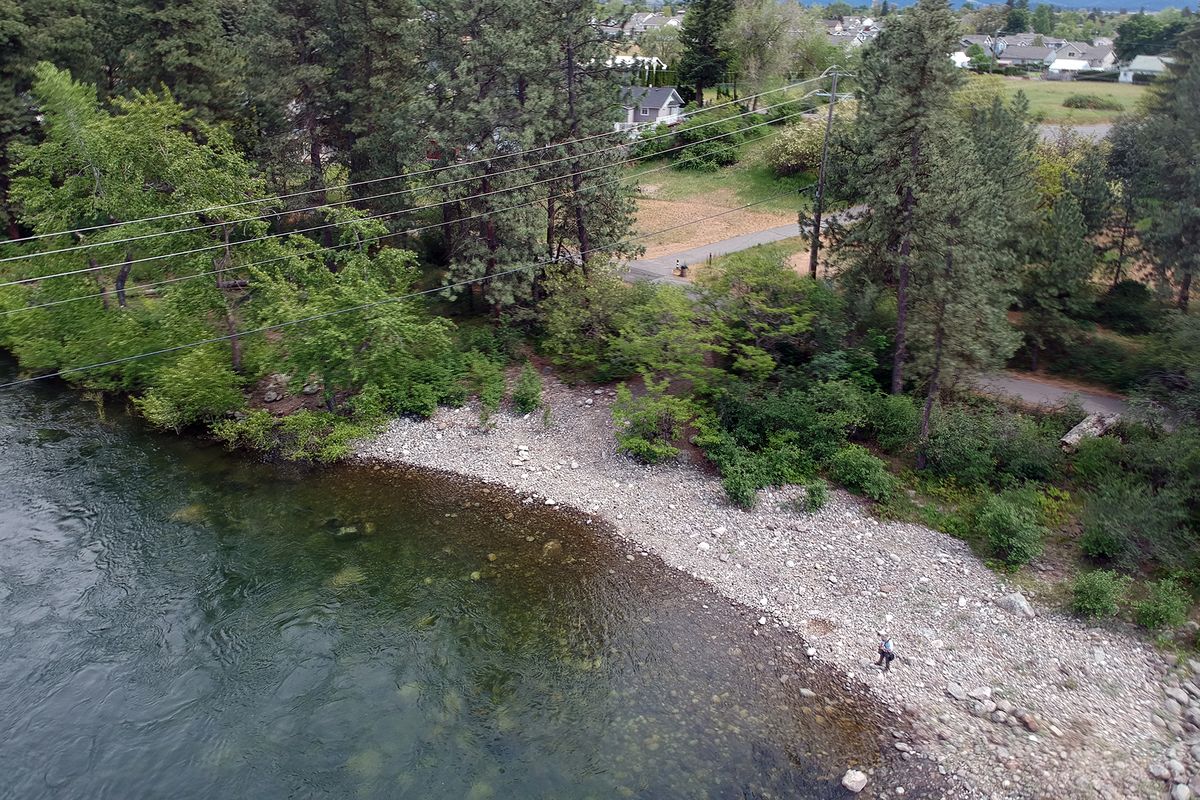 One of the three parcels that Spokane Valley will purchase is a strip of land near the Spokane River, along the Centennial Trail at Flora Road, which in long term planning may lead to a pedestrian bridge which will lead to city land on the north side of the Spokane River. (Jesse Tinsley/The Spokesman-Review)

There isn’t much of anything on them right now, but each of them could be critical for Spokane Valley parks and recreation in the coming decades.

Hattenburg said the chance to buy all three properties was “an opportunity we couldn’t pass up.”

These purchases will help the city expand trails, improve park access and create a new park. Both Hattenburg and councilwoman Linda Thompson said acquiring the properties was personally meaningful to them.

Spokane Valley will pay $42,000 for the lumpy quarter-acre, which sits at the northeast corner of the Dishman Hills Natural Area. The county would have surplussed the property if the city hadn’t wanted to buy it.

This tiny bit of land, about 1,000 feet northwest of the main Dishman Hills trailhead, will be an important connecting property, a piece of the puzzle as the city works on finishing its Appleway Trail project.

Spokane Valley has spent the last six years extending and adding to the Appleway Trail, a paved walking and biking path that runs parallel to Sprague Avenue through the heart of the city. The current trail goes all the way from University Road to Liberty Lake.

The city is extending Appleway Trail from University Road to Farr Road this year, but the plan is to eventually have the path go all the way to Dishman Hills.

This piece of land will help the city make that connection. The land will be used for trail segments and infrastructure to handle stormwater.

John Bottelli, Spokane Valley’s parks, recreation and facilities director, sees a lot of potential in the 0.45-acre parallelogram of land at the corner of Flora Road and Montgomery Avenue.

The goal for this $286,000 parcel – which is also Spokane County property – is more ambitious than the Dishman Hills piece.

Bottelli said the hope is to build a parking lot, trailhead and pedestrian bridge here.

“That piece is really critical,” he said.

The bridge would stretch from the Centennial Trail across the Spokane River to the 45 acres of land the city bought last year from the Washington State Department of Transportation for more than $2 million.

Those 45 acres were once used as a roadkill dump, but the land’s undeveloped and the city intends to turn it into a park. Adding that land will grow the city’s park system 20%, from roughly 250 to 300 acres.

The 0.45-acre piece will be a key access point to the property, helping people who live south of the river cross the water to enjoy what may someday be a crown jewel of the city’s park system.

Bottelli said that in addition to providing access to the new park, the bridge will be important for the proposed Spokane River loop trail.

“It’s probably a long-term project, but a high priority for the city for sure,” Bottelli said.

The Central Valley School District is selling Spokane Valley 17.7 acres of undeveloped land at 44th Avenue and Bates Road in the Ponderosa neighborhood for $1.6 million.

Unlike the other two park-related properties city council agreed to buy this month, this land is slated to become a stand-alone park.

Bottelli said that the Ponderosa neighborhood has a park shortage. This land could fix that. There’s room for trails, natural areas, parking space and possibly a shelter, Bottelli said. The city hasn’t done any planning yet for the property.

Spokane County Fire District 8 has expressed interest in potentially building a new fire station on the land. City officials said if that station becomes a reality it would take up about 4 acres.

Thompson lives near the Ponderosa land. Her son grew up riding his bike there, and she said she’s glad to see it preserved.

“I think that’s just a gift to the community,” Thompson said. “I know I seem all glowy and sunshine about it, but that’s how I really feel.”