Moments like this are hard to appreciate unless you’re a rower.

On a bone-chilling October morning at Silver Lake, the tiny racing shells emerged one by one from the dark mist. 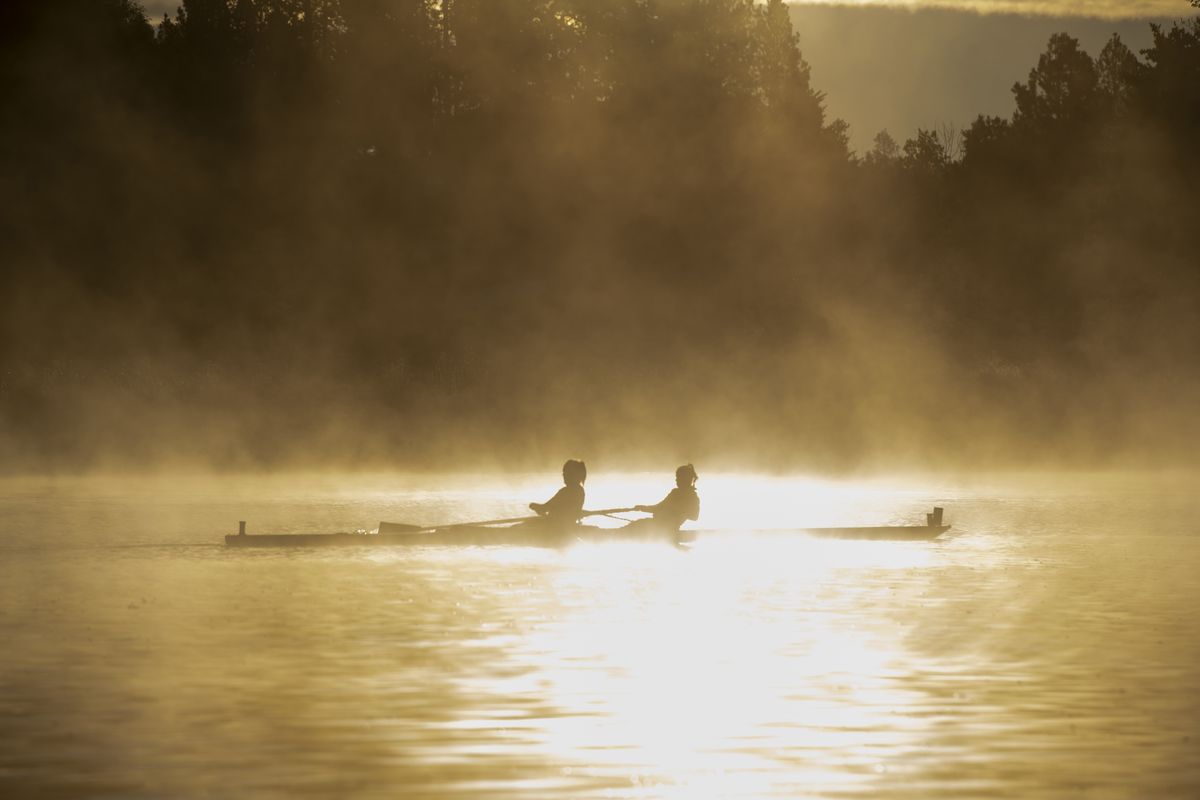 Starting well before dawn, Gonzaga rowers work out in the fog as the sun breaks over the trees Thursday, Oct. 14, 2021 on Silver Lake . (JESSE TINSLEY/THE SPOKESMAN-REVIEW)

Oars dipping and rising in harmony, the two-woman crews made barely a sound. They looked so serene, so perfect – until head coach Andrew Derrick raised his megaphone.

“You’re rolling your wrists,” Derrick called from 30 yards away. A rower corrected her technique and all was well.

Attention to detail is just one reason why Derrick has kept the Gonzaga University women’s crew team on a steady glide.

Hired as head coach in the summer of 2020, he led the Zags to their sixth straight conference title last spring and has every reason to hope for more.

Earlier this fall, the Zags’ varsity-8 boat won a regatta in Oklahoma – “we were really pleased with that,” Derrick said – then placed third at home behind Oregon State and Washington State.

The final event of the fall season is this weekend in Seattle. “That one will have a little more fanfare,” Derrick said.

With 57 young women on the roster, women’s crew can lay claim as the biggest sport at Gonzaga University.

However, the school has only enough scholarships for 10 rowers, which means the rest are very ambitious.

On this particular morning, 20 team members had been practicing since the stroke of 6, which meant they’d risen from their beds by 5 and piled into vehicles for the 20-minute drive to Silver Lake, west of Spokane.

It was pitch black and 24 degrees when they arrived; an hour later, the lights on the homes on the far side were still dark.

Because of the fog, Derrick gave half the team the morning off; otherwise it would have been unsafe with so many boats on the water. After setting up red buoys, 10 pairs of rowers hauled their two-seaters from the school’s new boathouse on the east shore of the lake and walked down the rocky path to the launch.

On the dock stood a varsity-8 coxswain with a name to match. Sailor Hawes, a junior from Southern California is bundled from head to toe, her phone in one hand and a cup of coffee in the other.

Her job on this morning was to time the boats, the best of which will join her on the varsity-8.

“I really like the team environment, the common goal,” said Hawes, who’s been doing this since middle school. “And I like being out here early in the morning, when a lot of people are sleeping.”

Out on the lake, the competition has begun. The top boats will have an inside track to making one of the eight-person boats at the next regatta.

Starting well before dawn, Gonzaga rowers work out in the fog as the sun breaks over the trees Thursday, Oct. 14, 2021 on Silver Lake . (JESSE TINSLEY/THE SPOKESMAN-REVIEW)

Up and down the lake they went. Rowers pull with their arms, but the real strain is in the legs – and the wrist, if you don’t heed the coach’s advice.

In addition to pointing out their flaws, Derrick’s job is to keep his rowers safe. Even with their backs to the front of the boat, experienced rowers can stay on course by picking out a landmark on the shore.

“That’s hard in the fog,” Derrick said. Actually it seemed impossible in the darkness, but he had help; somewhere out there, Derrick’s assistants are doing the same thing.

As the rowers regrouped for another run, Derrick appreciated the moment. A rower at the University of Washington, he led successful programs at Central Oklahoma and Seattle Pacific before getting the head job at Gonzaga in 2020.

“I really wanted to get back to Division 1, and it was a great program already, so I jumped at the chance.” Derrick said.

“We’ve held out own, we have lofty ambitions, we want multiple boats in the NCAAs,” said Derrick, who also credited Chris Bailey-Green, Olivia Betz and Gillian Edgar for the success last spring in the WCCs.

That was a reward for all the tumult of the previous year. The COVID-19 pandemic wiped out both the fall and spring seasons in 2020 and also affected winter training.

Because Silver Lake freezes in winter, conditioning happens on campus with ergometers. But because of social distancing requirements, only one on-campus site was suitable for winter training: the McCarthey Athletic Center.

“We like to joke that we were the team that spent the most time in the Kennel without actually attending a basketball game,” Derrick said.

The payoff came at the WCCs, where Grace Dojan was on the varsity-8 boat that later finished 19th in the NCAAs.

“It was so exhilarating,” said Dojan, a junior from Vancouver, Wash. “Coming out of COVID, there were a lot of unknowns, but when it was over, it was like, ‘yeah, we did that; we worked harder during the competition than our competitors.”

Toward the end of practice, the sun began to peek through the trees and the mist began to thin.

Derrick ordered the rowers into cooldowns – an odd choice of words, considering it was still below freezing and the frost still clung to the dock.

Practice ended promptly at 8, because these women are students first. Shaking out their legs, they grabbed shells and oars and headed up the gravel path to the sanctuary known as the GU Boathouse.

Rowing at Gonzaga began as a club sport in 1984 with a few athletes, a Jesuit priest and two wooden boats on nearby Lake Arthur.

Six years later, the Zags moved up to Division I but had to make do with a boathouse on the Spokane River. It lacked heating insulation and running water, but held enough dreams to help the women get the better of their warm-weather competitors in the West Coast Conference.

Today, the men’s and women’s rowing teams have a combined total of 90 athletes. In 2019, they got a facility to match. After more than two years of fundraising, planning, and building, the Johnson Family Boathouse opened on Silver Lake.

It’s equipped with a dedicated boat dock, locker rooms for the athletes and private ones for the coaches.

As Derrick gathered the team for a post-practice meeting, you got the sense they wouldn’t want to be anywhere else.

“It’s hard work, but my teammates make it so worth it,” said Hannah Cooney, a sophomore from Portland and last year’s WCC Newcomer of the Year.

“A sport like this doesn’t get a lot of attention, but I don’t come here for that,” Cooney said. “I come here for my teammates and for what we’re building here.”

“Seeing the sunrise in the morning, you and your teammates working hard – it’s the best feeling ever,: Dojan said. “Now I’m ready to start the day.”