When two team that want to be known for defense square off, it becomes a battle of wills. When it happens for a league championship, it becomes something of a brawl.

And so it was Friday night.

Gonzaga Prep and visiting Mt. Spokane entered knowing that each had secured the top seeds from the Greater Spokane League, 4A and 3A respectively. They also knew if one-loss Mt. Spokane beat the undefeated Bullpups, the Wildcats would be crowned league champion for the season.

The two teams spent much of the first half daring each other to pound it up the middle against each other. But a couple of big plays, and a huge defensive stand, changed the complexion of the game.

Ryan McKenna rushed for 164 yards on 31 carries with three touchdowns, and threw a 24-yard TD pass that ended up the difference-maker, and the Bullpups outlasted the Wildcats 28-20 to stay undefeated and secure the 2021 GSL title.

“Both great teams, and I’m happy we came out with the win,” McKenna said. “I can’t say enough about how great our o-line blocked and how unbelievable the defense played.”

“That was a great game, most exciting game we played so far,” G-Prep defensive end Kaz Melzer said. “I love getting out there with the guys and showing what we can do.”

“They have a great D-line,” Flanigan said. “I knew we were going to be in a battle, we just came up a little short at the end. It’s hard.”

Gonzaga Prep (9-0, 8-0) led 14-10 at intermission and Mt. Spokane forced the Pups to punt on their first possession of the second half.

“We were trying to pound it and they were stuffing us so we had to start airing it out in the second half,” Flanigan said.

But three runs, including a scramble by Flanigan, didn’t get it in the end zone. Texas A&M-bound kicker Ethan Moczulski popped one from 22 yards and the Cats trailed 14-13 with just over 3 minutes left in the quarter.

“That was a huge statement for what we what we’re gonna do in the playoffs,” Melzer said. “Battling back from adversity and just making big plays.”

Settling for three took a little wind out of the Wildcats’ sails.

“It definitely did,” Flanigan said. “We wanted to punch that in but we trusted our defense and we put our field goal (team) out there. We came up short in the end.”

“You know, it hurt, but we’re still only down a touchdown and two-point conversion,” Mt. Spokane coach Terry Cloer said. “So we felt like you know, ‘Kick the field goal.’ We were okay.”

The Bullpups took over at their 20 and cranked out three and four yards at a time, satisfied to keep the clock running. All told, a 19-play drive took 10:27 off the clock and resulted in McKenna’s third touchdown run of the night, a 2-yard carry, which made it 21-13 with 4:50 left.

“You knew it was gonna come down to the fourth quarter,” Cloer said. “They put together a nice drive there and, you know, kind of leaned on us. Death by 1,000 paper cuts.”

Mt. Spokane threw three incomplete passes and Moczulski dropped the punt snap. He recovered at the Cats 24, giving the Pups great field position. On fourth-and-10, McKenna threw just his second pass of the game to a wide open Dylan O’Keefe on the left sideline for a 24-yard TD to make it a two-score game.

A roughing the passer penalty helped get the Wildcats into the red zone and Flanigan connected with Speer on a 16-yard touchdown pass, but the ensuing onside kick attempt went out of bounds and G-Prep assumed the victory formation.

Moczulski’s second short punt of the first quarter set G-Prep up at the Wildcats 48. The Pups ground out an 11-play drive culminated in a 3-yard touchdown run for McKenna and  7-0 lead just before the end of the quarter.

On the next series, Flanigan rolled left looking for Jordan Sands, but his pass along the sideline was short and picked off by Junus McGraw. Three plays later, McKenna busted one up the middle, shed a tackle at the second level and outran Aiden Prado to the sideline for a 65-yard touchdown run.

On the ensuing kick, Prado took it back 93 yards to the G-Prep 1. On third-and-goal Flanigan hit Blake Speer on an out route at the pylon and the Wildcats drew within a score.

The Wildcats recovered an onside kick and went back to work at the G-Prep 42. But the Cats couldn’t take advantage and had to kick it back.

G-Prep moved it methodically back into Mt. Spokane territory, but McKenna was stuffed on a fourth-and-3 run and the Pups gave it back with less than 2 minutes in the half. 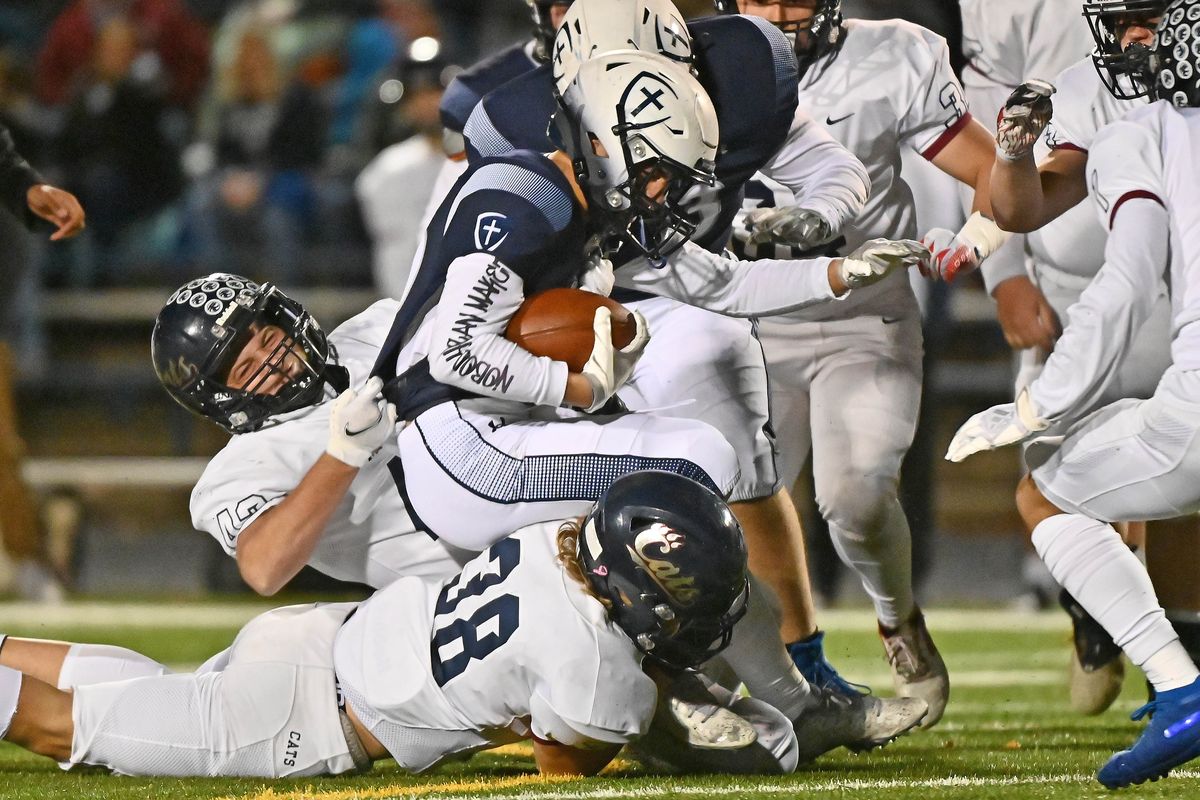 Flanigan hit Speer for 19 yards to get into field goal range, and the Texas A&M-bound Moczulski nailed a 44-yarder to make it 14-10 at intermission.