There was nothing trivial about the contest waged Thursday morning at KSPS Studios.

The subject matter was serious and so were the contestants, students from The Community School and North Central High School.

They matched wits and witticisms, impressed the judges and even challenged them at times.

The occasion was the Civics Bowl, a new collaboration between the League of Women Voters and Spokane Public Schools. 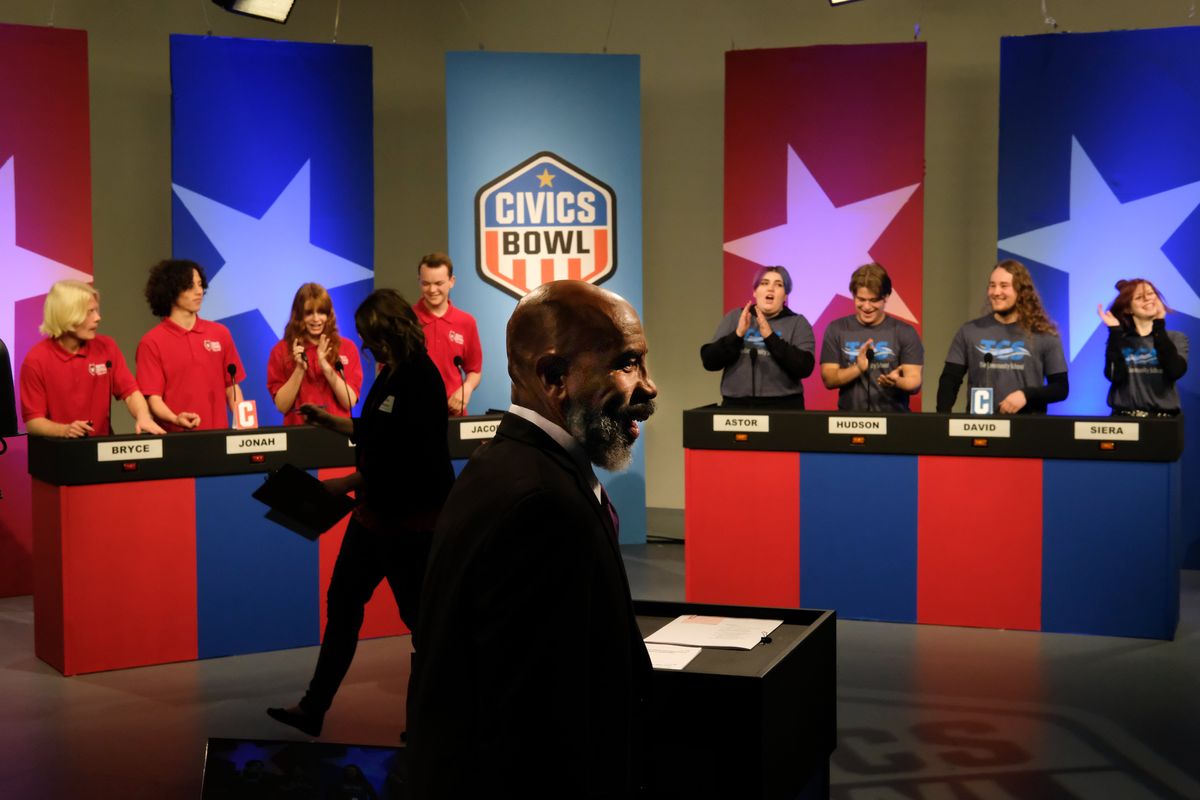 Show host Gary Stokes, General Manager of KSPS, center, smiles as Civics Bowl teams from North Central, left, and The Community School, right, get ready to test their knowledge against each other during a taping of the Civics Bowl by KSPS and the League of Women voters on Thursday, Apr 28, 2022, at KSPS in Spokane, Wash. (Tyler Tjomsland/The Spokesman-Review)

The goal was to raise awareness about the importance of civics in education, and to have some fun. Both goals were realized after six matches that covered two days of taping at the KSPS PBS facility on South Regal.

Also participating were teams from Ferris, Lewis & Clark, Rogers and Shadle Park. The shows will air for six straight weeks, beginning Monday and ending June 6 with the crowning of a Civics Bowl champion.

The show is modeled loosely on the “High School Bowl” programs that aired half a century ago and included dozens of schools from Eastern Washington.

Each contest will run for 30 minutes on KSPS PBS and be streamed online. The teams answered questions about national, state, tribal and regional governments, and other topics related to high school-level study of civics and government.

“This is the fruition of something that started long ago … and the kids get so engaged in civics, and that’s what we sorely need in our country right now,” said Ann Murphy, president of the League of Women Voters of the Spokane Area and one of two judges for the event.

The other judge, Susie Gerard, said she was “truly excited for the opportunity for all these kids to participate in something that’s meaningful and have a little friendly competition.”

“Our goal is to educate them so that they can make their own decisions and become engaged citizens,” said Gerard, the coordinator of secondary social studies for Spokane Public Schools.

Added Gerard: “It’s so important, because kids need to find out how the government works and how they can have a voice.”

Based on what happened in the studio on Thursday, most of them already do.

Early in the contest, emcee and KSPS President Gary Stokes asked for a definition of “double jeopardy” in criminal trials.

Barely a second later, Community School junior Siera Watkins hit the buzzer and answered so precisely that she must have been preparing from a textbook.

That’s because she had, thanks to some proctoring from Coach Chelsea Duvall.

“It always surprises me how much our students know,” said Duvall, who watched the action from the back of the studio with social studies teacher David Egly.

On a few occasions, the students knew enough to challenge the judges’ decision on whether an answer was correct.

The crew at KSPS faced the steepest learning curve. Staff had to assemble the graphics, design the set and a multitude of other chores.

Leilah Isaacson, the coordinating producer, was tasked with refining the rules and coordinating with the League of Women Voters to assemble hundreds of questions on a relatively narrow range of subjects.

“We wanted this to be just on the subject of civics, because it’s really important, and we want our community to be involved and dedicated to civics,” Isaacson said.

“We really had to work from scratch, but we really appreciate the help of the League,” Isaacson said.

The event was sponsored by Avista Foundation, which provided a grant covering about 25% of the costs to KSPS PBS.