Fire destroyed a motel on the edge of downtown Cheney early Tuesday.

The blaze, which started around 12:30 a.m. at the Motel Cheney, still was smoldering about 9 a.m. Tuesday as fire crews continued to work the scene, 1502 First St. The roof collapsed and smoke continued to pour from the building.

Cheney City Administrator Mark Schuller said the Cheney Fire Department was the first to arrive on the scene and evacuated the complex. The fire grew fast, he said.

No injuries were reported. All of the evacuees were being relocated with the help of the Red Cross, Cheney Fire Department Battalion Tim Steiner said. 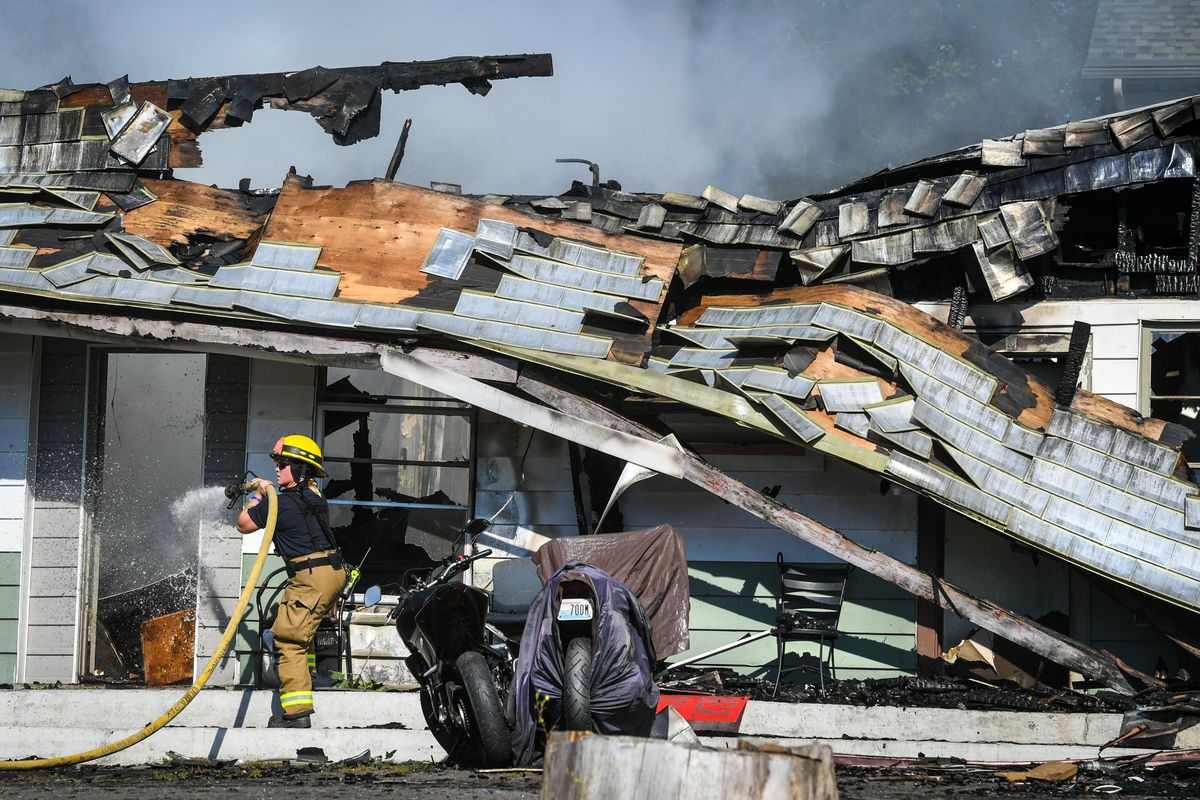 Spokane Fire District 3 firefighter Tori Wright hits a hot spot inside one of the 11 Motel in Cheney units that burned in an early morning blaze, Tuesday, Aug. 23, 2022 in Cheney. (Dan Pelle/The Spokesman-Review)

Steiner said the cause of the fire is still under investigation, but it is believed to have originated in a single unit and to have spread rapidly throughout the building due to its age.

“The fire was still pretty intense for three or four hours,” Schuller said. “I think about 4 or 4:30 a.m. they had made some pretty good progress. That fire was still roaring for a long time.”

Spokane Fire District 3 firefighter Tori Wright hits a hot spot inside one of the 11 Motel in Cheney units that burned in an early morning blaze, Tuesday, Aug. 23, 2022 in Cheney. (Dan Pelle/The Spokesman-Review)

First Street between Pine and and Mary streets will be closed throughout Tuesday as fire crews continued to work the scene. A demolition team was expected to help the firefighters extinguish the last bit of the fire, Steiner said.

The motel, which contained 11 units, previously was used for nightly rentals but was more recently used for monthly rentals, Steiner said.

The L-shaped, one-story motel was built in 1941 and earlier was called the Pinehurst Motel, according to Spokane County records. It was purchased by Spokane residents Andy and Cheryl Louie in 2019 and remodeled in 2020.

Vanessa Vallee, a former resident of the motel who currently lives next door, complained that the building was really showing its age while she was living there. She woke up to the fire as fire crews began to arrive.

A small lot filled with bushes separates her building from the motel.

“We thought we were going to be evacuated if it caught the bushes on fire,” she said.

Large pine trees, power lines and a wooden fence separated the motel from a home and a duplex directly behind it on Second Street.

Priscilla Suarez, who lives in the duplex, said she woke to the sound of people screaming coming through her open window in the middle of the night. Although she has only lived in Cheney for a couple months, she said there were frequent disturbances at the motel.

When she looked outside, the flames were over the fence and had caught one of the pine trees on fire. Suarez was thankful fire crews were able to extinguish the fire in the trees quickly, she said.

“If those were to catch fire, I know our apartments were going to go,” she said.

Shortly after, the Cheney Police Department told them to evacuate the house, she said. She considered staying but she heard a loud explosion from the motel, which prompted her to go to a relative’s house down the street.

“It was a pure adrenaline rush,” she said.

Schuller said the city hasn’t experienced a total building loss such as this in recent memory.