Hundreds of people gathered to protest the Supreme Court opinion restricting abortions by overturning Roe v. Wade Friday, chanting “not the church, not the state, people must decide their fate” in downtown Spokane.

Deborah Hale, 71, grabbed a sign from organizers with Planned Parenthood of Greater Washington and North Idaho.

As people began to gather, Hale thought back to 1969, when she was a student at Washington State University and headed to the doctor to ask for birth control.

When Hale said no, the doctor refused to give the 18-year-old any contraceptives, and not long after, she was pregnant.

Abortion was illegal at the time, so her mother drove her to Portland, where they found a doctor who would do the procedure, Hale said.

“I don’t think anyone should have to go through that again,” Hale said.

The “We won’t go back, We won’t go down: Bans off our Bodies” protest at the Thomas S. Foley United States Courthouse was organized by a slew of Spokane groups, including Planned Parenthood, Peace and Justice Action League of Spokane and Spokane Community Against Racism.

More than 250 people attended, carrying signs with a variety of messages, including, “Abort the Supreme Court,” “I am a woman not a womb” and “You can only ban safe abortions.” 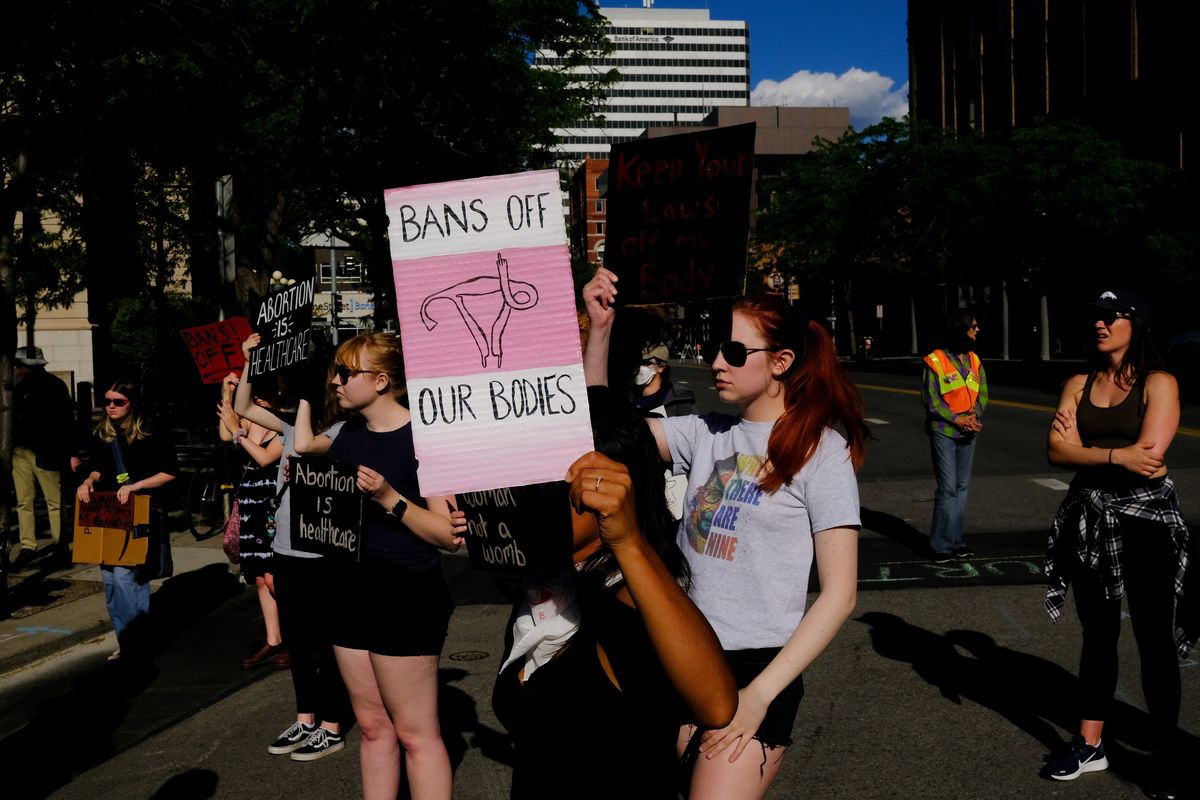 Isabella Senteno, center, of Spokane, holds a “Bans Off Our Bodies” sign during a protest against the Supreme Court’s decision to overturn Roe v. Wade on Friday, Jun 24, 2022, in Spokane, Wash. (Tyler Tjomsland/The Spokesman-Review)

When she heard the news that Roe had been overturned, Hannah Kimball-Fuller said she felt “gross.”

She went and hugged her kids tightly, she said.

A retired nurse, Lin McGinn, 74, said she spent years treating women who were addicted to drugs and had numerous children without knowing when or how they got pregnant.

She also treated young girls who were pregnant from incestual assault. Those experiences, in her mind, solidified the need for women to have the right to choose, McGinn said.

Preventing women from having abortions furthers the harm and trauma they feel when experiencing violence, McGinn said.

“I really believe women ought be able to make the choice,” McGinn said.

After a handful of speeches, protesters walked through downtown , which was bustling with people preparing for Hoopfest this weekend.

One woman having dinner at a nearby restaurant pumped her fist and cheered as protesters passed. Workers at booths handing out gear for the 3-on-3 basketball tournament got up and clapped.

The decision Friday morning to overturn Roe was the push she finally needed to go out and protest for women’s reproductive rights, despite being passionate about the issue for years, she said.

As the march returned to the courthouse, Kathy Lund stood on a street corner in the red cape and white bonnet made iconic by Margaret Atwood’s dystopian novel “A Handmaid’s Tale.”

In the book that’s been adapted into an award-winning television series, women are raped then forced to bear children for a ruling group of men.

Lund wore the costume as a symbol of the direction she feels “religious extremists” are pushing in the United States.

People in favor of overturning Roe are trying to “whittle away our rights piece by piece,” Lund said. They’ll go for contraception next, she added.

“The writing is on the wall,” she said.