With their own March Madness workout, a few Spokane retirees have found a way to get in some hoops action while cheering on the Zags.

The residents in a class at Touchmark on South Hill are aiming to score big in both strength and balance. In this month’s basketball fitness skills camp, they’re learning about footwork, passes, dribbling and shooting skills each Wednesday.

“It’s a great workout physically and also mentally,” said Charlotte Bouley, 75. “I love Gonzaga. I have some buddies here, and we all watch the games together.”

Bouley saw information about the Touchmark class and thought it sounded like fun. She also has a fitness coach at the facility for personal workouts. After the third basketball skills session, she laughed about being game ready for the Zags.

“I’m ready to sit in the chair and watch.” 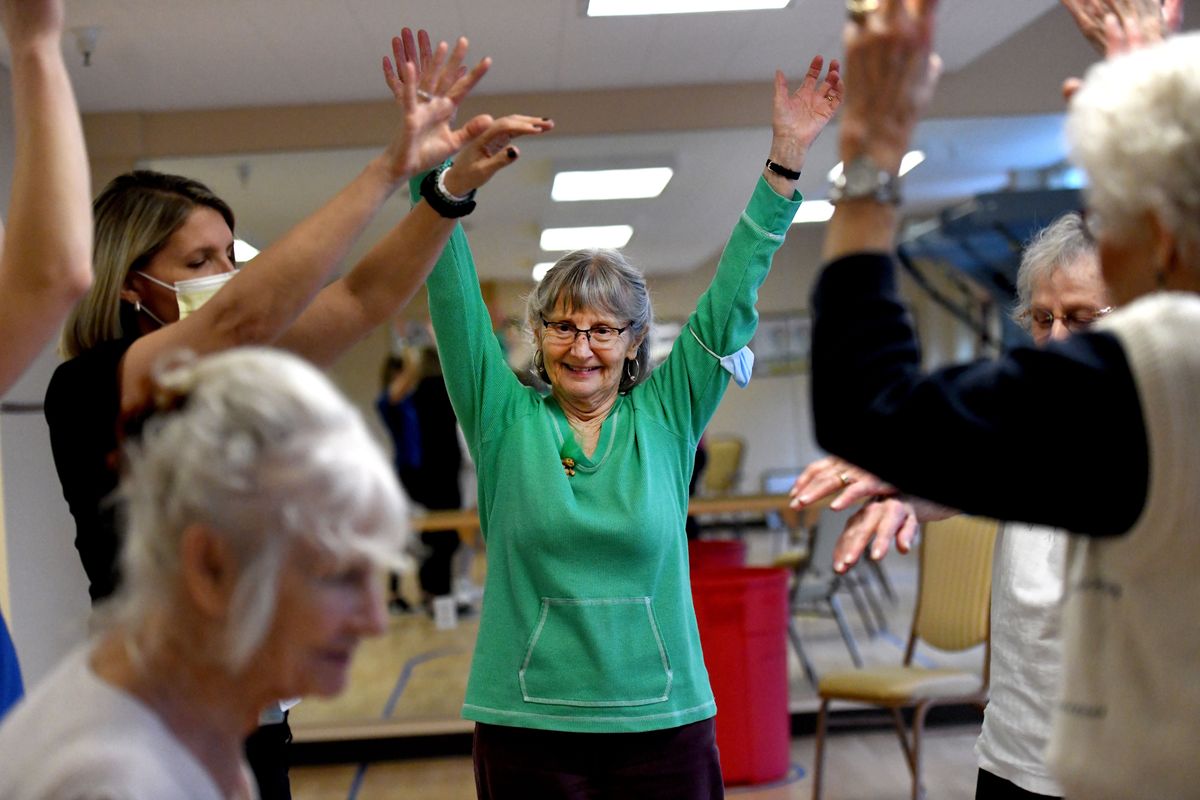 “I kind of played in high school, well in P.E.,” she said. “This class is really an extension of the bigger picture. I come every day for balance and stability, and I want that kind of help every day to try to avoid the falls.

At the same time, it’s clear that many Touchmark residents are rooting for the Gonzaga Bulldogs in the NCAA Basketball Tournament, with plentiful Zags posters adorning the walls.

Certified fitness professionals Alexis Crellin and Dawn Olson are leading the retirees in the class, which had five women participating this past week. However, as many as eight have come. Crellin and Olson used tape to transform Touchmark’s health and fitness studio into a makeshift basketball court.

As any basketball team would do, members started with a warmup and conditioning. During a skills drill, they walked to the first line, and back, then repeated for each line to the end of the court. Crellin then led in side-to-side footwork across the length of the court along with other skills for balance by pivoting a foot to the front or back.

The group also practiced throws while changing positions so that one person at the end could slam-dunk the ball into a makeshift basket, a large trash can.

“Many residents are alumni of Gonzaga University or simply love the Bulldogs and are pumped about March Madness every year,” Olson said. “We drew from their excitement when planning this class series and are inspired by their enthusiasm for honing some court skills of their own.”

Jackie Martin, 86, said she appreciates the class for improved balance after she broke a leg last year falling on a patch of ice. She also is having fun rooting for Gonzaga, which is simply a given at Touchmark, she added.

“If you’re not, they won’t let you into the dining room,” Martin joked. “Yes, definitely rooting for the Zags. This is fun; Dawn always cooks up something wonderful for us.”

For the last class, they’ll put their new skills to the test for fun and competition in a final scrimmage.