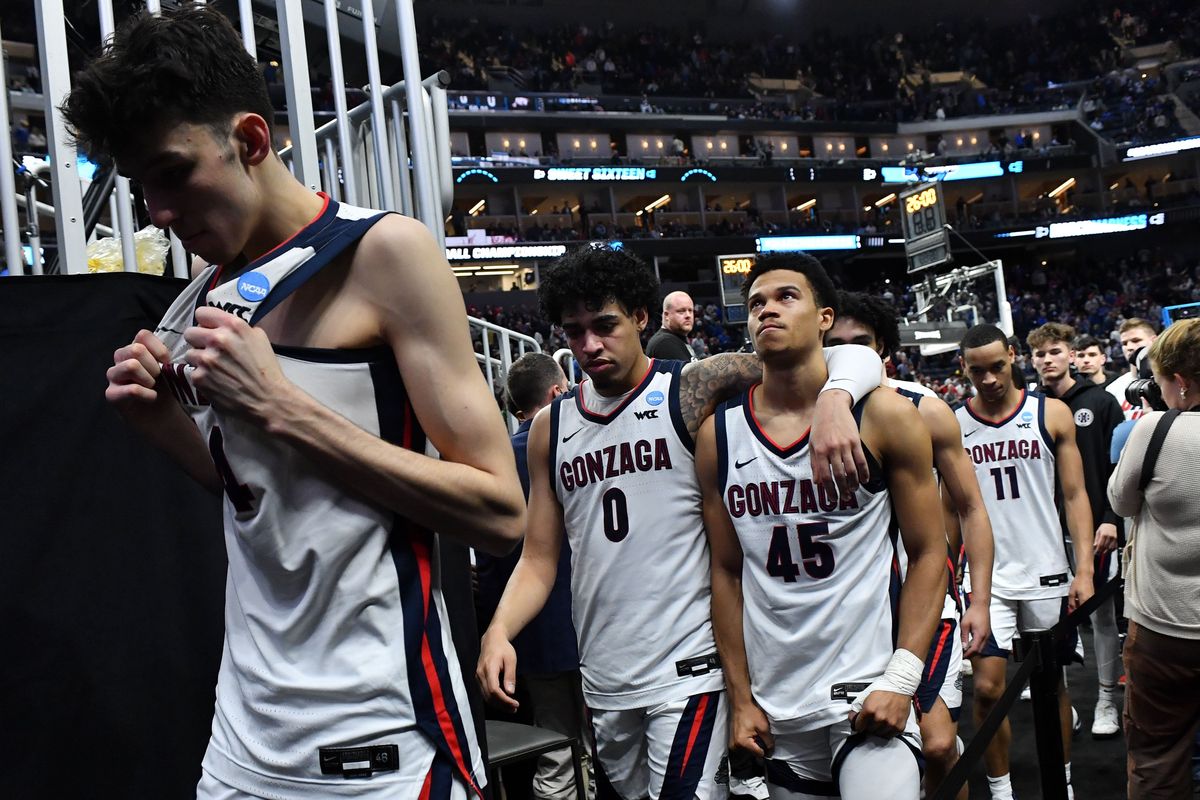 Gonzaga Bulldogs center Chet Holmgren (34), guard Julian Strawther (0) and guard Rasir Bolton (45) head to the locker room after falling to the Arkansas Razorbacks during the second half of a Sweet 16 game on Thursday Mar 24, 2022, at Chase Center in San Francisco, Calif. The Arkansas Razorbacks won the game 74-68. (Tyler Tjomsland/The Spokesman-Review)

Gonzaga’s run back to the NCAA Tournament title game was cut short in the Sweet 16.

Arkansas stunned the Bulldogs with a 74-68 win in San Francisco on Thursday, knocking off the top-seeded team and returning to the Elite 8 for the second-straight year.

The Razorbacks (18-7) bogged the game down, forcing 15 turnovers and fouling out Chet Holmgren after playing 23 minutes. They were led by 21 points from JD Notae and 15 from Jaylin Williams, who also grabbed 12 rebounds.

The loss will likely be the last game for Holmgren, who is expected to be a top pick in the NBA draft. Nembhard, who shot just 2 of 11 from the field after an excellent performance against Memphis, will also leave as a senior.

Arkansas advances to play the winner of Texas Tech and Duke in the Elite 8.

SAN FRANCISCO – It was starting to look familiar. Gonzaga, up against a halftime deficit, force-feeding Drew Timme with hopes the junior forward could establish himself the same way he did in the second half of the Bulldogs’ previous NCAA Tournament games against Memphis and Georgia State. | Read more »

This was a kind of Greco-Roman basketball, with rugby scrums in the lane, full nelsons and submission holds in the backcourt. And in the end, we were left to watch the sad faces of large young men realizing that the competitive endeavor they’d devoted the previous six months of their lives to had come to a sudden end. | Read more »

‘I couldn’t be any more proud of these guys’: Drew Timme delivers heartfelt speech to teammates after loss to Arkansas

For a solid 30 seconds, Timme’s fervent emotions poured out of his lips, his expressive eyes darting to every teammate as the rest of the Zags were locked on him in the center. | Read more »

For the sixth time in the last seven games, Gonzaga’s Andrew Nembhard never left the court. The senior point guard was outstanding in nearly every one of those games, but he exited the floor Thursday with his head and eyes down after a 74-68 upset loss to Arkansas in the Sweet 16. Nembhard, who has choreographed one of the nation’s top offenses, was held in check for one of the rare times this season. | Read more »

TV Take: Arkansas mucks it up to pull away from cold-shooting Zags and hold lead through most of second half

If you woke up Thursday with non-buyer’s remorse, because you didn’t book a San Francisco trip for Gonzaga’s West region game with Arkansas, you probably shed it halfway through Thursday’s second half. | Read more »

Notae gets a couple of layups to fall to lead the Razorbacks with four points, while Timme leads the Zags with four. Holmgren and Rolton with a foul apiece at the U16 media timeout.

This fake by Andrew Nembhard 👀 pic.twitter.com/Zkv1O7F4dJ

Holmgren takes a seat with two fouls at the U8 media timeout. Umude stays on the court with two for Arkansas.

Strawther in the first half today: 8 points 📈@ZagMBB is getting everything they can out of @JulianStrawther today!

Neither team shooting well on 3-pointers, Arkansas is 2 of 10, while the Zags are 3 of 12. Zero free throws for the Razorbacks, who enter the game top 10 in the country for made free throws per game.

Notae is also struggling, just 3 of 11 from the field. He leads Arkansas with six points.

Bolton and Strawther lead Gonzaga with eight points apiece. Holmgren has not returned since picking up his second foul.

0:32 - UA 30, GU 29: Arkansas takes its first lead of the game and Few calls for a timeout to try and retake the lead before halftime.

Jaylin Williams with the dunk!

Jaylin Williams draws a charge, JD Notae flies down the court for a layup at the buzzer and Arkansas takes a 13-2 run into halftime for a 32-29 lead over Gonzaga.

The Zags have now trailed at halftime in back-to-back NCAA Tournament games for the first time since 2009. The Bulldogs will have a lot to improve on, having missed a lot of open looks at just 12 of 34 from the field and 3 of 13 on 3-pointers.

Gonzaga’s Andrew Nembhard was just 1 of 8 from the field, while Holmgren played eight minutes with two fouls.

Bolton, Strawther and Timme lead the Zags with eight points apiece. If Gonzaga comes out in the second half like they did against Memphis, they won’t have a problem retaking and keeping the lead.

Notae up to 14 points for Arkansas. Timme has a team-high 10.

11:33 - UA 45, GU 42: Holmgren starting to take over while playing with three fouls, up to nine points and nine rebounds at the U12 media timeout.

Both teams shooting 37% from the field and 23% on 3-pointers with not much separating them.

Zags with 11 turnovers to Arkansas’ six.

ZAGS AND RAZORBACKS ARE BATTLING 🔥

Umude with four fouls for Arkansas.

.@ChetHolmgren ties the program record for blocks in a single season pic.twitter.com/kPdBw8NElz

Unc showin out for @DwyaneWade
pic.twitter.com/OClqMz2UBk

3:48 - UA 62, GU 56: Zags aren’t going away, but Arkansas clings to a six point lead at the U4 media timeout. Fouls coming to the forefront, as Williams, Umude and Holmgren each have four.

Notae up to 20 points on 9 of 27 shooting, continuing to hoist up shots. Timme leads the Zags with 21.

Arkansas up 8 over Gonzaga 👀

With the guards shooting poorly, Timme is going to need to take over the final two minutes to get the Zags back in this one.

Gonzaga and Arkansas tip off the Sweet 16 today at 4:09 p.m. on CBS, as the Zags chase their elusive first NCAA Tournament Championship.

The Bulldogs (28-3) look to advance to the Elite 8 for the 5th time in the past seven seasons, while the underdog Razorbacks (27-8) look for their second-straight under head coach Eric Musselman, after not making an appearance in the second weekend of the tournament since 1996.

Gonzaga is a 10-point favorite according to Vegasinsider consensus, beating (16) Georgia State and (9) Memphis in the first two rounds in Portland. The Zags overcame a 10-point halftime deficit led by remarkable performances from Drew Timme and Andrew Nembhard to edge the Tigers 82-78.

Arkansas made a long trip to Buffalo, New York, for its opening two games defeating a tough (13) Vermont team in the opening round 75-71, before outlasting (12) New Mexico State in a defensive struggle 53-48.

Arkansas lost 5 of 6 in a stretch from Dec. 11 to Jan. 8, but caught fire in conference play, picking up notable wins over Kentucky, Tennessee and Auburn.

The winner will move on to play either (3) Texas Tech or (2) Duke on Saturday, who tip off after Zags-Arkansas in the Chase Center.

“No soft guys” warm up for today’s Sweet 16 matchup with #Arkansas. pic.twitter.com/gQOz9SBCVh

“I don’t want you getting on this plane tomorrow if you don’t think in your every fiber in your body that we’re going to win this game.” - Eric Musselman

Take a look inside as @RazorbackMBB prepares to take on Gonzaga tonight. pic.twitter.com/iqJKFSDT5f

Kevin Pangos was on fire with a team-high 34 points, while Bobby Portis – who won the NBA Championship with the Milwaukee Bucks last season – led the Razorbacks with 18.

SAN FRANCISCO – A few months into the 2021-22 college basketball season, pundits and analysts could have made a fairly strong case as to why three of the four teams at this week’s West Regional in San Francisco would still be competing for a national championship in the third week of March. | Read more »

SAN FRANCISCO – As frequent purveyors of the transfer guard market , the Gonzaga Bulldogs have at least one thing in common with their next opponent at the NCAA Tournament. | Read more »

SAN FRANCISCO – Picture Mark Few, tucking into bed, and like any coach this time of year, his mind is awash with anxiety. So much can go wrong on the basketball floor; how can a coach get any sleep at all? | Read more »

With West basketball surging – led by No. 1 seed Gonzaga – is the end of the NCAA title drought in sight?

The West nearly ended the title dry spell at 20 years when Gonzaga defeated South Carolina in one national semifinal, but Oregon fell to North Carolina 77-76, preventing a West vs. West title game. Gonzaga led with less than 2 minutes remaining but the Tar Heels won the championship by scoring the last eight points. Few figures the questions will be resurface with the Zags, the tournament’s top overall seed, set to face fourth-seeded Arkansas in the Sweet 16 Thursday at Chase Center. | Read more »

As Gonzaga and Arkansas prepare for the Sweet 16, another battle rages on between Bulldogs, Razorbacks

As top-seeded Gonzaga and fourth-seeded Arkansas prepare to compete against each other Thursday in the NCAA Tournament with their seasons on the line, another important battle persists between Mark Few’s Bulldogs and Eric Musselman’s Razorbacks. | Read more »

SAN FRANCISCO – Since beginning his coaching career in 1989, Eric Musselman has been all over the map. | Read more »