Turtles in the region

The pond turtle, found on the West Side, is state-listed as endangered in Washington.

Painted turtle populations are considered generally healthy, but the species is protected. Injuring or taking them from the field is prohibited.

The Western painted turtle is the only turtle species that occurs naturally in Idaho.

Non-native turtles such as the red-eared slider – which can enter the environment when people who buy them at pet shops later "set them free" – compete with native turtles for habitat and can spread diseases.

The Western painted turtle – found in Inland Northwest ponds, lakes and slow-moving waters that have soft, muddy bottoms – has a way of being inconspicuously obvious.

The top of its shell, called the carapace, is a dark camouflage of greens, grays and browns. By contrast, what amounts to a skid plate on the bottom of the turtle, called the plastron, features a brilliant artsy pattern of yellow, orange, red and black.

The reptile often gets little more than a passing glance by outdoors enthusiasts paddling the Little Spokane River, fishing Silver Lake, or hiking the path along the pond at Mirabeau Point Park, to name just a few local turtle habitats.

“Turtles are cool because they are so unique,” said Lisa Hallock, Washington Department of Fish and Wildlife herpetologist, who’s devoted her career to the study and conservation of reptiles and amphibians.

The amazingly adaptable painted turtle (in several subspecies) is the most widespread native turtle of North America. It ranges in freshwaters from southern Canada to northern Mexico, and from the Atlantic to the Pacific, yet most people know little about it. 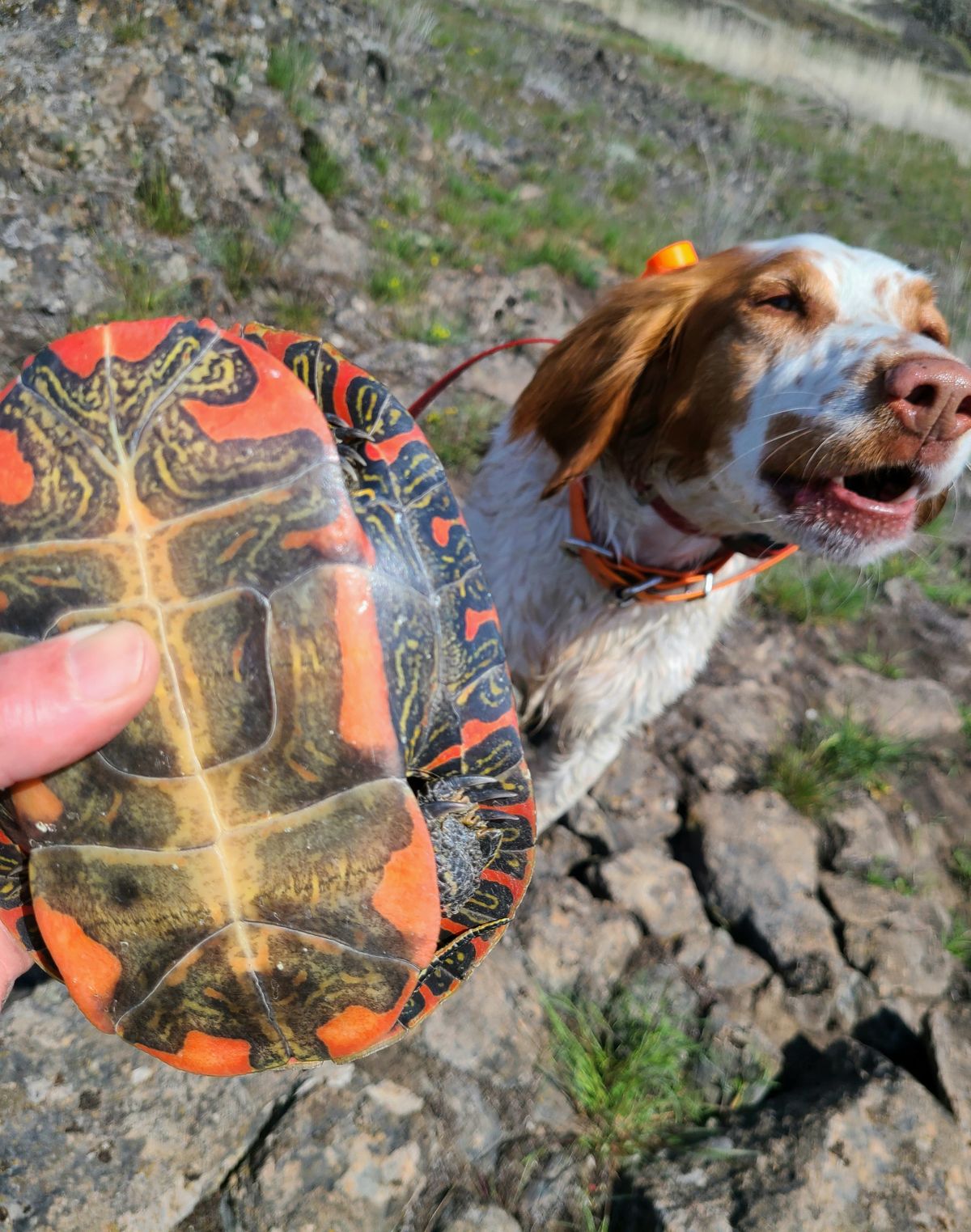 The bottom of a painted turtle’s shell is a colorful work of art. This turtle pulled its head, legs and tail into its shell when pointed out by Rich Landers’ dog, Ranger. (RICH LANDERS/FOR THE SPOKESMAN-REVIEW)

While bicycling one spring day, I came upon a turtle in the middle of Hangman Road, dangerous territory for any critter with webbed feet. I parked my bike, checked for traffic, and gave the turtle a 30-foot lift across the pavement in the direction it was heading so it could continue the journey with less chance of being roadkill.

For the rest of my bike ride, I pondered life in a shell.

The turtle leaves a lot to our imaginations when it appears in open water to check out surroundings with only an inch or two of nose visible above the surface. There’s more, of course. The average adult male painted turtle is about 6 to 8 inches long, with females being larger than males – up to about 10 inches.

As turtles grow, the “skin” that sheds off their shell resembles a burnt leaf.

A painted turtle female reaches sexual maturity in six to seven years and can live to age 20 or more if all goes well. Not bad for a wild creature. Longevity is a benefit of its protective armor as well as its laid-back lifestyle.

Being an ecotherm, a turtle exposes itself regularly when it hauls out of the water to bask motionless for long periods in the sun. The outside source of heat is necessary to warm its cold-blooded system. As a side benefit, solar rays control hitchhiking algae or leeches.

Turtles spend some time alone, but like a pride of lions or a murder of crows, a bale of turtles benefits from numerous eyes to detect danger. They frequently congregate on a rock or log where they can instantly dive and swim underwater for safety.

“There are times in Eastern Washington where I’ve realized there were more than a dozen painted turtles watching me from the water,” Hallock said.

An adult turtle can hang out underwater in warm temperatures for an entire day. It can lie still under ice at the bottom of a cold lake for several days. Or it can disappear deep in the mud of a frozen pond for the entire winter.

But as carefree as life is eating plants, small fish, crustaceans, algae, aquatic insects and carrion around the security of water, some turtles get the itch to travel during spring. The drive to go truckin’ over land seems almost humorous for such a speed-challenged critter.

Why did the turtle cross the road? To find a shell station, jokesters say.

But according to experts, turtles commonly traverse roads or trek significant distances on land in search of mates. And after mating, females travel over land to find nesting sites sometimes more than 200 yards from the relative safety of water. It’s not uncommon for them to breed on one side of a road and lay their eggs on the other side.

They’ll scratch out a nest in sun-drenched soil with their hind legs and lay four to 15 soft-shelled eggs. The not-to-dote moms then leave the nest.

Hatchling painted turtles are perfect miniatures of adults. About the size of a quarter, they usually break out of their eggs in fall, stay underground in the nest for the winter and emerge in spring. They’re on their own, left with nothing but instincts to find their way back to water and survive.

Only a small percentage of hatchlings evades being picked off by predators such as raccoons, minks, skunks, otters, snakes, raptors and non-native bullfrogs and largemouth bass.

Although an adult turtle can retract its head and legs into the protection of the shell, it’s still vulnerable to persistent predators – and, of course, to motor vehicles.

My interest in turtles was piqued again on a sunny day in late April while hiking and exploring at the Swanson Lakes Wildlife Area in Lincoln County. From the shore and especially when peering down from a rock cliff that dropped to the water, I counted more than a dozen obvious painted turtles where you’d expect to see them in the lake or along the rocky shore.

Thanks to my dog discovering a new use for his sophisticated nose, I also was alerted to the turtle’s obscure movements.

Ranger ranged away from the water and seemed to be scenting something noteworthy. Soon he went on point. Instead of holding staunch and quiet, as the Brittany would when detecting game birds, he stood and barked as if beckoning me to come see.

He was standing near a Western painted turtle that had roamed about 80 yards up from the water into a world of sand, bunchgrass, basalt and wildfire-ravaged sage.

Ranger later found two more roaming turtles as we circumnavigated the lake. One was in thick, winter-matted dry grass. The other was in the open, negotiating rough, rocky terrain that was tricky for a human to walk on, much less a rigid critter with an inch of clearance.

“Nights (were) still cold and it seems that was early for nesting,” Hallock said after looking at my photos. She noted the long foreclaws indicated the overland turtles likely were males.

While some turtles could have been nesting in warmer niches in late April, it’s more likely the males we found were out-and-about in search of mates.

Ranger also found a recently deceased turtle, belly up at the edge of cattails. Turtles can make mistakes that cause them to roll over when traveling and climbing or while dueling for mates. Also, predators may flip them over. In many cases, the turtle can use its head to jack up and right itself with the help of its claws.

Sometimes, however, the terrain prevents righting, and dooms the turtle to die on its back.

Hallock said there’s a chance the land-traveling turtles Ranger and I discovered were moving from their overwintering site to a new pond for the active season. If so, they were bound to be disappointed, because smaller surrounding ponds within a mile or more were dry.

Painted turtles have super survival powers. During warm months they must breathe air to meet their body’s’ oxygen requirement. While underwater during winter, however, they can absorb some oxygen through their skin, mouth and cloaca.

Even more impressive, painted turtles can nearly shut down their metabolic rate in winter to hibernate for months in hypoxic (low oxygen) and anoxic (no oxygen) environments, The Nature Conservancy’s Cool Green Science blog says.

“Although it prevents them from being active, the low metabolic rate also reduces their energetic needs to a bare minimum, allowing them to survive without food or oxygen.”

But even the turtle’s super adaptations are no match for prolonged drought.

With irrigation and development dropping groundwater levels and our compromised climate being stingy with precipitation, countless wetlands in the region this spring are little more than withered grass and parched mud.

This trend is bad news for all sorts of wildlife, including turtles and people who’ve learned to appreciate them.