By Nick Gibson The Spokesman-Review

On a sunny Thursday afternoon, seven Tekoa residents in matching gray shirts stand smack dab in the middle of a steel railroad trestle, 115 feet above Highway 27 and Hangman Creek.

They are drinking in the views of the lush, rolling hills of the Palouse, green with budding wheat. Behind them looms Tekoa Mountain, and to the east is the little town they call home.

“Oh would you look at that, you can see all of town from here,” Fran Martin remarks to her husband, Pete, president of the Friends of the Tekoa Trestle. 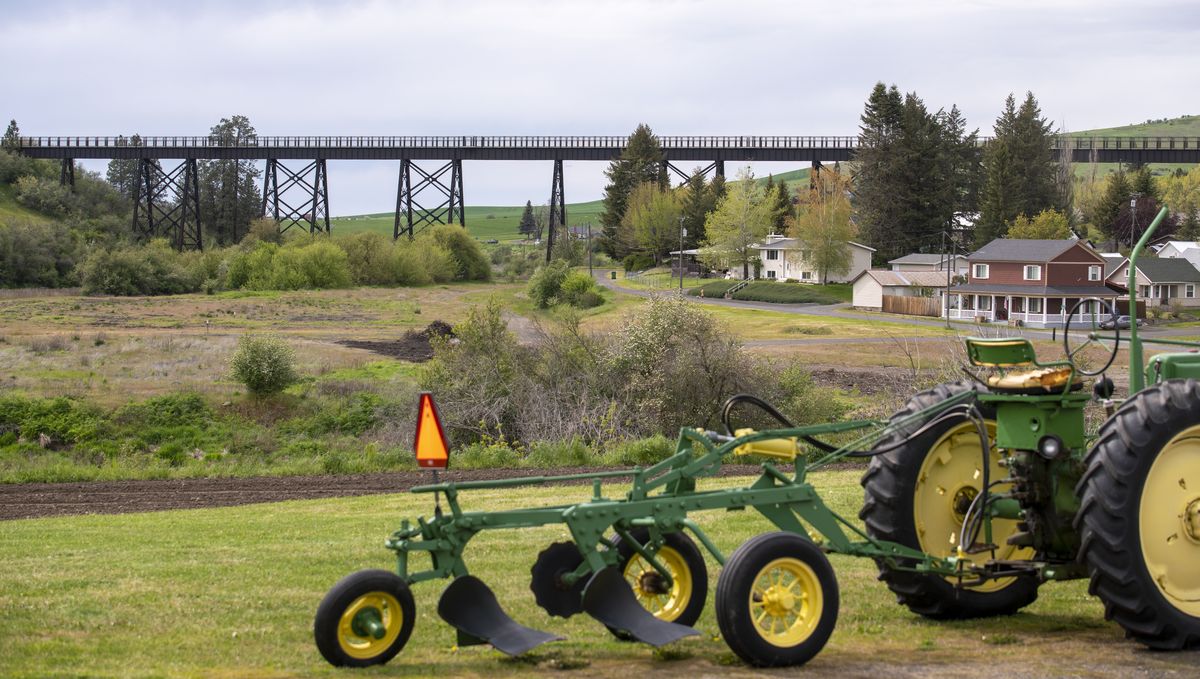 The recently paved and renovated railroad bridge in Tekoa, Washington is now part of the Palouse to Cascades State Park Trail shown Thursday, May 26, 2022. The old bridge goes over Highway 27 as it enters Tekoa. (Jesse Tinsley/The Spokesman-Review)

Someone asks, “First time up here?” followed by a chorus of laughs from the rest of the Friends of the Tekoa Trestle.

Soon, riders, hikers and bikers on the Palouse to Cascades Trail are likely to have the same reaction as they make their way across the Tekoa Trestle for the first time after a dedication on Sunday.

The Tekoa Trestle has been an icon of the town since its construction in 1909 by the Milwaukee Railroad Co. Now, after years of advocacy from locals and trail riders alike, the 975-foot bridge is open to the public, and the little town of Tekoa hopes it becomes an economic driver for the rural community.

“A lot of people said it’d never work,” Pete Martin said. “The trestle was the symbol of the town forever. People kept saying we’re never gonna see anybody go across that, you know, we just don’t think it’s possible. We said we’re gonna stay with it and stay with it, and we did.”

Tekoa has served as the anchor of the Palouse to Cascades Trail for quite some time. The Milwaukee Railroad Co. went bankrupt in the late 1970s, and the state took ownership of the throughway shortly after, creating the cross-state trail. Lisa Anderson, trails program manager for Washington State Parks, said there are still some gaps in the trail, and an active rail line between Royal City and Warden.

The trail runs right up to the trestle, but its dilapidated state forced through-travelers to take a 3.2 -mile detour to continue on to the Idaho border. That detour took trail users right past Monte Morgan’s property, a founding member of the Friends of the Tekoa Trestle.

Morgan grew up in Tekoa and said he always knew the potential the trestle had. He used to crawl out on the wooden beams as an adventurous teen, hugging the waist-high fence for dear life.

One afternoon about 10 years ago, Morgan was hanging out on his property with another local, Ted Blaszak. Blaszak asked Morgan what he still wanted to do in his senior years, and he gestured up to the steel trestle a little over a mile away.

“I want to see that thing open,” he said.

Pretty soon thereafter, the Tekoa Trail and Trestle Association was born, later rebranded as the Friends of the Tekoa Trestle (FTT). Although membership has changed over the years, the mission has always remained the same: secure the funding necessary to convert the rail line to a signature feature of Tekoa.

In order to get legislators and state park officials to commit to the trestle’s makeover, FTT made their presence known from Tekoa to Olympia. In 2015, members traversed the trail from east to west to get a better idea of the work needed to be done on the trail. They also made a few trips to the state capitol, speaking at different hearings and passing out trestle-shaped cookies with “TEKOA” stamped across them.

“We did a fact-finding ride just to see what the trail was like, and what the communities are like, what needs to be done and how we could justify a trestle,” Pete Martin said. “We saw a number of riders on it, particularly on the west side. We kept saying these trails are great, there’s a lot of interest, but because of the lack of trestles, people can’t get through and it really makes a difference on enjoying the whole eastern stretch of the trail.”

Of course, FTT had friends of their own to help drum up support. Fred Wert, chair of the Palouse to Cascades Trail Coalition, helped found the group in 2016 as state legislators were considering a plan that would give adjacent landowners control over most of the eastern section.

The coalition is an advocacy group that works closely with Washington State Parks and Recreation to secure funding in the Legislature, while also working with small communities by helping with improvements, fundraising and upkeep on property not owned by the state.

Those in favor of the plan argued the necessary repairs to that section were too costly, and worried higher traffic would result in damage to the properties the trail intersects. They did not think the 130-mile section of trail was used enough to justify funding repairs, and said transferring stewardship over to adjacent properties would ensure noxious weed control and preventive wildfire measures. Supporters included those representing the Tekoa area: state Reps. Mary Dye and Joe Schmick.

“Even now, the initial problems are still factors,” Schmick said. “There’s still fencing, trespassing and the spraying of weeds on that right of way. I mean, those are still inherent problems that have not been addressed by the parks department.”

The plan passed, and would have stopped any hope of securing funding for the trestle dead in its tracks.

However, a typo rendered it null and void, and it never took effect. Schmick said he is glad the town of Tekoa eventually succeeded in getting the Tekoa Trestle repaired and open to the public, but still has the same concerns.

In an email response, Trails Program Manager Lisa Anderson acknowledged additional trail work is needed. Earlier this year, State Parks wrapped up renovations on a long-neglected but important section of the cross-state trail, the Beverly Bridge. The project cost $5.6 million, and repaired the bridge spanning the Columbia River, finally connecting the eastern and western sections.

“East of the Columbia River, the trail is currently unimproved, and we are working to change that,” Anderson wrote. “Both Beverly Bridge and the Tekoa Trestle are wonderful upgrades to the trail. We are in the process of building a new trailhead in Malden and improving the trail surface between Malden and Rosalia.”

Anderson said the trailhead in Malden will be the first official trailhead on the eastern portion of the trail, and the project is expected to be completed by the end of 2022.

In 2019, the Tekoa Trestle finally received funding for a new deck and safety fencing. The funding was included in the capital budget, including two Washington Wildlife & Recreation Program grants. Anderson said the final renovation costs amounted to a little more than $1 million.

Wert and the trail advocates believe cyclists, through-hikers and equestrians from around the world will flock to Washington to enjoy the through-state trail and the accompanying Tekoa Trestle. Wert said the more the trail improves and word gets out, it will become a real attraction for those seeking their next challenging adventure.

“If you ride a bicycle, and you’d like to explore and go places that are not highways, that go through mountains, and alongside rivers, and can accommodate all kinds of nonmotorized use, why not?” Wert said. “I mean, people love rail trails because they’re accessible; not just for people in wheelchairs, but also they’re accessible to people that aren’t super athletes. You can take your family along, you can ride your horse, you can drive a wagon on a lot of them. You can rollerblade on them. I mean, it’s just why would you not like them?”

Those coming to the Pacific Northwest to enjoy the trail will follow in the footsteps and wagon ruts of the John Wayne Pioneer Wagons and Riders Association. Every spring, equestrians, carts and cyclists from around the region travel from west to east over 18 days on the Palouse to Cascades Trail.

The John Wayne Pioneer Wagons and Riders Association has long supported efforts across the state to improve the beloved trail. The group is in the middle of their 41st trek, and are expected to arrive in Tekoa just in time for the dedication of the trestle.

Association President Tom Short has been making the journey from Rattlesnake Lake to the Idaho border by horseback and wagon for a little over 20 years. He said every day is different on the trail, as you travel from the lush rainforest on the west side, over the scablands, to the rolling hills of the Palouse.

Short is one of the many longtime trail users who thought he would not see the Tekoa Trestle open in his lifetime. He said the organization’s goal has always been to garner support and appreciation for the trail, one person at a time.

On Saturday, the riders will participate in the Battle Day Parade in Rosalia before riding 22 miles to Tekoa. That evening, they will have their annual “White Scarf” ceremony, awarding a white scarf to each traveler that rode the entire distance of the trail.

“We have 120 people this year, but not all of them are doing the whole trip, probably about 30 will get a white scarf,” Short said. “Keeping yourself and your horse sound for two weeks is almost impossible, but when you finally get one, you just feel honored, and you proved something to yourself.”

They will also receive some of the Tekoa hospitality they have grown accustomed to. There is a dinner planned at the only restaurant in town, C&D’s Bar and Grill, followed by a screening of the 1986 classic “The Three Amigos” at the historic Empire Theatre.

On Sunday morning, the riders will cross the Tekoa Trestle as a group, kicking off the dedication event and celebration in honor of the Tekoa Trestle’s completion. Pete Martin said festivities kick off at 10 a.m., with speeches from local officials and the trail group and a raffle for two adult bicycles.

“This is a pretty exciting time for Tekoa, the Tekoa Trestle and State Parks, it really is,” Pete Martin said. “It’s been, really, a dream come true.”

The installation of a stormwater pipe near the Downriver Golf Course will close several streets beginning Tuesday.

Clarke Avenue will be closed between Ash and Elm streets in the Peaceful Valley neighborhood beginning Tuesday to repair a sewer main.

Curb ramps will be carved in the area of Central Avenue and Ruby Street from Wednesday through Friday, causing shoulder closures.

The northbound curb lane of First Avenue between Stevens and Bernard streets will be closed starting Thursday.

The westbound curb lane of Northwest Boulevard will be closed between Belt and Hemlock streets beginning Monday.