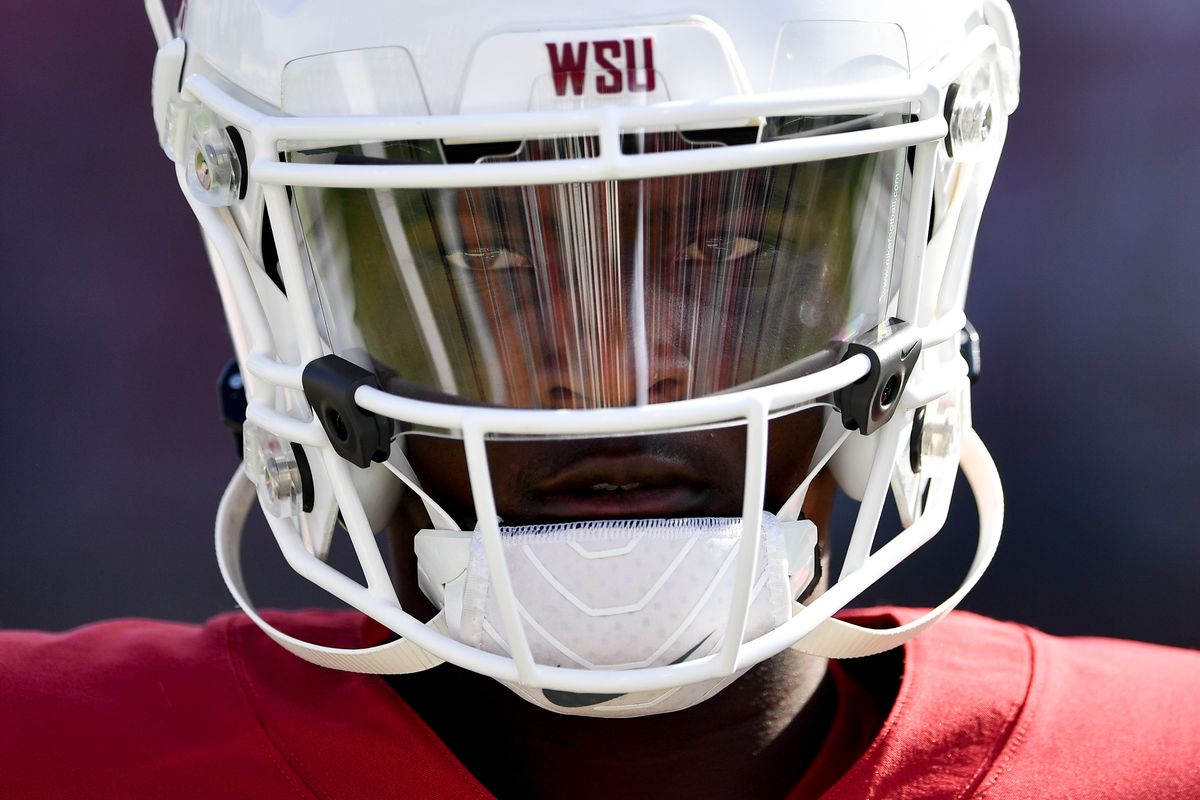 Washington State Cougars quarterback Cameron Ward (1) pauses as he warms up before the first half of a college football game against Cal on Saturday, Oct. 1, 2022, at Martin Stadium in Pullman, Wash. (Tyler Tjomsland/The Spokesman-Review)

PULLMAN – Inconsistency from the Washington State quarterback kept the door open. But right as California arrived, he closed it shut.

Cameron Ward found Renard Bell on a 37-yard touchdown early in the fourth quarter to stamp out any thought of a comeback and the Cougars beat the Golden Bears 28-9 on Saturday in front of a homecoming crowd of 23,021 at Gesa Field.

Ward completed 27 of 40 passes for 343 yards and three touchdowns, but threw two endzone interceptions to keep California in the game.

There seemed to be no urgency from Ward or the offense through three quarters, as the Cougars’ defense stood stout. There didn’t have to be. The Golden Bears managed three points and seven punts on their first eight possessions.

That was until Jack Plummer sparked some life in California with a 49-yard completion to Jeremiah Hunter to set up the teams’ lone touchdown. A familiar feeling of fourth-quarter letdown fell over the Washington State faithful with 13 minutes remaining.

It didn’t last. Ward responded with the 4-play 75-yard drive in one minute and 28 seconds and California couldn’t keep up.

The Cougars forced a 3-and-out and scored again, this time a 9-play 67-yard drive that ended in a touchdown from Ward to Billy Riviere from the one.

Washington State totaled 428 yards and woke up from a sleepy Saturday when it mattered most.

Fans can be forgiven for the sense of collective unease that settled on Martin Stadium early in the fourth quarter of Washington State’s homecoming game against California. | Read more

PULLMAN – Bill Doba’s Friday excursion began at 1 a.m. Pacific Time. There was a 45-minute drive from his lake home in southern Michigan to the regional airport in South Bend, Indiana, a short flight to Minneapolis, a four-hour layover, a three-hour flight to Spokane and a 90-minute drive to Pullman. | Read more

TV Take: At times it wasn’t pretty, but Washington State’s win over Cal was a story of defense

Pretty? No, unless a win, any win, can be considered beautiful. | Read more

15:00 – Cal 0, WSU 0: The Cougars won the toss and deferred to the second half. The Golden Bears will receive in the west endzone.

Jack Plummer scampered for five yards to set the Golden Bears up with a 4th-and-5 from the WSU 41, but they decided to punt and self-inflicted two penalties. Cougars start on their own 14 after a fair catch.

6:02 – Cal 0, WSU 0: Cameron Ward makes a good read on the defensive end to pull an option keeper and convert a fourth down from the WSU 41, but the Golden Bears come up with a stop on the next set of downs.

Nick Haberer punts 49 yards to the Cal 6. Ward starts 3 of 4 for 35 yards, but he missed a wide open receiver on a corner route that could’ve gone for a long gain.

4:26 – Cal 0, WSU 0: Jack Plummer is sacked in the endzone by Quinn Roff and Antonio Pule and somehow finds a way to pick up a yard and avoid a safety.

Jamieson Sheahan’s punt goes 51 yards and Robert Ferrel returns it 12 yards to the Cal 40, where the Cougars take over with a great opportunity to score first.

1:50 – Cal 0, WSU 0: The Cougars squander their great field position with a holding call on a first down trick play, short pass on second down and 10-yard sack by Ethan Saunders on third.

Nick Haberer punts 37 yards to the Cal 15 and calls for a fair catch.

13:18 – WSU 7, Cal 0: Freshman Jaylen Jenkins scores his first career touchdown on a 2-yard run to get the Cougars on the board first.

Punt return and RZ reception from Robert Ferrel set up a short TD run from frosh Jaylen Jenkins, who evades trouble in the backfield.#WSU is up 7-0 at 13:18, 2Q. pic.twitter.com/i3TS7jVNig

Jack Plummer completed a 33-yard pass to Michael Sturdivant to set up the field goal.

JMIKE with the YAC. @jmike_04 has Cal on the move.

6:52 – WSU 7, Cal 3: Cameron Ward throws deep into double coverage and is intercepted in the endzone by Daniel Scott.

Ward looked good on a couple of 3rd-and-long conversions, but decision making hasn’t been his strong suit. That’s interception No. 6 this season for the WSU QB.

TAKERS. 🤌@theDScott7 with the pick for the Bears!

3:03 – WSU 7, Cal 3: Back-to-back sacks by Francisco Mauigoa and Christian Mejia stall the Cal drive. WSU takes over after a touchback on the punt.

If you’re a fan of defense – or lackluster offense – this is the game for you.

Not much separated Washington State and California in the first half, as the Cougars hold onto a 7-3 lead.

WSU scored its lone touchdown early in the second quarter on a 2-yard run from Jaylen Jenkins, after a punt return set them up in the redzone. Other than that, the Cougars have 103 total yards – all of them passing – and are 3 of 7 on third down conversions.

Quarterback Cameron Ward is 12 of 18 and killed a drive with an interception he threw into double coverage in the endzone.

The Golden Bears haven’t fared much better. Cal has 121 total yards and are 3 of 9 on third down. Its best drive resulted in a 42-yard field goal. QB Jack Plummer is 12 of 16 for 111 yards and has been sacked three times.

WSU will receive the second half kickoff.

Tight game at the half in Pullman. 👊 pic.twitter.com/7NtjdOaWxK

13:51 – WSU 14, Cal 3: Cameron Ward and the Cougars come out of the locker room firing as Ward connects on a 47-yard pass to Renard Bell and a 17-yard touchdown to Robert Ferrel.

Cougs coming out HOT in the second half 🔥

Cougars start again at their own 35.

9:38 – WSU 14, Cal 3: Cameron Ward escapes from pressure and throws back across his body into heavy coverage for another interception.

That’s Ward’s second of the game and 7th of the season. Cal starts on its own 2.

5:59 – WSU 14, Cal 3: Jaydn Otts has three first down runs, but the Golden Bears drive stalls again and ends in a punt for the 7th time today.

1:18 – WSU 14, Cal 3: Nakia Watson totals one yard on consecutive carries, Cameron Ward throws an incompletion and the Cougars punt to the Cal 10, after a 7-play 40-yard drive.

13:28 – WSU 14, Cal 9: Jack Plummer finds Jeremiah Hunter down the right sideline for a 49-yard completion and Jaydn Ott punches in a 2-yard touchdown for Cal’s first of the game. Mavin Anderson falls in the backfield after a shovel pass on the 2-pt attempt.

The Golden Bears find new life early in the fourth quarter after punting seven times on their first eight possessions of the game.

Bell has seven catches for 114 yards, accounting for about a third of the Cougars’ offense.

6:19 – WSU 28, Cal 9: Cameron Ward finds Billy Riviere in the flat for a 1-yard touchdown and the Cougars are likely going to go on to win.

Ward has responded from his early struggles. He is 27 of 40 for 343 yards, three touchdowns and two interceptions.

2:13 – WSU 28, Cal 9: Kai Millner’s fourth down pass falls incomplete and the Cougars will run out the clock for their first Pac-12 win. They improve to 4-1 on the season.

Last week was almost a game to remember for Washington State. It quickly turned into a game to forget.

Despite the loss, WSU looked strong against the Ducks and during a win over Wisconsin on Sept. 10. They also edged FCS-rival Idaho in the opener and handled Colorado State, who is one of the worst FBS teams in the country.

The Golden Bears are coming off a 49-31 win over visiting Arizona, where they amassed 599 total yards behind a career day from running back Jaydn Ott.

Ott rushed 19 times for 274 yards in the win over Arizona. Quarterback Jack Plummer – a summertime transfer from Purdue – completed 18 of 28 passes for 245 yards and three touchdowns.

Cal also has wins over FCS UC Davis, 34-13, and UNLV, 20-14. The Golden Bears lone loss came at Notre Dame, when a potentially-tying hail mail fell off the chest of a receiver in the endzone.

Both teams are one of eight Pac-12 schools with a 3-1 or better record.

A win would again put the Cougars in discussion for a AP Poll Top 25 ranking ahead of another primetime spot in Week 6 at No. 6 USC.

California’s true freshman running back Jaydn Ott is third in the NCAA with 8.3 yards per carry. He has won three Pac-12 Freshman of the Week awards, though a majority of his stats were tallied in a win over Arizona last week.

Washington State linebacker Daiyan Henely has a growing gap in his team-high for tackles (38) and tackles for loss (8.5). He is tied for No. 4 in the country in tackles for loss.

If you don’t know, now you know.

The top QBs in the red zone this season🔥 pic.twitter.com/rXTnt29TWp

California has dominated the all-time series against Washington State with a 49-29-5 record.

The two teams have traded wins in the past six meetings and the Golden Bears have won 12 of 16 games sine 2005. Last year the Cougars won 21-6 in Berkley, California with Nick Rolovich still as head coach.

‘We’re not in that losing mindset’: Early-season momentum at stake when Washington State hosts Cal for homecoming

Early-season momentum is at stake when Washington State plays host to Cal for a Pac-12 clash between well-matched teams, both of which sit on the bubble of relevance. | Read more

Two-minute drill: Keys to victory for Washington State against Cal

The pick: Why Washington State will beat Cal

PULLMAN – Last weekend, Washington State outplayed a Pac-12 heavyweight for all but 5 minutes. The Cougars crumbled in crunch time and Oregon rallied, pulling off a two-score comeback in the waning moments of the game. | Read more

After collapsing down the stretch Saturday in a stunning loss, Washington State’s defense is putting an extra emphasis on “finishing.” | Read more

What is it? Coming off a late collapse in a heartbreaking loss to Oregon, the Washington State Cougars (3-1, 0-1 Pac-12) look to rebound on homecoming against an improved team from Cal (3-1, 1-0). | Read more