Is there anything better than spending an entire day vegging out in front of the television set, watching a golf tournament that has the ambiance of a football – both U.S. football and the world's definition of the game – game? Sure there is. But it's still pretty cool and it was how we spent our Friday. About 11 hours of golf broken up with seemingly endless strings of commercials. But today will be even better in that the golf is still on, albeit on NBC, while, during the long commercial breaks, there is real football to watch. I'm not sure I'm leaving the Laz-E-Boy much today either. Until about 10 p.m. tonight. Read on.

• There is golf and football, sprinkled with pennant race baseball, on the tube today, one of the better days of sports viewing for the year. But this evening I'll have to put on the Cougar game in Seattle against the second-ranked Oregon Ducks. And then at halftime I hop in the car and drive to the KXLY studios, where I watch the second half with tag-team partner Dennis Patchin, in preparation for our post-game call-in show. If the game were in Pullman (it is a home game for the Cougars after all), Dennis and I would be there to host the show. But it's in Seattle, at CenturyLink, site of Monday night's Seahawk win over Green Bay and Thursday night's UW upset of Stanford. The location, on the West Side of the state, is the subject of Adam Lewis' commentary on the Seattle sports website, SportsPress Northwest. Lewis' point, one that is probably held by a lot of folks over here, is, with the new media dollars available to the school – ranging for $15 to $25 million a year over the life of the deal with ESPN and Fox – the Seattle game is obsolete. Which would be true if the game existed in an athletic-department vacuum. But it doesn't. And that's why the game is played where it is. Let's put it this way: If football is the front door to the university, a front door that's received a shiny new coat of lacquer recently, what's behind the door, where the rest of the university resides, is a bit thread-bare right now. The state has pulled back – and back and back – it's financial support of the school, meaning fund-raising has become Job One – and Two and Three – for president Elson Floyd and the rest of the administration. If you peruse the schedule of public events held by WSU this week in Seattle, it's all about growing support for not only athletics but also the remainder of the university. And that schedule doesn't include the behind-the-scenes events Floyd and company are holding. Those are the driving forces behind the Seattle game and always have been since a couple of years after its inception. The event began as a way for the athletic department to say thanks to its West Side alumni base but, thanks to its popularity in other areas of the university, became an important aspect of Floyd's outreach programs. And that's why it will be on the schedule in the foreseeable future.

• So what about the game on the CenturyLink turf? WSU fans are probably dismayed after the Colorado meltdown last week but maybe heartened by the last two games with the Ducks, not-nearly-as-bad-as-they-could-have-been 43-23 and 43-28 losses. But don't take too much from those games. The Cougar defense played well in them, in large part because defensive coordinator Chris Ball's favorite 3-3-5 scheme was invented years ago to defend against Oregon-like spread offenses. The defense forced turnovers and kept the Cougars in the games, though there was never a feeling – at least for me – the Ducks wouldn't win. But Ball is in Tempe, working with ASU's secondary, and the Cougars' defensive formula under Mike Breske has changed. Breske has been getting a lot out of a thin group by mixing and matching looks. In run situations, Breske runs out his best front seven against power formations. In passing situations, the faster guys come in and defend the spread field. The system has worked passably well, but Colorado turned it on its ear late in the game last Saturday, keeping the same 11 guys on the field for pretty much every live-ball play in the final drive and not allowing Breske to get the prefered group in. Which brings us to today. Oregon will play at a tempo unequaled anywhere else in the U.S. The Ducks will keep the same guys on the field, spread the formations, run or pass, force the Cougars to keep its defense intact for the most part and react to Oregon's attack. More than likely Breske will try to keep his speed guys on the field, guys like Toni Pole up front and Cyrus Coen at backer, attempting to keep up with the quick Ducks in space. Which leads me to believe Oregon will attack the Cougars in the middle of the field, using what is usually the nation's most proficient rushing attack to grind out drives, hoping for a missed tackle or two leading to a big play. How efficiently WSU subs (if it can), how quickly the defense gets set and how well the Cougars stay in their gaps will tell the tale tonight on that side of the ball.

• Washington State: Christian Caple is over on the Wet Side (not so aptly named recently) and has the coverage today, what with his advance and two-minute drill and a morning post full of links. ... The Ducks seem ready for Mike Leach's Air Raid offense. ... It's Saturday so we have our link to Ted Miller's mailbag on ESPN.com. ... What to know what's going on with the Pac-12 and DirectTV? Jon Wilner keeps you informed.

• EWU: Montana is in town, which is always a big deal, but the Griz are at .500, not their usual winning percentage four weeks into the season. And the Eagles will try to drop UM to 0-2 in Big Sky play, something that hasn't happened since 1992. Jim Allen has all the particulars in his advance. ... Elsewhere in the Big Sky, second-ranked Montana State travels to Southern Utah to face quarterback Brad Sorenson and the potent Thunderbird offense. ... Weber State will try to get its first win of the season.

• Idaho: The Vandals are traveling once again, this time to North Carolina. Josh Wright has an advance of UI's attempt to win for the first time this season along with this blog post. ... Expect Utah State to raise its record to 4-1 today. After all, the Aggies are playing UNLV. ... San Jose State has never won on the East Coast. With Navy, the Spartans have a chance.

• Whitworth: Speaking of traveling, the Pirates are on the road again, though they carry a 4-0 record into their Northwest Conference game at Pacific (Ore.). Jim Meehan has an advance.

• Chiefs: The Chiefs open the home part of the WHL season tonight in the Arena, hosting Tri-Cities. Jess Brown has an advance of the Spokane's second game of the year. ... Portland have already played four times and are 3-1 after a 1-0 win over Kelowna on Friday night.

• Preps: There was no big matchup of undefeated big school teams last night, but there were a lot of important games, including Shadle Park's 30-7 decision over Mt. Spokane. Greg Lee has the story, and he also has this piece on Ferris' win over North Central. ... Jess Brown was at Central Valley's win over Lewis and Clark while Mike Vlahovich has the story of University's victory over Rogers. ... We also have a roundup of the rest of the local football action, the peak performers and a roundup of other sports.

• Seahawks: The biggest aspect of today's coverage? Injuries. Darn lazy reporters. ... Brandon Browner has paid the price for a bush hit. ... The passing game has been grounded. 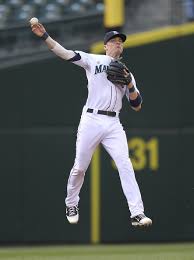 • Mariners: Ironic stories about the Mariners' 8-2 loss to Oakland last night. The sidebars are about Brendan Ryan's defensive prowess. They are countered by the M's defense faltering in the defeat. ... I'm guessing 2012 will be remembered as the year of the no-hitter. The Reds' Homer Bailey threw the seventh of the season last night, defeating Pittsburgh 1-0.

• Golf: We've rambled a bit about the Ryder Cup the past couple days, so we better pass along a couple stories about the competition. Being that's it's being held outside of Chicago, we went to the Windy City for the stories.

• Now that we're done with our morning report we can settle down to watch golf, football, baseball, maybe even some auto racing. OK, probably not. But I'll watch anything to avoid commercials. Until later ...