Avista Corp. is asking Washington regulators to approve a 9.3 percenthikein residential electric rates and a 5.1 percent hike for natural gas service by next spring. For the average residential customer in Washington, monthly electric bills would go up $7.13, for a total of $84.14. Monthly gas bills would go up $3.26, totaling $66.71. Avista is evaluating whether to seek similar rate hikes in Idaho.

The Washington Utilities and Transportation Commission is accepting comment on the rate case. Comments can be sent to comment@utc.wa.gov or P.O. Box 47250, Olympia, WA 98504-7250. 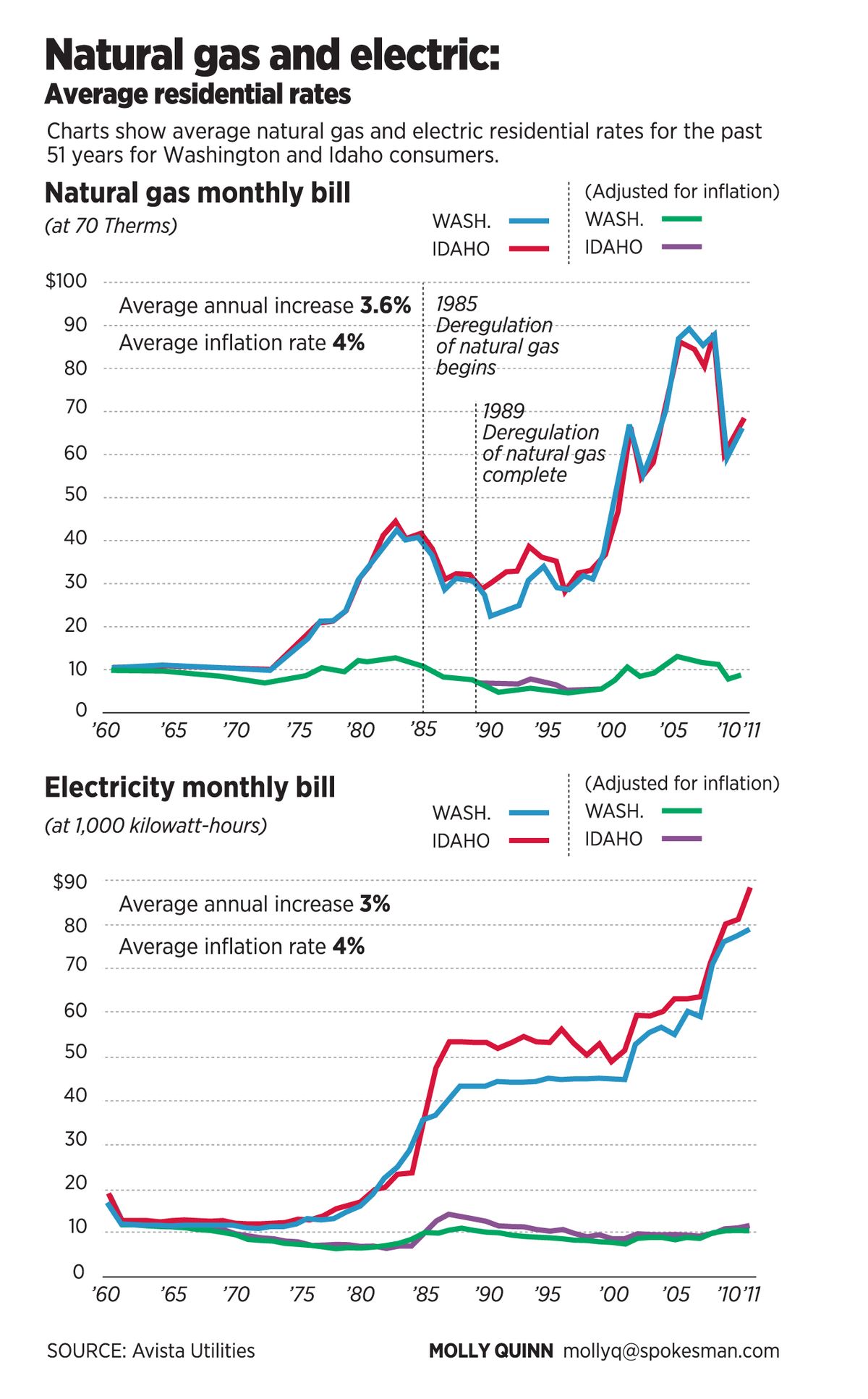 “Why, at a time when everyone else is having to make do with what’s available, are Avista and their shareholders wanting more, more, more?” asked the Veradale resident.

Nearly 200 customers of the Spokane-based utility have written or called Washington regulators to voice their views on Avista’s latest request for a 9.3 percent increase in electric rates and a 5.1 percent hike for natural gas. The overwhelming majority opposed the request, which would add about $120 a year to a typical household’s electricity and natural gas bills.

Customers are cutting back on spending, and their hometown utility should follow suit, they said. Instead, Avista is asking for its fourth rate hike in four years.

The company’s goal of boosting shareholders’ profits to 10.9 percent also hit a nerve.

“Avista is like the Sheriff of Nottingham character from Robin Hood,” wrote one disgruntled customer.

But Avista officials say that need – not greed – is driving the annual rate-hike requests. The utility is facing a collision of factors that is driving up costs without adding revenue, including the need to replace millions of dollars worth of aging equipment, said Kelly Norwood, Avista’s vice president of state and federal regulation. That’s put pressure on ratepayers, he acknowledged.

He also defended Avista’s goal of boosting shareholders’ profits. The company competes with other utilities for investors, who help finance Avista’s capital investment through stock purchases.

Avista anticipates the yearly requests for higher rates to continue.

Norwood said it’s a much different era than the late 1980s through the late 1990s, when Avista sold surplus power to California. Rates were stable for nearly a decade.

“We don’t like raising rates, either. We hate it,” said Jessie Wuerst, an Avista spokeswoman. “But you’ve got to maintain a company.”

The company has outlined its case for higher electric and gas rates in hundreds of pages of testimony filed with the Utilities and Transportation Commission, the state agency that regulates investor-owned utilities. By mid-April, the three-member Utilities and Transportation Commission must rule on Avista’s request. In recent cases, the commission has granted at least part of Avista’s requests.

Meanwhile, customers such as Hicks are weighing in. The commission will also schedule meetings for public testimony. Avista’s industrial customers will look over the proposal, as will advocates for low-income families.

Simon ffitch, chief of the Public Counsel Section, said he sympathizes with customers.

“This revolving door approach to ratemaking is really a new phenomenon in the last decade or so,” he said. “For companies to publicly state that they’ll be filing a rate case every year is really very unusual and obviously very, very burdensome in this economy.”

“Costs are flat. Inflation is flat. Growth is flat. Earnings are flat. Unemployment is high. But, somehow the utility companies need more money every year,” ffitch said. “We’re hoping the commission will take a hard look at these things.”

Avista isn’t alone in asking for yearly rate increases. Puget Sound Energy and Pacific Power, two other state-regulated utilities, are on a similar path. Equipment replacement is a key part of their rate requests.

“The companies, in general, have aged to the point where their infrastructure needs to be replaced,” said Mike Parvinen, assistant director for energy at the Utilities and Transportation Commission. “It’s putting cost pressure on their existing customers.”

Here’s a rundown of some of the factors Avista officials say are driving up costs:

Aging equipment: Most of Avista’s 1950s-era equipment is wearing out. Avista expects to spend $250 million replacing and upgrading old equipment this year and $1.2 billion over the next five years.

Though costs for steel, aluminum and cement are down from their peak, they’re still significantly higher than they were five to seven years ago, Norwood said.

In addition, the depreciation embedded in utility rates is based on original equipment price, so there’s sticker shock when the utility replaces something such as a 50-year-old transformer, he said.

Reliability: Avista and other utilities are under a national mandate to improve the reliability of their transmission system. The mandates followed the largest electrical blackout in U.S. history in 2003, which affected about 45 million people in the Northeast and Midwest.

Higher energy costs: When public utilities districts built dams on the mid-Columbia in the 1950s, Avista – then Washington Water Power – helped finance the construction in exchange for long-term contracts for cheap electricity. Avista used to buy about 10 percent of the electricity used by customers at cut-rate prices of 1 to 1.5 cents per kilowatt hour, Norwood said.

Those contracts began expiring in 2005. Some have been renegotiated, but at current market costs, which are about 4 to 4.5 cents per kilowatt hour.

Customer growth: Despite the economic slowdown, Avista’s customer base and demand for energy is growing at 1 to 1.5 percent per year. That requires building new electrical generation to serve customers, and it’s more expensive than getting power from existing plants, Norwood said.

Shareholder profits: Avista wants to increase profits for its shareholders, who finance about half of the company’s capital expansion through stock purchases. The rest of the money comes from borrowing. Avista is asking state regulators to boost the company’s allowed return on equity from 10.2 percent to 10.9 percent. Return on equity is the amount earned on a common stock investment. (Avista’s actual return on equity has ranged between 5.6 percent and 8.1 percent over the past five years, less than the amount allowed by state regulators.)

Avista is at a disadvantage when it competes for shareholders, Norwood said, because other state utilities commissions allow higher returns on equities.

Return on equity levels have been adjusted downward for Washington’s other investor-owned energy utilities. Puget Sound Energy has a 10.15 percent allowed return on equity. Pacific Corp.’s is 9.8 percent.

“The commission wants to set rates at levels that will allow the utility to attract investors,” the Utility and Transportation Commission’s Parvinen said. But if return on equity is set too high, then customers end up paying utility rates that are higher than necessary, he said.

“The commission tries to find that fine line,” he said. “It’s a balancing act.”