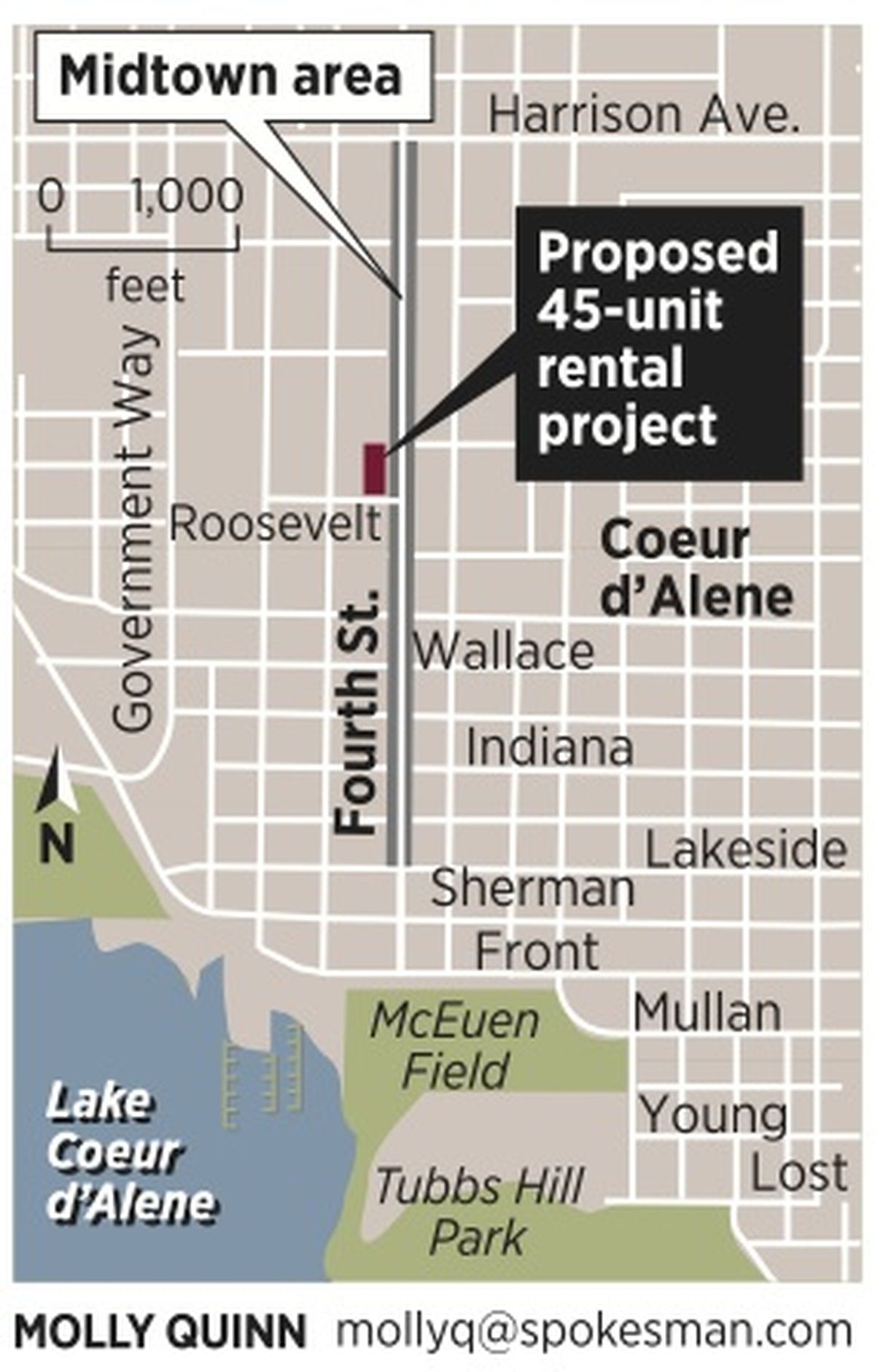 A Coeur d’Alene condominium project postponed three years ago when the economy faltered has resurfaced as a rental housing proposal geared toward workers with moderate incomes.

The city of Coeur d’Alene devoted $1 million toward a facelift of an area known as Midtown in 2008. The neighborhood runs mostly along Fourth Street, a northbound arterial that connects downtown with Interstate 90.

The city also was working with its urban renewal agency, the Lake City Development Corp., and with the Idaho Housing and Finance Association to bring “workforce housing” to Midtown. In 2008, a proposal called for up to 35 condominiums in a four-story building that was to include ground-floor retail.

That project was reintroduced Dec. 21 at an LCDC board meeting as a 45-unit rental project that would offer studio, one-bedroom and two-bedroom units to people who earn between 40 percent and 60 percent of the area median income. Representatives of The Housing Co., IHFA’s nonprofit affordable-housing development arm, asked the urban renewal agency to contribute $447,000 toward the project, which will seek $5.3 million in federal tax credits as its primary funding source.

“We see that the market is improving for rental product,” said Douglas Peterson, director of The Housing Co. “The hope is that this will bring a strong residential component to an area that doesn’t have a lot of residential activity right now.”

LCDC Executive Director Tony Berns said the urban renewal agency has been trying to add affordable housing units to Midtown for years. But, he said, “The world fell apart, economy-wise. The reason it’s got life right now is because they’ve redefined the project to be rentals. The only thing that seems to be working these days is rentals. Nobody’s building any condos.”

The Midtown project hinges on receipt of federal tax credits. The Housing Co. would raise money for the project by selling the tax credits to investors for about 84 cents on the dollar, according to LCDC board minutes.

LCDC board members will consider the proposal again at their January board meeting.

The building proposed for Midtown would be on the northwest corner of Fourth Street and Roosevelt Avenue. It would be 48,000 square feet spread over four stories with 8,000 square feet of ground-floor retail, Peterson said. Units ranging in size from 500 to 1,150 square feet would be offered to people earning between 40 and 60 percent of median income. For example, a single person making from $16,080 to $24,120 would qualify.

“This is not subsidized housing,” Peterson said. “This is for people who work and they’ll have a monthly rent and they’ll have to pay the rent. It’s a sliding scale based on income and family size.”

Peterson said The Housing Co. should learn this spring whether it received the federal Low Income Housing Tax Credits. If other funding sources fall into place, he said, demolition of two existing buildings on the lot and construction could begin in late 2012.