Cost: Free admission. There will be free carousel rides from noon-6 p.m. Monday.

My first visit to Pig Out in the Park began with a gesture toward healthiness – or at least not total indulgence.

Yes, it was coated with mayonnaise and cheese, but the mayonnaise was “house made” and the cheese wasn’t nacho (it was cotija) and what it was coating wasn’t just corn but organic corn.

And this delicious elote came with a bit of advice from the purveyor at Azar’s Exquisite Elotes, Hailey Birdsall, that would come in handy an hour or two later, when things had gotten decidedly more indulgent and I was doing my best to gin up the courage to eat a fried Snickers covered with whipped cream, chocolate sauce and sprinkles.

“The only rule is,” Birdsall said, “you’ve just got to commit to the first bite.”

And to the second and the third and the countless ones after that. 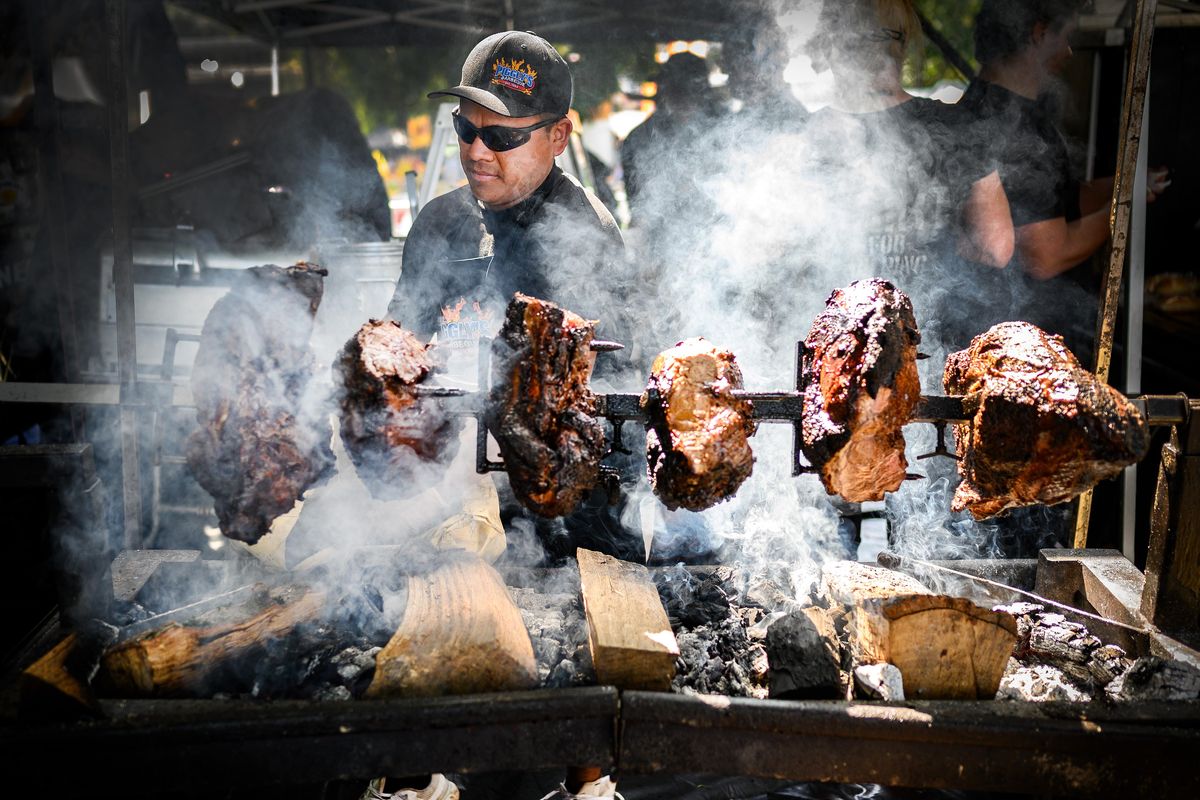 Jesus Andrade with Piggly’s BBQ, adds mesquite charcoal under roast beef rotating on a spit Wednesday during the first day of Pig Out in the Park in Spokane’s Riverfront Park. (Colin Mulvany / The Spokesman-Review)

I’d never had an elote. And as good as it was, I was eager to get back to something I know and love, that gives me great spiritual assurance, despite the attendant physical discomfort: eating large amounts of barbecue in 90-degree heat.

It’s an activity I couldn’t avoid growing up in South Carolina, and it was one that I happily returned to in Riverfront Park on Wednesday afternoon at the expansive Piggly’s booth, where big hunks of beef turned on spits and smoke from the grill only made it hotter.

I wanted pulled pork, but that wasn’t available, so I went for second best: brisket.

I’m no food critic, because here’s as deeply as I have ever thought about food: Did it taste good while I ate it and was I full when I was done?

The answers at Piggly’s were yes and definitely yes.

But I wasn’t done eating.

After a brief break spent watching a band called 3D play a spot-on cover of “Neon Moon,” it was off to find the legendary fry block, which was the only food anyone had mentioned when told I would be making my maiden Pig Out voyage.

It wasn’t hard to find.

“Block o’ Fries” said a sign right around the corner from the Clocktower Meadow stage.

I forked over $9 and asked the cashier about how they made what I imagined would be a solid brick of fried potato.

“They’re hand-drilled,” she explained, then offered to let me come around and watch cook Chris Lee hand drill four – four – russet potatoes into a massive mound of raw curly fries.

The trick to making the mass of curly fries dense, Lee explained, was the use of a second fry basket that presses the fries down into the first basket and helps them “set up as an actual block.”

Did my face drop at the thought of four potatoes converted into an “actual block”?

Maybe so, because Lee had some surprising information seemingly meant to ward off any health concerns: “This is the only block of fries on the block that’s gluten-free.”

Being gluten-free is not a quality I typically look for in a fry block, but it did seem to offer some cover for at least some of my doubts about the gluttony I was about to engage in.

Did I eat an “actual block” of four fried russet potatoes covered in garlic parmesan while I sat in the sun and watched ducks swim hopefully around in the river, waiting for me to give up and share?

No, I confess I could not. But I ate as much as I could without precluding myself from pressing on in this pointless mission to pig out at Pig Out.

But before I could go on, I was dogged by a deep question: Can one pig out at Pig Out without eating pig?

I, for one, couldn’t. I still wanted pulled pork.

So I passed up Indian food, Greek food, snow cones, ice cream and tacos before I found it on the menu of a little booth called Gourmet Soul, where I got the small size but probably ate a half-pound of pig.

There, Dereck Perot explained that he and his fellow barbecuers follow a simple mantra: “We aim to please ya. We love to feed ya. We’re always glad to see ya.”

I hereby proclaim these were not empty words. I was pleased, fed and warmly greeted. And I was very full.

Having now eaten $21 worth of barbecue, a mayonnaise covered piece of corn and some fraction of four fried potatoes, I had a difficult decision to make: What should I select from the menu of Azar’s Deep Fried Haven? Deep-fried pizza? Deep-fried lasagna? Deep-fried bacon? A deep-fried cheeseburger? A deep-fried Philly cheesesteak?

I settled on the deep-fried Snickers. I said yes when asked if I wanted whipped cream, sprinkles and chocolate sauce.

I did all this, and then I ate an elephant ear the size of an elephant’s ear that was covered in chocolate sauce and huckleberry sauce.

It tasted good, I was full and I needed to leave. But as I passed the bacon-wrapped hot dog stand on my way out, a little thought popped in my mind: Maybe I’ll come back tomorrow.