TEMPE, Ariz. – All week, they were confident they’d made the right moves.

At times, it looked better for Washington State, and Mike Leach said as much in his postgame press conference. But far too often in their 38-34 loss to No. 18 Arizona State Saturday afternoon at Sun Devil Stadium, the Cougars mirrored the team they were two weeks ago against Utah, and a week before that against UCLA.

It’s a team that hasn’t been competitive on defense and one that isn’t producing quite enough on offense to overcome all the defensive shortcomings, which seem to multiply every time the Cougars take the field.

Even after WSU made a change at defensive coordinator, shifted a few things around on the depth chart and vowed to simplify schemes, the Cougars were left scratching their heads at the end of four quarters.

“I thought as a team, we played extremely hard,” WSU head coach Mike Leach said. “I thought we let them slip through our fingers too many times. I think that we’re still searching for that identity and I still think that we need to trust one another to do our job.

“All sides of the ball, I thought we did a better job of doing our job this week and I thought we played harder. But there’s too many guys thinking they have to compensate for somebody else. Well, that doesn’t lead to very good play and it would happen in key situations.”

The Sun Devils hit the Cougars with explosive plays, and Jayden Daniels led a 10-play, 70-yard scoring drive inside the final three minutes. ASU’s true freshman quarterback capped it with a courageous leap into the end zone, contorting his body in the air as he was smacked by WSU’s Skyler Thomas.

Daniels may wear a bruise across the right side of his stomach Sunday morning, but it was a sacrifice that was well worth making, considering ASU will probably shoot up a few spots in the AP Top 25 after winning its fifth game and improving to 2-1 in conference play.

WSU’s final drive began on a promising note, as Anthony Gordon completed a 29-yard pass to Rodrick Fisher over the middle, pushing the Cougars to the 45-yard line. Gordon’s next completion to Winston Jr. went for 12 yards, which would give the quarterback a chance to heave one more deep pass into the end zone, where the Sun Devils’ defensive backs would face a tall test against WSU’s imposing receivers.

But ASU stomped that out, getting to Gordon before he could take a real shot, and thus the Cougars’ Pac-12 drought continued in the desert. They’ve lost four straight against conference opponents, dating to the 2018 Apple Cup. For the Cougars to reach a fifth consecutive bowl game, they’d need to collect at least three wins from the back half of their schedule, which pits WSU against Colorado, Cal, Oregon, Stanford, Oregon State and Washington. 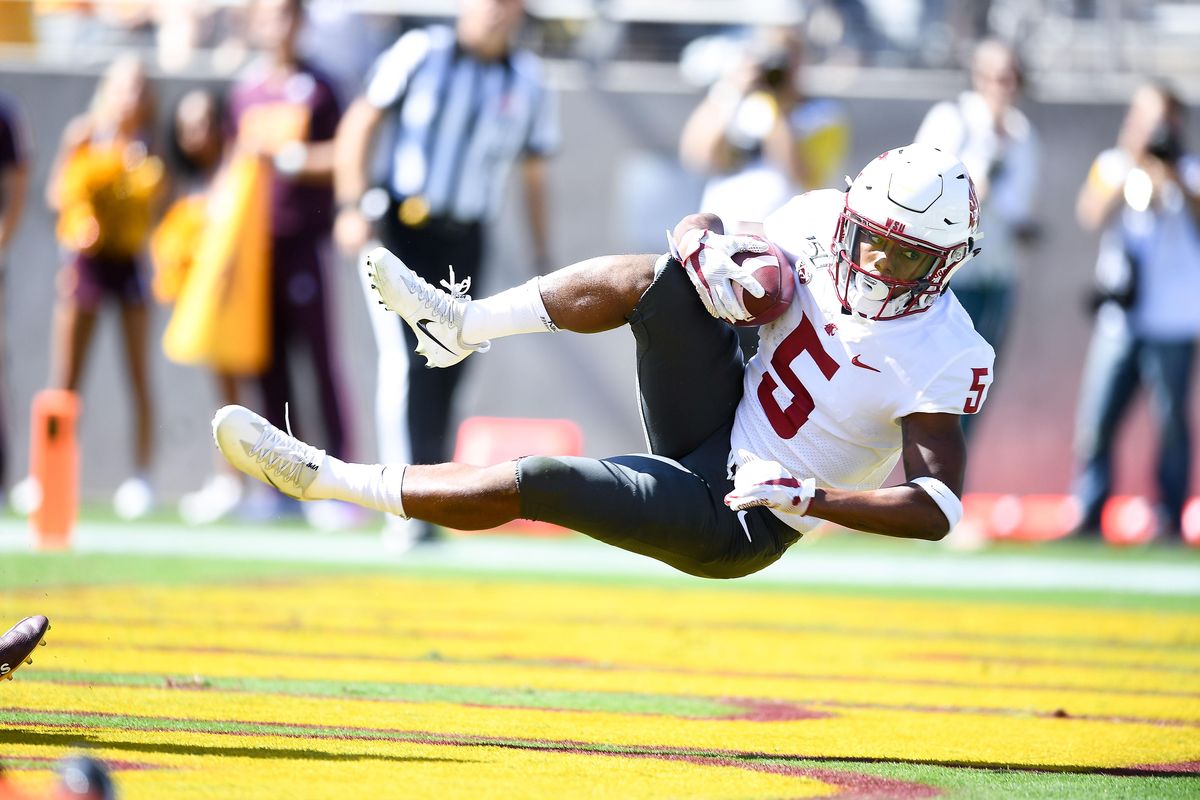 Washington State Cougars wide receiver Travell Harris (5) lands in the end zone with a touchdown catch during the first half of a college football game on Saturday, October 12, 2019, at Sun Devil Stadium in Tempe, Ariz. (Tyler Tjomsland / The Spokesman-Review)

“We squandered a few plays out there, definitely left a few more scores out there,” said Gordon, who completed 44 passes on 64 attempts – both career highs – for three touchdowns and no interceptions. “What it came down to at the end is we were one play short on offense and one stop short on defense. Just as a team, we’ve got to come together and make sure that, keep going through this adversity and find a way to get it done next week.”

Afterward, Cougars players maintained they aren’t focused on the bigger picture. Perhaps because they have too many small things to figure out. Before Utah’s 52-7 win against Oregon State on Saturday, UCLA (67 points), the Utes (38 points) and ASU (38 points) each had their highest-scoring game of the season against WSU, which has allowed 143 points in Pac-12 play and 1,715 total yards of offense – at least 500 in each game.

For a quarter, it looked like the Cougars had quelled many of their defensive issues. After allowing points in nine straight quarters, they blanked the Sun Devils in the first and came out of the period with a 10-0 lead. WSU pressured Daniels to the tune of three sacks in the first quarter and held ASU to 23 total yards of offense.

“I definitely think we put a lot more together this week and prepared well,” nose tackle Dallas Hobbs said. “… We’re just missing a few pieces, still, that we’ve just got to fix and I think it’s all going to fall in line.”

But one of those pieces – eliminating big plays – loomed large once the second quarter began and through the remainder of the game. WSU’s defensive backs had fits containing ASU receiver Brandon Aiyuk, who hurt the Cougars with 40- and 89-yard touchdowns in the second quarter and scored on a 33-yarder in the fourth quarter.

ASU running back Eno Benjamin gave WSU trouble, too, rushing 19 times for 137 yards. The junior was untouched on a 32-yard touchdown in the third quarter that gave the Sun Devils their first lead, at 24-17.

Blake Mazza kicked a 31-yard field goal to make it 34-31 with 2:30 left, giving WSU’s restructured and supposedly rejuvenated defense a chance to display everything it’s worked on since Tracy Claeys surprisingly resigned during the bye week.

But the Cougars fell back into old habits, letting the Sun Devils notch four first downs, while Daniels completed six passes to set up his touchdown run.

“Well, we had them on the ropes and should’ve gotten them on the field, of course, on fourth down,” Leach said. “Then we let the quarterback loose. But, yeah, we just need to do our job. Everybody’s got their spot on the field and we need to do it.”