By Cindy Hval For The SpokesmaN-Review

For more information about Just One and a list of current programs, visit ifyoucouldsavejustone.org.

Approximately 1 in 3 youths in Spokane County has reported signs of depression, and youths of color are more likely to experience depression.

Such symptoms are related to increased likelihood for risky behaviors such as drinking, abusing drugs, carrying weapons and consideration of suicide, according to the Spokane Regional Health District’s Spokane County Community Needs Assessment 2017-2018.

What if you could save just one?

According to the National Center for Missing and Exploited Children, an estimated 800,000 children are reported missing each year in the United States – that’s approximately 2,000 per day.

What if you could save just one?

That’s the question Natalia Gutierrez asks herself each day. It’s also the name of the Hillyard nonprofit she launched in 2018.

“Two thousand kids reported missing each day – that stat struck home to me,” Gutierrez said. “My kid went missing when he was 14.” 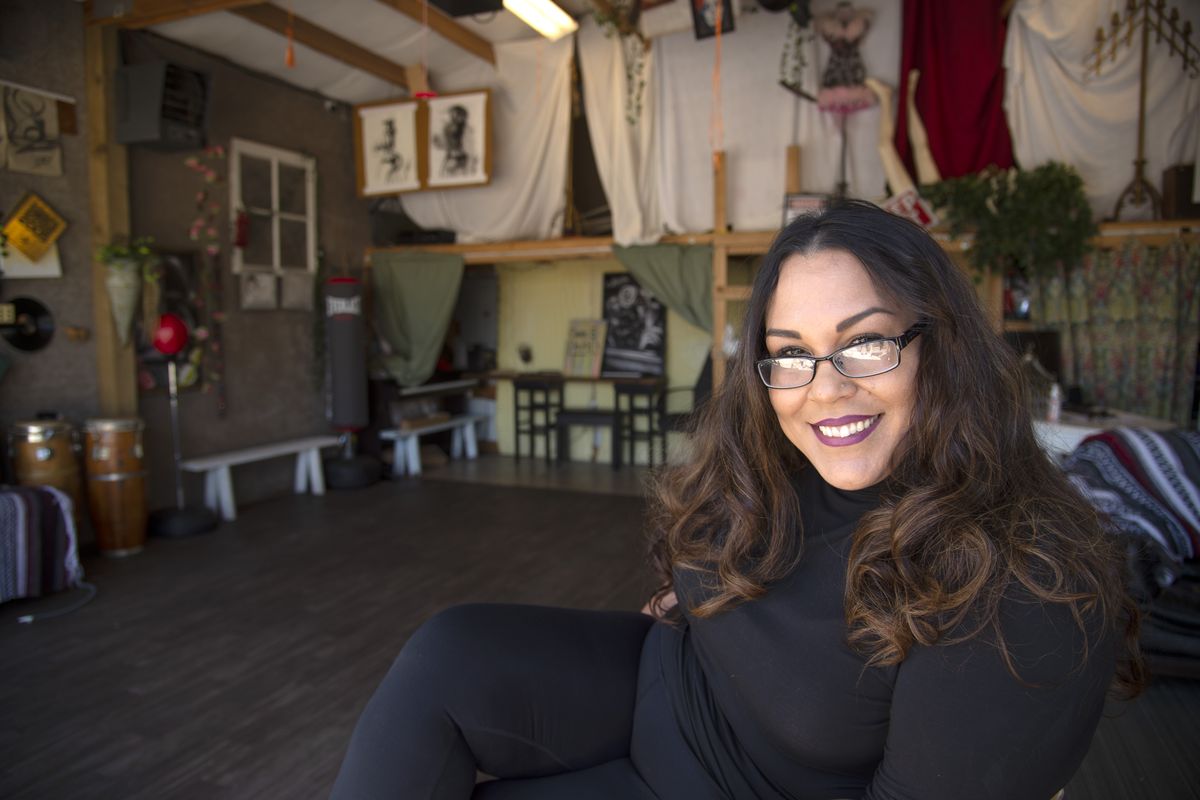 Natalia Gutierrez, founder of the nonprofit If You Could Save Just One, sits in their program space, an unused garage belonging to a local church, on Nevada Street in northwest Spokane, Friday, Aug. 14, 2020. The space will be used for after-school programs, like art, music and writing, for kids. (Jesse Tinsley/THE SPOKESMAN-REVIEW)

But long before her son left home, Gutierrez knew what it was like to be a kid who fell through the cracks. She was one of them.

“My mom overdosed on heroin when I was 3. I never knew my dad,” she recalled.

Her San Diego grandparents adopted her.

“When I was 12, my grandparents were murdered,” Gutierrez said.

She watched her grandfather take his last breath, but the killer/s were never apprehended, and the case remains unsolved.

“Our extended family of Italians and Mexicans split apart,” Gutierrez said. “It was really hard.”

Her older siblings scattered, and she ended up in foster care. When her foster parents’ son became sexually aggressive with her, she told them. He blamed her, and she was sent to a boarding school/correctional facility in Utah.

“It was supposed to be a six-month to one-year program, but I was there for two years,” she said. “No one came to visit me – there was no Christmas.”

Faced with that kind of loss and abandonment, it would have been easy to give up or lash out, but Gutierrez found another way to cope.

“You become your own family; you are your own support system.”

When her foster parents finally came to get her, she was almost 16.

“It was a bad situation,” she said. “I ended up running away.”

She said she looked for a place where she could find help for struggling teens like herself but found none.

“What resources are there for kids who are falling through the cracks?” she asked.

Eventually, she followed a boyfriend to Mississippi and had two children with him.

The relationship floundered, and when her brother heard she was couch-surfing in 2002, he encouraged her to come to Spokane where he had settled. So she did, finding work as a home-health aide and giving birth to her youngest child in 2005.

Her older son was diagnosed with ADHD and began struggling in middle school. At Rogers High School, Gutierrez watched as his grades plummeted from A’s and B’s to D’s and F’s. Frequent fights led to suspensions. She looked everywhere for help for him.

And then her son vanished.

“You can say runaway, but I don’t call it that. Not when they’re being trafficked by adults, or adults are hiding them,” Gutierrez said.

She began researching resources for kids, talking to probation officers, school officials and other parents. In doing so, she found many of the programs were not only difficult to find, but also to navigate.

“The only reason I started a nonprofit was to discover more resources for my son,” she said. “What are we supposed to do? Sit and wait? I can’t do that. I had to do something.”

When she learned how few activities were available for kids age 12 to 18 – especially if they’d been suspended from school – she decided to open a place to welcome them from 3-7 p.m. Monday through Friday.

“The afternoon is when kids get into trouble,” she explained.

Lidgerwood Presbyterian Church offered her the use of a building on Nevada Street, and she set to work planning activities that kids would enjoy: a music studio, karaoke machine, cosmetology instruction.

“Before COVID, kids were here every day,” Gutierrez said. “The music studio was so popular.”

But Just One is more than an after-school hangout. The nonprofit supports kids while also supporting families by working with parole officers, courts, schools and the child welfare systems.

Violence and trauma are identified community issues with major service gaps in Spokane. Many Just One clients are stuck in a cycle of abuse, neglect, mental health and systems of criminal justice, child welfare and educational discipline.

By focusing on activities the youths choose, they can get the benefits of extracurricular activities and mentorship and emerge as leaders, eventually instructing future classes.

Along the way, Gutierrez connected with a group of women who believed in her and in what she was trying to build.

Anna Belov came on board as an administrative assistant, and Mandy Chapman-Orozco offered to help with grants and sustainability.

“We’re looking for a new building,” Chapman-Orozco said. “We’d also like to partner with the school district administration in some way, and we’re always in need of mentors.”

The community has rallied, too. A breakdance floor was provided by Ziggy’s. Project Beauty Share donates makeup for cosmetology kits, and in the fall the United Way will support the creation of a community garden.

“I’m just crazy blessed,” Gutierrez said. “This was all almost like therapy for me.”

With the advent of COVID-19, Gutierrez switched gears and began turning activities into kits and delivering them to her clients. Just One offers cosmetology, gardening, fashion and arts and crafts kits that kids can request online.

Recently, Gutierrez delivered 29 kits to Family Promise, and Just One also offers online programs and activities. She continues to work with parole offices to find ways teens can do their community service.

“We clean up veterans’ yards, and I always bring music and snacks,” she said.

Gutierrez said she used to wonder when the “light at the end of the tunnel is going to shine for me.”

Now, she’s being that light for kids and parents who are stumbling in the dark.

“Six months after my son disappeared, he showed up at home all beaten up,” Gutierrez said.

When Gutierrez talked with her circle of women about how to measure success in a struggling kid’s life, someone mentioned high school graduation rates. That’s not how Gutierrez measures it.

“If they’re still alive, still kicking, to me that’s success,” she said. “When teens leave here, I tell them, ‘Stay alive.’ I listen to other mothers and I’m lucky. My kid came back – so many don’t.”