LAS VEGAS – Gonzaga head coach Mark Few has described his appreciation of Joel Ayayi’s short memory, noting his ability to move on quickly after a great play, or even a bad one.

Ayayi described his knack for delivering in crunch time as making the correct play for the team.

Ayayi made a string of giant plays in the final 4-plus minutes Monday night, carrying the top-seeded Bulldogs past No. 5 San Francisco 81-77 in the WCC Tournament semifinals at Orleans Arena.

With the game knotted at 69, Ayayi hit a runner in the lane and followed with a mid-range jumper. He added a pair of free throws and a left-handed layup in heavy traffic as the Zags went in front 78-72.

“I’m just trying to make the team play,” said Ayayi, who scored 12 of his 14 points in the closing half. “When the team needs me, I will answer.”

The Zags definitely needed Ayayi down the stretch. The Dons (22-12) have been a headache for Gonzaga in three meetings this season, this time using a combination of swift guards working off dribble penetration and a strong effort inside from Jimbo Lull until the 7-footer fouled out in the closing minutes.

“That’s kind of what he does,” guard Ryan Woolridge said of Ayayi, who had a big second half in GU’s win over Saint Mary’s in the regular-season finale. “When he gets going, he just keeps going.”

Gonzaga (30-2) reached the 30-win mark for the fourth consecutive season. The Zags moved into the tournament title game for the 23rd straight season by surviving another slugfest with the Dons.

“We’ve had some incredible streaks at Gonzaga. The NCAA (tournament streak of 21 straight seasons, soon to be 22) is probably the one we’re most proud of,” Few said. “The fact we can come down here and fight our tails off like we did, against a really good team that gave us their best shot and pushed us to the limit, we’ve had to do that numerous times down here, fully knowing we’re playing on after this.

Senior forward Killian Tillie shook off another injury – he tweaked his ankle in the second half – and produced a team-high 19 points and 10 rebounds on a night when center Filip Petrusev had some trouble finishing in the lane.

“We kept asking him if he was fine, and he was fine,” Few said of Tillie, who played 36-plus minutes. “We all can see that he hasn’t been 100% all year, but he’s shown what a game competitor he is, and how good a player he is. He had 19 and 10 on a bad ankle and some other things bothering him.”

Coming off a nine-day break between games, Gonzaga couldn’t have asked for a smoother start. The Zags essentially had a layup drill going in the first five minutes, piling up 14 close-range points to move in front 16-9.

The lead reached 21-9 after Woolridge’s 3-pointer, but the Dons tightened up defensively, and GU’s shooting percentage slowly dropped. USF tied the score at 25 with a 9-0 run produced by Lull, Khalil Shabazz and Remu Raitanen.

The Zags had an edge in nearly every statistic – including a 53% to 42.4% advantage in field-goal accuracy and a 28-16 margin in paint points – but couldn’t establish separation.

“We tried to come out with energy and effort,” said Woolridge, who finished with 16 points, 14 in the first half. “That’s what coach (Few) told us. That’s what we did.”

Minlend finished with 19 points, and Shabazz added 17 off the bench. Lull was effective inside with 13 points and five boards, but he played only 18 minutes.

After Ayayi’s two buckets put Gonzaga up 73-69, Lull missed from point-blank range and picked up his fifth foul going over Tillie’s back for the rebound.

The Dons went to a smaller lineup, prompting Gonzaga to do the same with Tillie at center and Corey Kispert at power forward. The Zags made five of six free throws in the final 1:53. USF was 2 of 5 at the foul line in the final 4:34. 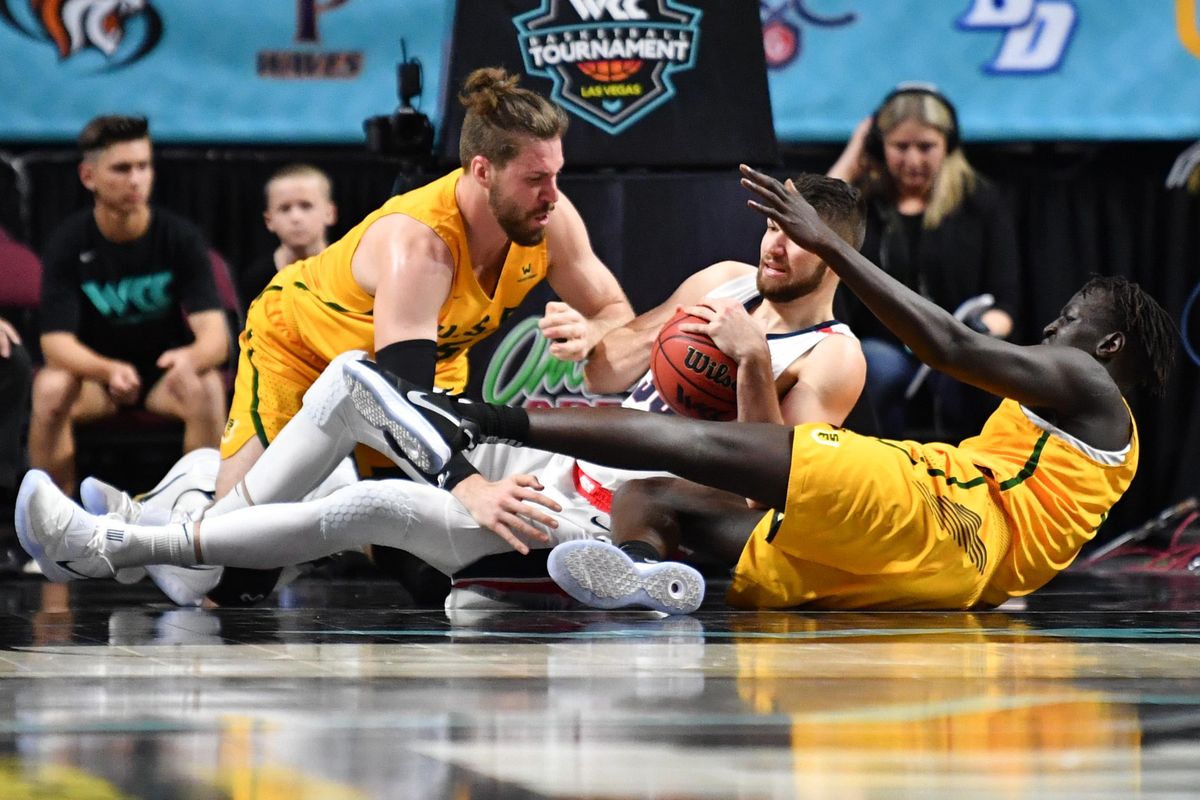 Gonzaga Bulldogs forward Killian Tillie (33) vies for a loose ball against the San Francisco Dons during the first half of a West Coast Conference semi-final basketball game on Monday, March 9, 2020, at The Orleans in Las Vegas, Nev. (Tyler Tjomsland / The Spokesman-Review)