“Somewhere on a Beach”

“Drunk on a Plane”

The song provided the sweetest moment of the night, as Evie held her own and impressed with her 45-year-old award-winning singer-songwriter father. It wasn’t the only Bentley child appearance of the evening, as son Knox Bentley, 7, served as “hype man” onstage dancing along to “Somewhere on a Beach.”

Bentley made a triumphant return to the stage shortly before 9 p.m. Friday, and his concert and stage attire – a red plaid shirt, black T-shirt, black jeans and backward ball cap – were, to quote the title of one of his hits, free and easy. The evening’s nearly 20-song setlist flowed naturally and was boosted by Bentley’s signature deep, raspy voice and natural charisma.

Bentley’s new tour, “Beers on Me,” officially kicks off Aug. 13, and he started Friday night with “Gone,” his latest song to reach No. 1 on the country music chart, making it the 20th chart-topper in his two-decade career.

Bentley’s new single, “Beers on Me” with Breland and Hardy, was released on Thursday, and he pulled audience member Kyle onstage during “Beers on Me” to shotgun two cans of beer, much to the crowd’s approval.

Audience favorite songs Friday night included “Free and Easy,” “Different for Girls,” “5-1-5-0,” “I Hold On,” “Sideways,” “What Was I Thinkin’ ” and the encore “Drunk on a Plane,” during which Bentley performed in a black pilot uniform. 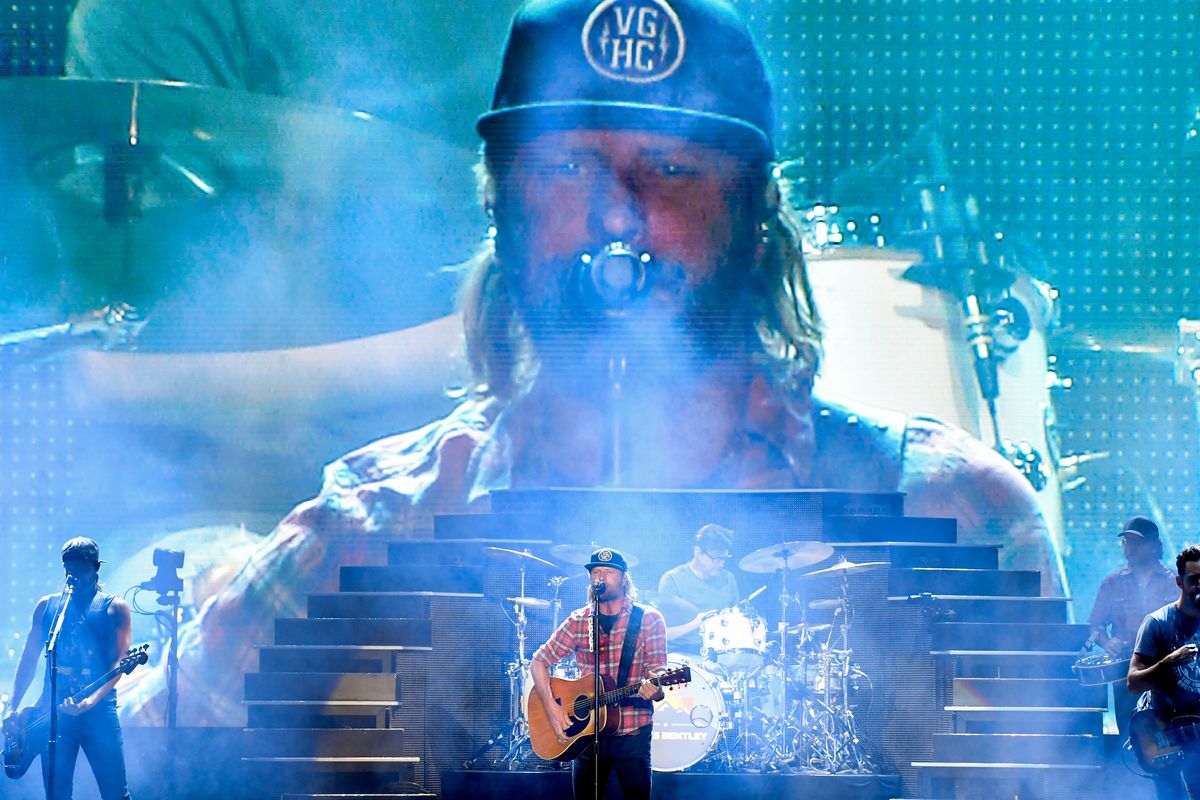 Before launching into “I Hold On,” Bentley talked about his old 1994 Chevy truck once owned by his late father and his old guitar. He talked about being a music fan, having autographs from Merle Haggard, George Strait and Garth Brooks and playing “What Was I Thinkin’ ” at state fairs when he started his career.

And it was a bonus night of music as Hot Country Knights, Bentley’s 1990s country parody band formed in 2015, took the stage after “Drunk on a Plane” in mullets, dad jeans and cheesy dance moves. Hot Country Knights is the alter egos of Bentley and his road band.

Breland, 26, a Black singer-songwriter and record producer of country-trap, R&B and soul from New Jersey, served as the opening act and impressed with his vocals, stage presence and talent. The newcomer won the crowd over by the time his set ended.

Bentley was the headliner of night 2 of the Watershed Country Music Festival at the Gorge Amphitheatre on Saturday night, and Breland made a surprise appearance at the late-night party led by Dee Jay Silver after Bentley’s concert ended.

Bentley continually raved about Breland onstage at Northern Quest and Watershed. An interview with Bentley was the 7 cover feature in The Spokesman-Review on Friday.