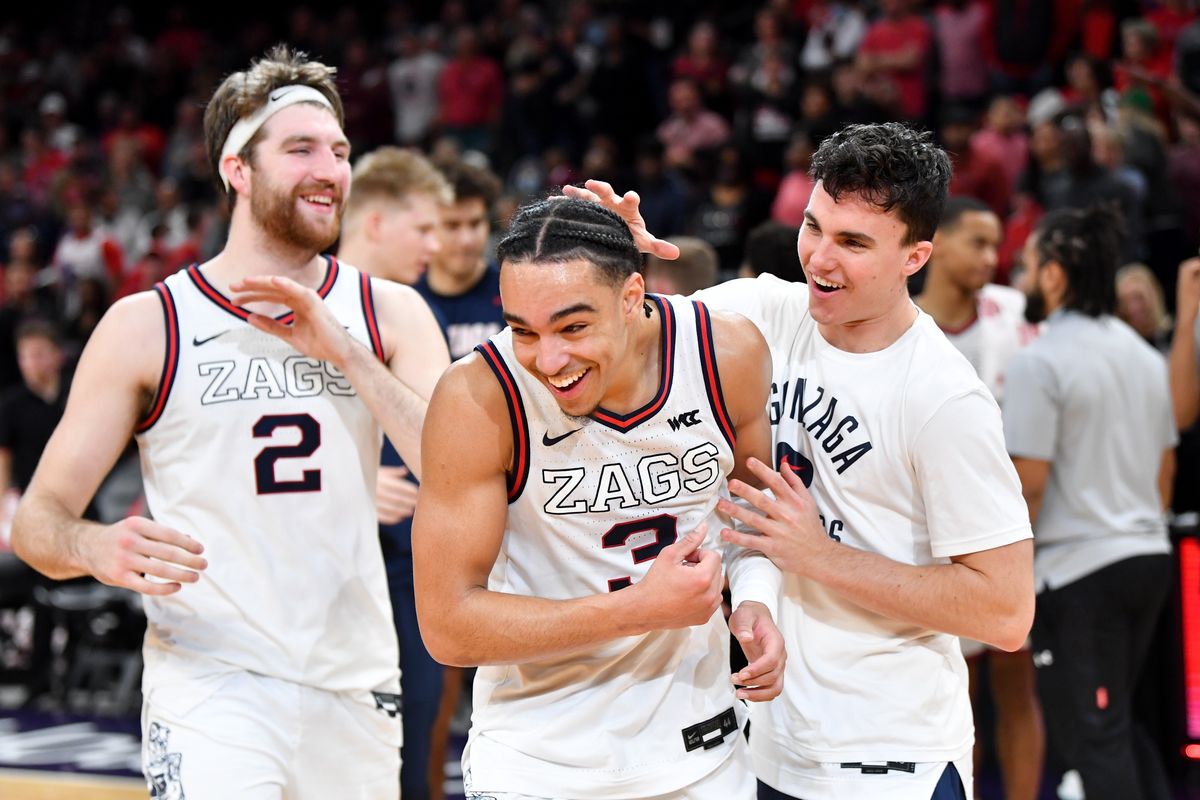 Gonzaga flipped the script on recent shooting woes, putting in its best perimeter performance of the season in a 69-55 win over Texas Tech in Phoenix.

The shooting surge came from Andrew Nembhard and Rasir Bolton, who combined for 31 points and 9-for-18 on 3-pointers. Nembhard hadn’t made a 3-pointer in four games, but converted 3 of 5 attempts in the second half, as the Zags pulled away for a convincing win.

Texas Tech was without its best player, Terrence Shannon Jr., who was sidelined with back spasms. Still, the Red Raiders battled early in the second half and cut the GU lead to two points with 14:18 remaining.

That was as close as Texas Tech would get.

The Bulldogs responded with back-to-back 3-pointers from Nembhard and Anton Watson – who played a key role off the bench with 10 points. The Zags extended that to a 15-4 run over the next four minutes.

GU has a short turnaround before Monday’s game against Northern Arizona in Spokane.

PHOENIX – Limiting Drew Timme’s production in the paint has become a massive undertaking for the majority of Gonzaga’s opponents the past two seasons. | Read more »

After several games on the outs with his 3-point shooting and taking care of the ball, Gonzaga’s senior point guard reunited with both aspects Saturday in a big way. The timing couldn’t have been better for the Zags, who rode a wave of 3-pointers past No. 25 Texas Tech 69-55. | Read more »

19:50 - GU 1, TTech 0: Timme gets inside and makes the first of two free throw attempts, as the second rattles out. Timme went into today’s game shooting 65.2% on free throws.

14:53 - GU 10, TTech 6: Santos-Silva is called for offensive three seconds for the Red Raiders before the first media timeout.

TTech is struggling from the field to open the game, shooting 2 of 8, while the Zags are 4 of 9. All five of GU’s misses have come on 3-pointers – shooting 1 of 6 – which has become a talking point over the last week, as the Bulldogs have struggled to find their shooting stroke.

Four scorers so far from the Zags led by Strawther’s six points. Timme, Nembhard and Holmgren each have three apiece.

Strawther hides in the corner as Holmgren waits for the backdoor cut.

Patience is the key here while Tech falls asleep on the backside. pic.twitter.com/Cxh0fw3Bl0

Six different Bulldogs have points. Chet Holmgren’s impact has been felt on defense closing out shooters, and has grabbed six of GU’s 12 rebounds.

4:42 - GU 26, TTech 18: A hectic series ends with Nadolny fouled by Sallis and the Red Raiders cutting into the Bulldog lead. Dunks and blocks on either end for TTech.

OH MY GOODNESS, DAVION WARREN WITH THE REJECTION 🚫 @TexasTechMBB pic.twitter.com/77AHbhuOFB

2:03 - GU 31, TTech 22: Watson gets a steal playing a key role off the bench at the final media timeout of the half. Watson with five points, three rebounds and two steals in 12 minutes.

Bolton up to a team-high nine points on 3-for-6 shooting on 3-poiners.

The Bulldogs played well in the first half, limiting its turnovers to four, contesting shots and shooting 6 of 17 on 3-pointers – an uptick of 7% from the past three games.

TTech holds a 21-17 advantage on rebounds, which has been its strongpoint thus far. Kevin McCullar is leading the Red Raiders with eight points and six rebounds. The score may also be different if TTech’s best player – Terrence Shannon Jr. – was able to play, as he is sidelined with back spasms.

GU will need to keep working the ball to Bolton and Strawther in the second half, who’ve combined for half of the Zags’ points. Timme has been ineffective, as the Red Raider defense is switching to a double-team when he gets the ball.

Timme opens the period with a layup, before the Red Raiders trade a pair of 3-pointers with Bolton, who is now 5 of 10 from deep with a team-high 15 points.

15:50 - GU 42, TTech 33: McCullar is called for a flop warning under the basket, as contact is initiated by Nembhard, who then missed the open mid-range jumper.

12:56 - GU 48, TTech 42: The Zags answer with back-to-back 3-pointers from Nembhard and Watson. Batcho gets a bucket back for the Red Raiders, who then call a timeout.

Watson has been huge for the Zags off the bench, with 10 points, three rebounds and two steals – shooting 3 of 3 from the field. Bolton still leads with a team-high 15 points and seven Bulldogs have scored. Only Bolton and Watson are in double-figures.

The Bulldogs have flipped the script on their shooting slump in recent games, making 6 of 11 3-pointers in the second half. Bolton and Watson still the only two Zags in double digits, but Strawther and Nembhard have nine apiece, while Timme and Hickman have seven apiece.

Hickman with the soft kiss off the glass with his offhand pic.twitter.com/Yy5ElhyxIt

3:50 - GU 67, TTech 51: Not much left to do for the Zags at the final media timeout. Bulldog perimiter has been the story, surging in the second half, after struggling the past three games.

GU looks like a different team when its effective on 3-pointers. Bolton and Nembhard have done a majority of the damage from deep, combining for 9-for-18.

Gonzaga players stood and watched as Texas Tech cut down the Final Four nets the last time these teams met in 2019.

The game will be hosted in Phoenix, Arizona, as part of the Jerry Colangelo Classic.

The Zags had an eight day break after a 80-55 win over Merrimack due to its game against Washington being canceled as the Huskies dealt with COVID-19 concerns. GU has cooled off from its hot start the past five games, losing a closely to Duke in Las Vegas, looking sluggish against Tarleton State and falling to Alabama in Seattle.

Texas Tech has climbed into the AP Poll for the first time this season, after beating then-No.13 Tennessee 57-52 in overtime. The Red Raiders last beat Arkansas State 75-62 on Tuesday. Its other six wins have come against thwarted mid-majors with a combined 11-54 record.

GU and Texas Tech have played three times, with the Red Raiders winning all three.

Most recently, the Zags fell 75-69 in the NCAA Tournament West Region Final, as Rui Hachimura’s 22 points and Brandon Clarke’s 18 point, 12 rebound performances weren’t enough to lift the Bulldogs into the semifinal. TTech went on to beat Michigan State 61-51, before losing to Virginia 85-77 in the championship.

The Red Raiders also beat GU in the Round of 32 during the 2005 NCAA Tournament 71-69. Ronald Ross made a go-ahead 3-pointer with 7.5 seconds remaining to sink the 3rd-seeded Zags.

During an eight-day layoff, Gonzaga players and coaches worked hard to curb the turnover issues that have popped up far too often for a team with the Bulldogs’ standards and aspirations. | Read more »

Terrence Shannon Jr. may be on Texas Tech’s injury report come Saturday, but until the Red Raiders provide more definitive news on the status of the junior guard, he’ll also have a place at the top of Gonzaga’s scouting report ahead of the Jerry Colangelo Classic in Phoenix. | Read more »

Transfers have dotted Gonzaga rosters throughout its two-decades-plus streak of NCAA Tournament appearances. So it comes as little surprise that four former Zags were on ESPN’s list of the 20 greatest transfers, compiled by John Gasaway. | Read more »