What began with casual FaceTime calls from the North Pole has become a way to add cheer to the holidays at Providence Sacred Medical Center.

Ed Kelly last year went through what most of us also experienced – not seeing friends and family as often. It was the end of 2020. Coronavirus cases peaked, becoming the worst wave at that time.

Kelly’s first and only grandson was born around that time, when Santa visits were 6 feet apart. Kelly and his wife, Kim, felt the newborn would miss some of those memories.

Kim Kelly had an idea.

“She goes, ‘I guess you need to grow your beard out,’ ” Kelly said. 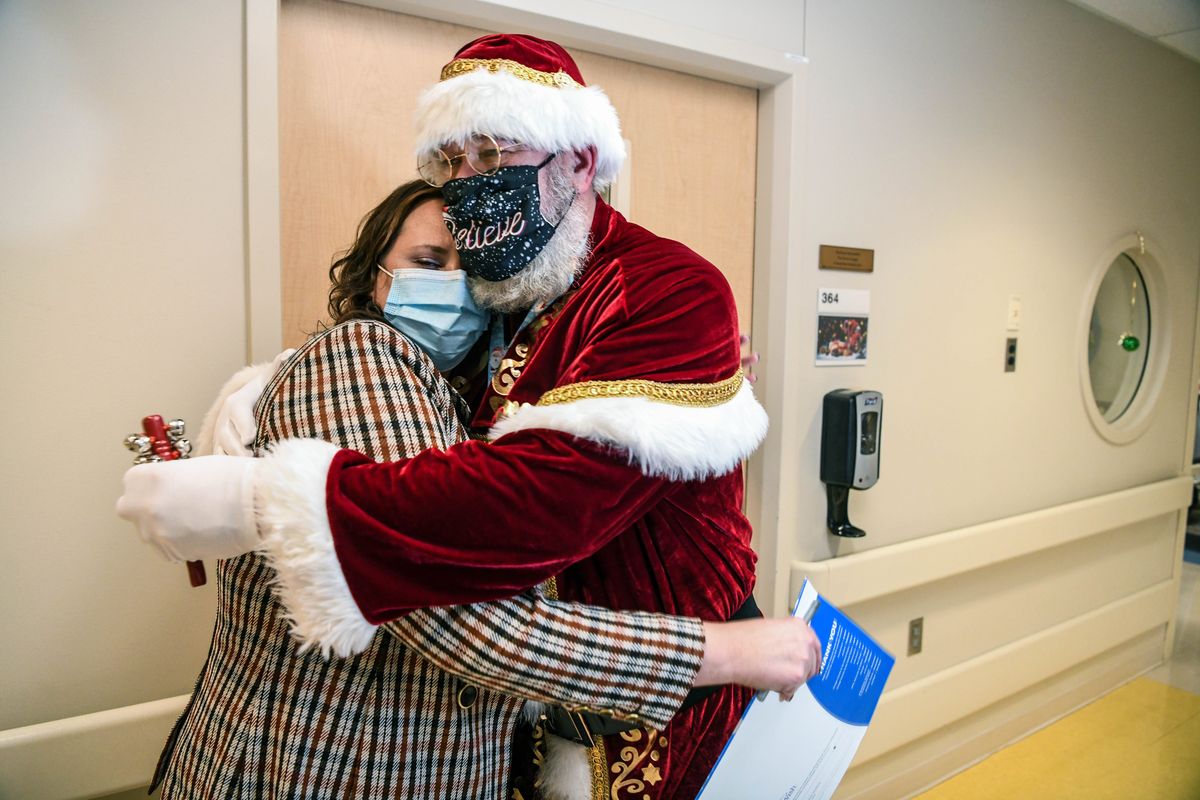 They stitched together a red suit trimmed with white fur and accessorized with a black belt. Kelly, who had been sporting a goatee, grew out his beard. Kim got a hold of some parents within their social circles who asked if Kelly would like to play as Santa on a video call with their kids.

It was an instant hit, he said.

“Just through word of mouth, people heard about it,” Kelly said.

When August rolled around this year, Ed and Kim Kelly both got the COVID-19 vaccine, which opened them to the possibility of in-person visits.

Kelly started at Providence nearly three decades ago and works as an environmental services assistant manager.

The hospital got him a badge with the name “Santa Claus” on it, which he takes while strolling through hospital wards to visit patients. He has mostly interacted with children, but said adults also get comfort from the familiarity of a holiday figure.

“The last couple years, it’s been tough for everybody, but especially for people here in health care,” Kelly said. “Our nurses, our doctors, our techs, all of my staff at environmental services, they’re all working so hard. And to see somebody smile just for a moment, just to have one second to breathe is worth it. … I have worn the suit where adults have seen me and they just smile. And it’s even though they know it’s not real. It just brings a joy to them. Just for a couple minutes.”

Kelly does it for free, he said, adding money was never the point.

The video calls are one-on-one with the child and their parents, who Kelly said they usually know from their social circle. In preparation Kelly will speak to the parents to learn more about the child and which traditions the family follows.

“We know if they leave out milk and cookies, we know beforehand what the kids are asking for. We know they’ve been good – obviously,” Kelly said. “We can kind of personalize it while we’re doing the video calls. I say something like, ‘Oh I’ve got to watch out for Salazar, your cat, because last year I almost stepped on his tail.’ And their eyes light up. They’re like, how does he know my cat? He must be using magic.”