“You just stepped into an alternate reality,” Mariah McKay told a recent visitor to Haystack Heights, a cohousing community nearing completion in the South Perry district.

That alternate reality spans almost 3 acres and comprises much of a large square block between 8th and Hartson avenues and Garfield and Arthur streets. That’s where McKay and her husband, Jim Dawson, have led a four-year effort to create a 39-unit cohousing community that will be home to 65 adults and 12 kids by the end of the year.

Already, though, the community’s first members have moved in, occupying five apartments in the Haystack Building, which the property’s previous owners designed, built and initially operated as a yoga studio.

The rest of the residents will occupy a trio of new buildings on the topographically varied piece of land, which is marked by the basalt formations that give the community its name.

Contractors recently completed work on two of those buildings, both three stories tall and subdivided into condominiums, on the north end of the property.

Construction crews are now working on a third residential building, which will include 14 units, on an elevated platform over what will be a parking garage on the east side of the parcel.

And work is wrapping up on a fourth building that will be the literal and, according to McKay, figurative centerpiece of Haystack Heights: the common house.

There, she said, residents as well as invited guests will come together for meals and other occasions to forge the bonds of a collaborative, efficient and intentional living environment.

Nancy Musgrove, a retired environmental consultant, lives across the street from Haystack Heights and has been instrumental in making it a reality.

“The big-deal kind of idea underpinning it is sharing,” Musgrove said.

McKay was quick to add, though, that such sharing is entirely voluntary, with members owning their own units, choosing to contribute as they wish and deciding things collectively.

“Everybody has an equal voice in the decisions that get made,” Musgrove said.

While McKay said the plan is to “formalize a friends-of program” for people who want to contribute without living in the community, Musgrove is among those already pitching in to the community without buying in.

“Nancy and I donate all of our time to cohousing,” McKay said.

While that may be somewhat of an overstatement – McKay and her husband also own and lease a number of co-living homes, where people rent rooms and share common spaces, as well as work full-time for nonprofits – they and other future members of Haystack Heights have contributed thousands of volunteer hours to the complex task of building a multifamily development that’s unprecedented in the Inland Northwest.

Nationwide, however, more than 165 cohousing communities are in operation, with another 140 in planning stages, according to the Cohousing Association of the United States.

And interest in communal living is on the rise, with a number of for-profit and nonprofit entities seeking to provide more affordable, sustainable and connected alternatives in a housing market where prices have skyrocketed and society where personal connections are increasingly hard to make.

But though shared arrangements have the potential to increase efficiencies and reduce redundancies, it can still be a challenge to make them attainable for those with low incomes.

As the cost of Haystack Heights grew to $14 million, some interested parties have dropped out of the project due to the investment required. McKay said there have been “exoduses when things get real” – namely, when more money was needed.

Despite the turnover, the project has presold all 65 units for prices ranging from $260,000, for a one-bedroom condominium, to $450,000, for a four-bedroom townhome.

And she said the costs could have been even higher.

McKay said an expected 20% increase in construction costs was built-in when they priced the units in 2019. Since then, however, prices climbed even higher, to 40%, she said. Despite that, those prices remained fixed.

To make the project pencil out, the design has been modified, with one planned building completely nixed in favor of adding one floor and five units to the two completed residential buildings.

McKay said Haystack Heights looked into the possibility of acquiring state housing grants to increase the community’s economic diversity, but she said they were “not even close” to qualifying because the cohousing model didn’t fit the program requirements.

That model allows for private ownership of residences while relying on communal decision-making and promoting shared space.

As McKay and Musgrove walked the grounds on a recent afternoon, they unspooled an expansive vision of that space .

They ascended the stone steps of a “fairy trail” to an upper garden terrace where they hope to have live music and birthday parties. They pointed out the quince, kiwis and table grapes growing in a fruit garden. They noted the pollinators buzzing around a perennial garden. They showed off a planned space for teenagers, as well as a music room for community jam sessions. They described plans for a tool shed they intend to convert into a potting shed. They raised the idea of harvesting tilapia as part of an aquaculture project. They pointed out the meeting space, laundry area and guest rooms of the common building.

And they emphasized that they are building on the foundation laid on the land over more than a century, beginning with the construction of a large home on Eighth Avenue in the late 1800s.

McKay and Dawson bought that house, as well as the acre it sat on, from a pair of artists and artisans who had cultivated the terraced gardens in back and who included a 102-page purchase-and-sale agreement when McKay and her husband bought the property.

“A typical developer never would have signed on,” McKay said.

But McKay and her husband pushed in all their chips. They “zeroed out” their accounts, refinanced their other properties and invested their savings to buy the house.

After converting it into a co-living space for six residents, they split off two-thirds of an acre from the existing house for the cohousing community, keeping one-third for the co-living home.

They then joined with other members of the planned cohousing community to buy from the same couple the Haystack Building, formerly home to a yoga studio, and the adjacent 2 acres it sat on.

That land was zoned multifamily, which opened the door for the kind of development McKay and her fellow member-directors envisioned.

And now, as the project nears completion, they have begun thinking about how to expand their reach beyond the bounds of the Haystack Heights property.

“We would like to become kind of a core part of the neighborhood,” Musgrove said. “We don’t want the community to end at our fence.” 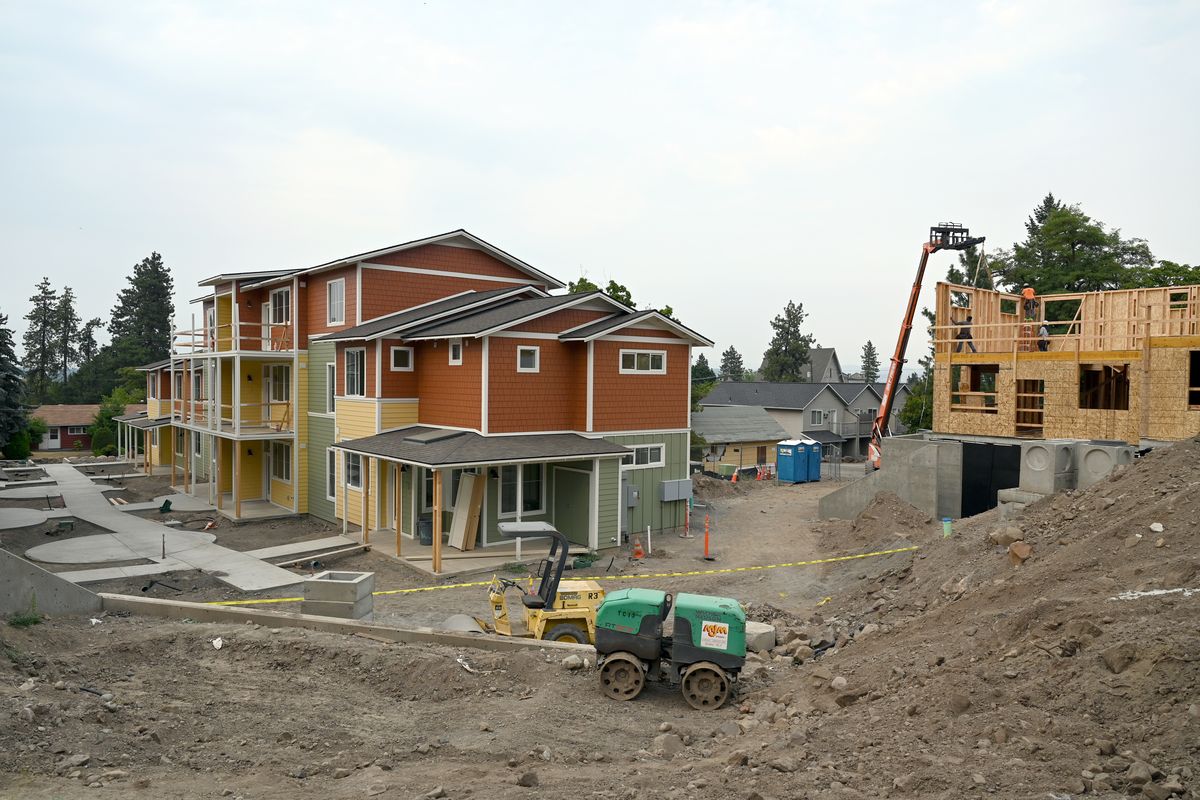 They are planning a grand opening of the common house in August, and McKay said the public will be invited.