There are no guarantees in college basketball, but Gonzaga winning a West Coast Conference Tournament semifinal game is about as close as it gets.

Another near certainty this season: The Bulldogs’ offense is going to put up numbers and generate at least a couple of game-changing stretches.

Those things were on display Monday night as top-ranked Gonzaga thumped rival Saint Mary’s for the third time this season, the latest a decisive 78-55 win at Orleans Arena in Las Vegas.

The Zags (25-0) moved into the championship game for 24th straight season, the longest active streak in the nation. They improved to 27-2 in semifinal contests.

GU actually had one of its lowest scoring totals of the season, but the offense put its stamp on the outcome long before letting up on the gas pedal in the final 13 minutes.

By then, the Zags had constructed a 30-point lead and they were flirting with another 60% shooting night. They cooled off with just 14 points in the final 13 minutes and still finished at 53.2% from the field.

Drew Timme mirrored the team offensively, doing most of his damage in the opening half with 15 points and three assists. He made his first seven shots before missing one in the closing seconds of the half.

The 6-foot-10 forward’s post moves were too much for the Gaels’ slower post defenders. On one memorable play, Timme grabbed a rebound, dribbled downcourt and fired a nifty bounce pass to Joel Ayayi for a layup, putting Gonzaga up 25-13.

“He’s been great all year,” Gonzaga coach Mark Few said. “That’s why he’s an All-American candidate and up for player of the year. He’s a heck of a player. I’m on his ass a lot, but I probably don’t tell him enough just how good he is. Some of us just have that lot in life and that role. He’s a joy to coach.”

Timme finished with 18 points and eight boards. Ayayi and Jalen Suggs both made 7 of 9 shots and combined for 31 points. Corey Kispert added 14 points and Andrew Nembhard had 10.

“It’s just the flow of the game, that’s what’s so great about this team and the style of play,” Timme said. “None of the guys care who scores. All we care about is winning. It starts at the top with coach and the system making sure everybody gets involved. It really could be anybody.”

Gonzaga shot 64% in the opening half and took control with bookend runs. The Zags ripped off 11 unanswered points after Saint Mary’s scored on its opening possession. Gonzaga rattled off eight points in a row to make it 44-24 late in the half. 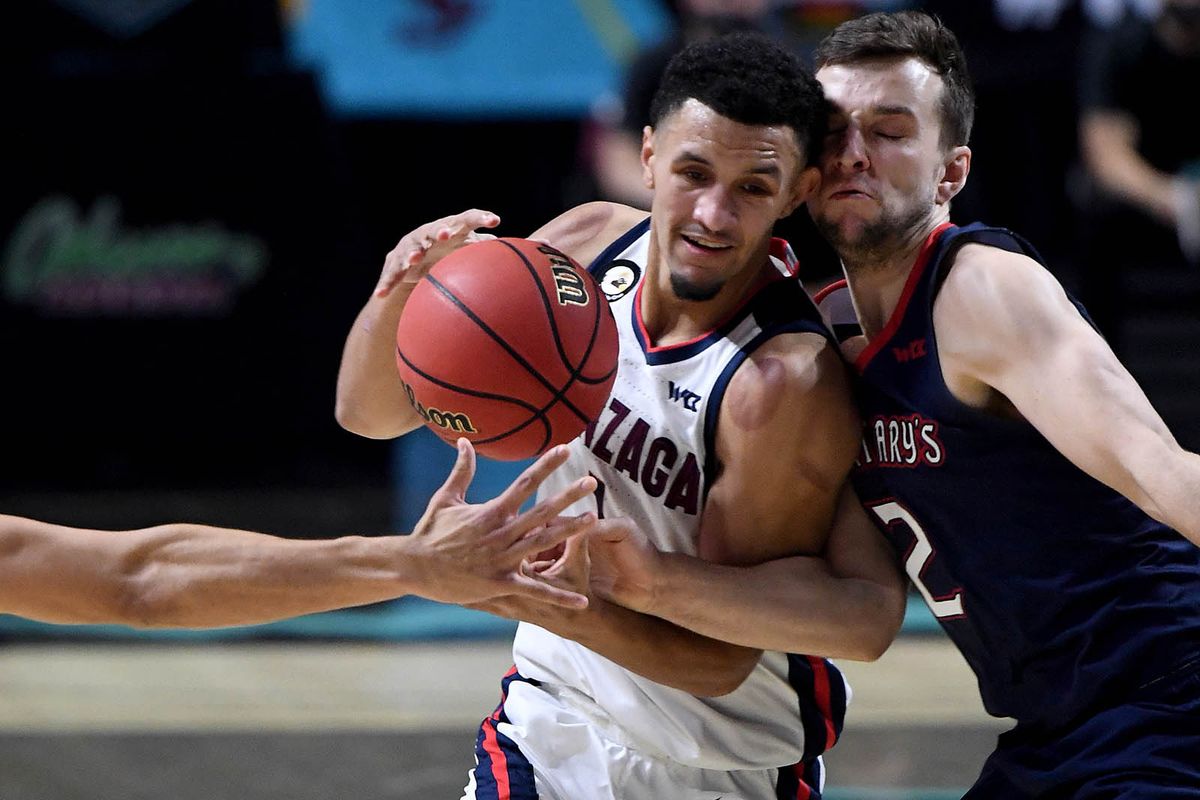 “We just have to have an A game to play them close and we didn’t,” Saint Mary’s coach Randy Bennett said. “We shot the ball bad. You’re not going to beat them 58-55. They’re going to get 75 on the board. We have to find 70, 75 points to hang in the game with them.

“They’re a bad matchup for us that way. They guard and they’re going to score. They’re the best offensive team in the country and I haven’t seen anyone that’s really close.”

And that’s from a coach that’s limited Gonzaga to 73 and 78 points, two of the Zags’ three lowest scoring outputs this season. Monday marked just the third time Gonzaga has been held under 80 points, but it was more than enough with the defensive effort against an opponent that has had trouble scoring all season.

Fourth-seeded Saint Mary’s (14-9) made just 36% from the field, including a frosty 2 of 20 showing from deep. Guards Logan Johnson and Tommy Kuhse combined for 28 of the team’s 55 points, but made only 10 of 31 field-goal attempts.

“Defensively, that’s what we really pride ourselves on this year,” Kuhse said. “They’re just a tough team to stop for 40 minutes. We’ve been able to do it in stretches but we haven’t been able to put a whole game together. Obviously offensively it’s tough to score on them as well.”

Gonzaga equaled the 2017 team for the longest winning streak in program history with 29, dating back to last season.