Fierce winds buffeted the woods near Cheney on April 18.

The gusts whooshed through the trees, rocking them back and forth and knocking a great horned owl nest out of its tree.

Most of the time getting blown out of a tree spells doom for a fluffy baby owl left stranded on the ground.

But this time, a local landowner spotted a gray fluffball with fearsome yellow eyes and made some calls. The property owner called Turnbull National Wildlife Refuge, which suggested they contact volunteer raptor rescuer Tina Penny.

Penny, who volunteers with West Valley Outdoor Learning Center and Birds of Prey Northwest, knew exactly what to do. She’s trained in handling hawks and owls and has saved about 25 raptors in the last couple of years. 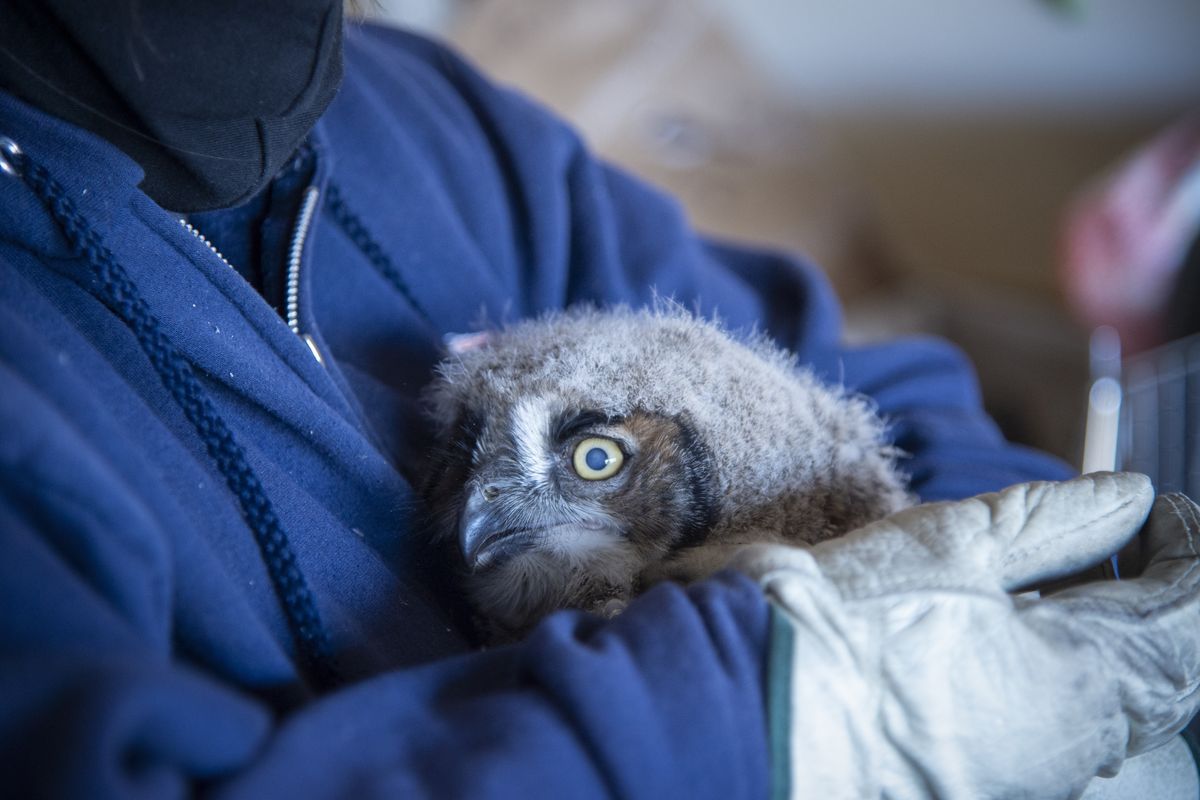 Tina Penny, a volunteer with Birds of Prey Northwest, holds a month-old baby great horned owl that she is caring for until she can return it to an adult owl’s nest. Photographed Wednesday, April 28, 2021 at Penny’s home on the West Plains of Spokane. (Jesse Tinsley/The Spokesman-Review)

She took the owlet to her house for a few days and fed it mice – lots of mice, about 10 per day. Then she built a makeshift replacement nest out of a laundry basket and pine boughs.

Next, Penny returned to the spot where the owlet had been blown from its tree. She played some great horned owl calls to see if the mother owl was still in the area. The mother flew from her hidden perch, so Penny knew the replacement nest could work.

The following day – Earth Day, April 22 – Penny returned to the nest site. She leaned a ladder up against a suitable tree, climbed up high and secured the laundry basket nest with a ratchet strap.

She set up a game camera to monitor the nest, left the owlet in the basket with two mice to tide it over, and left.

When she came back the next day to check on the baby bird, the mother owl was on the laundry basket. The rescue operation was a success.

That’s because great horned owls don’t build sturdy nests. They usually don’t build their own nests at all, opting instead for old nests made by other species, especially red-tailed hawks.

Great horned owls tend not to renovate those adopted nests much, so the construction can be relatively fragile. The nests simply aren’t good at withstanding strong winds.

“They don’t steal (nests) in the most desirable areas,” Penny said. “The wind storms are just wreaking havoc.”

The laundry basket nest could also save the life of another baby great horned owl rescued in Idaho by Birds of Prey Northwest.

On Wednesday, Penny took the Idaho owlet and placed it in the nest near Cheney. It wasn’t a smooth operation, because the great horned owl parents – both the mother and father owl help raise the young – mobbed her in an effort to scare her off. Penny wore goggles to ensure the birds couldn’t claw her eyes.

Eventually though, she got the owlet from Idaho into the laundry basket nest. Great horned owls – and most birds – are bad at distinguishing between their own offspring and an unrelated nestling, so the parents likely will feed the Idaho bird as if it were their own.

Penny said that even well-meaning folks shouldn’t try to handle raptors if they’re not trained. If you come across an animal in need of help, you can visit Animal Help Now’s website to find a rescuer at https://ahnow.org/#/.