A GRIP ON SPORTS • There are a lot of ways the Spokane area is among the nation’s best. Downtown park by a river with spectacular waterfalls? Check. World-class fluffy powder at the local ski resorts? Check. Girls’ high school hoops? Check. 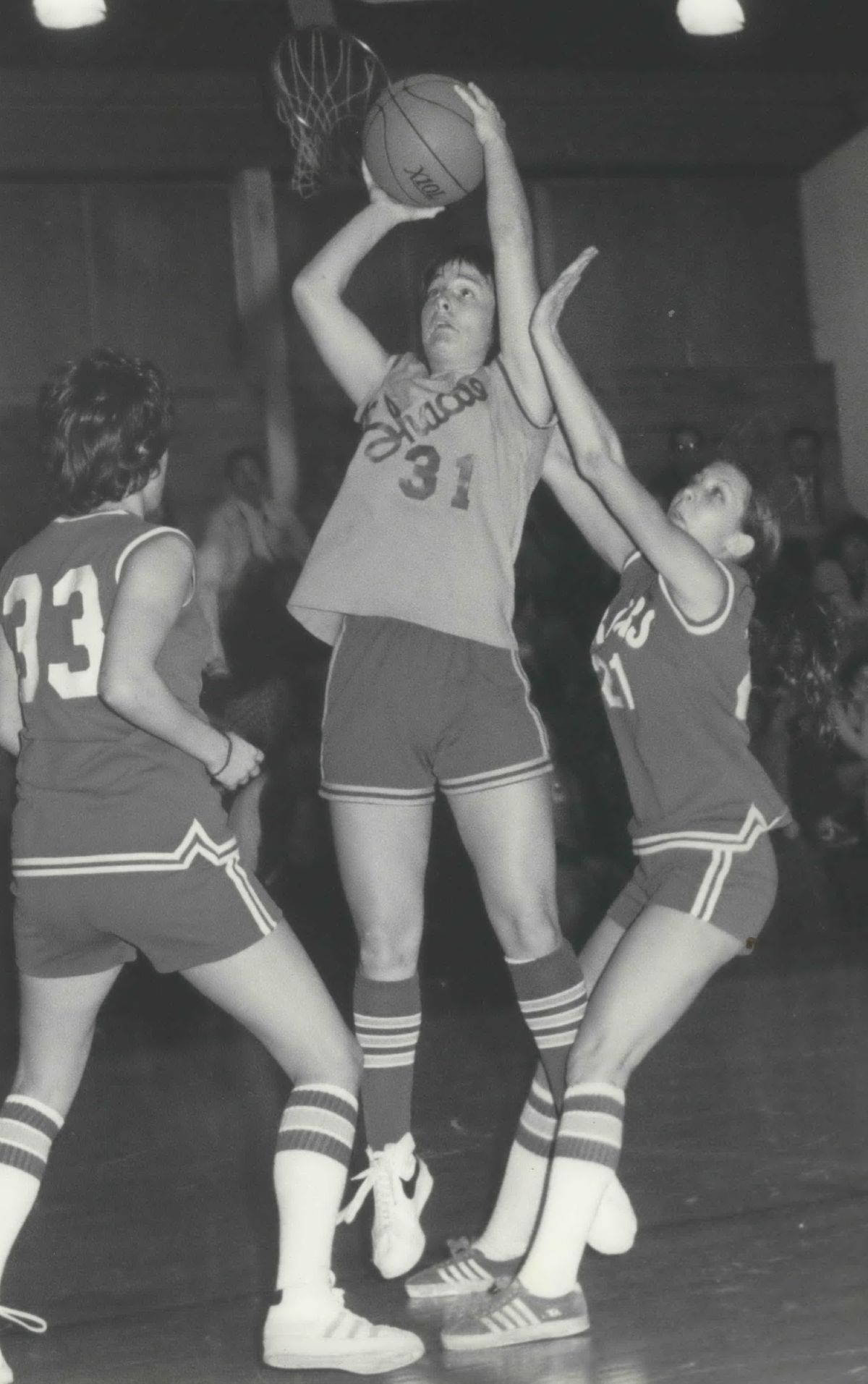 • Of those three attributes, the last might be the most surprising, right up there with the local Catholic university becoming a national power in the same sport. Hooptown USA indeed. The girls’ high school basketball played in this area is as good as it gets – not just in the state but throughout the nation.

And it has been that way for years.

Late last summer, retired Spokesman-Review sports writer Dave Trimmer took me aside at a retirement party – we attend many of those these days – and wondered if I would be willing to help on a project he had in mind.

He wanted to mine the history of girls’ high school hoops in the Spokane area, concentrating on the dominance of the state’s highest classification. The vein of ore is a deep one and it would take more than one person to assay its worth.

In a moment of weakness, I said yes. 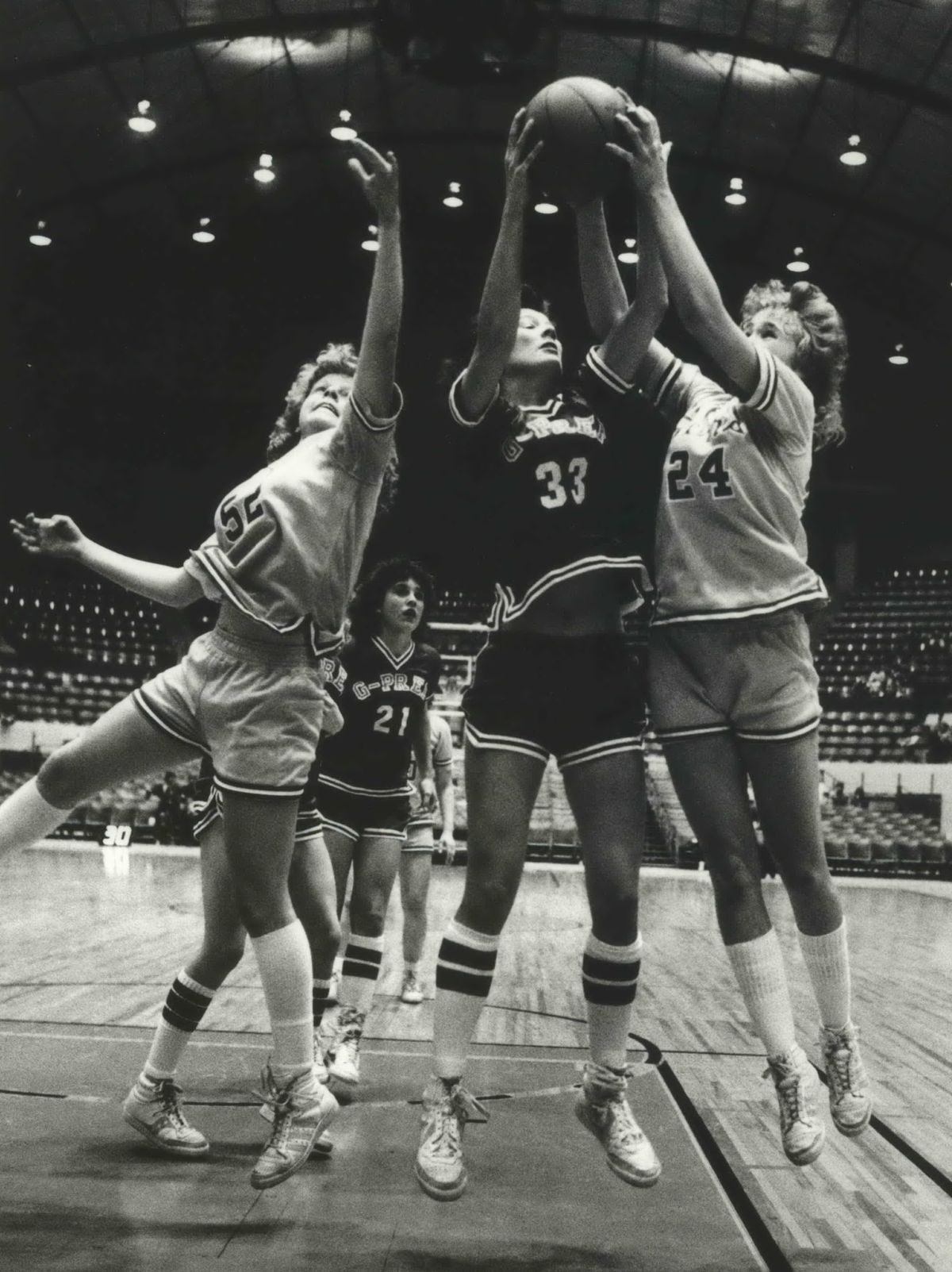 What Dave put together begins running in the S-R today, starting with David Oriard’s piece on the early days of GSL girls’ hoops. David knows that era well as his sister Lisa was one of the stars.

Our contributions will come later. We were involved deeply back in the early part of this century, during a short period when we served as the S-R’s associate sports editor in charge of prep sports. We covered quite a few State 4A tournaments back then and got to watch first hand State tournament runs from Lewis and Clark, University, Mead and Central Valley.

But don’t have any illusions. This series, which will run through a weekend devoid of Washington State and Seattle Seahawk football games, is Dave Trimmer’s progeny. He did all the heavy lifting, including keeping other retired sports writers focused and engaged – instead of napping. He also wrote most of the words, covered most of the years and supplied most of the context.

Those of us who had a part in this series hope you enjoy it. And understand how good the basketball played in this area really is.

• One of the best parts of college sports is that every year someone new emerges into the spotlight. Every year. 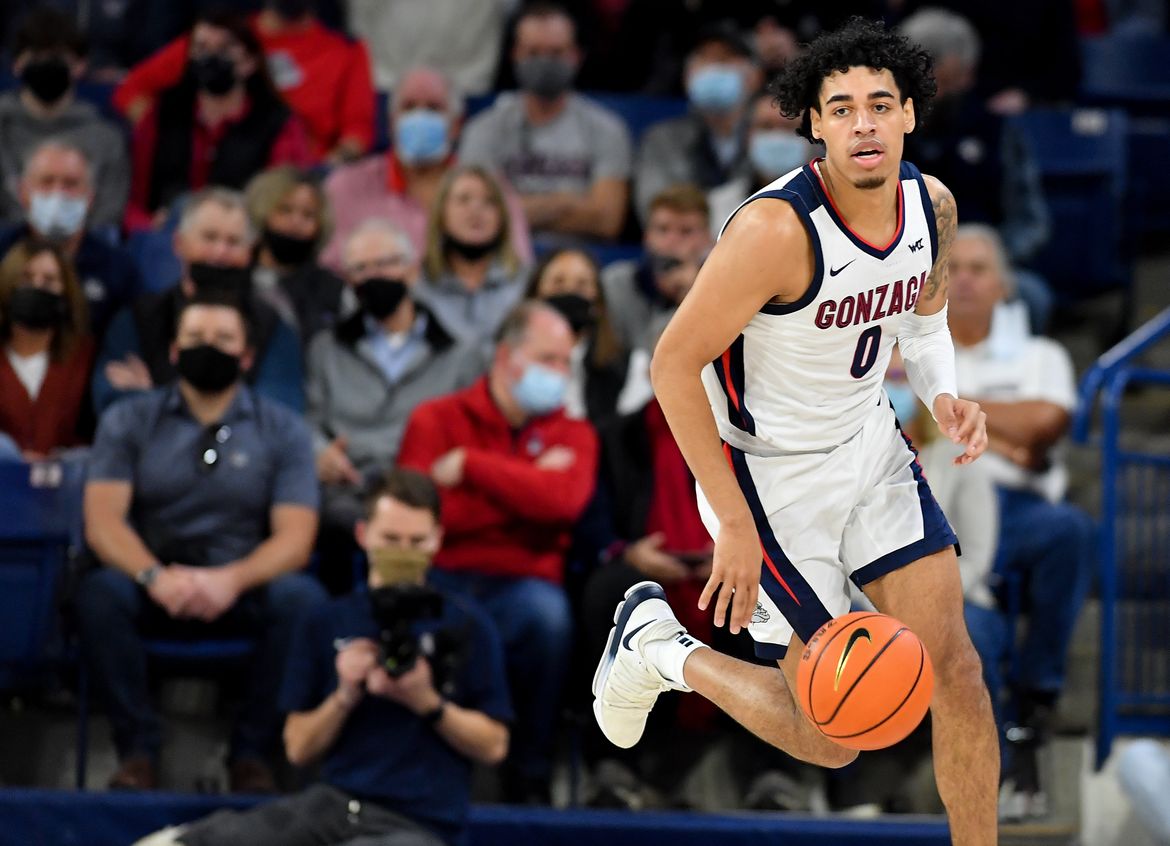 Take Gonzaga hoops this season. Julian Strawther played limited minutes in the NCAA title-game run last year. Part of the reason was he was playing the same spot as Corey Kispert, an NBA lottery pick. The other aspect was youth. It was his first year on campus and the rotation was tough to crack.

But we believe Strawther is going to play a big role for the Zags this season. He’ll get every opportunity to eat up most of the minutes Kispert received last year. At 6-foot-7, long and quick, he has a presence on both ends. And if he can be prolific shooting beyond the arc, an already potent Bulldog offense becomes even more so.

Down the road in Pullman, the same thing is happening on the football field. Ron Stone Jr. was an unknown entity when the season began. Now? He is one of the best edge rushers in the Pac-12. His play last week at Arizona State earned him the conference’s defensive lineman of the week award. But that was just icing. The cake has been his play all season. He’s second in the Pac-12 in tackles for loss (10.5) and third in sacks (5.5). And, remember, the conference includes Oregon defensive end Kayvon Thibodeaux, who may be the NFL’s top draft pick come spring.

We can remember bits and pieces of Stone’s play during the COVID-19-shortened season of 2020 but not all that much. This year, he’s done many things that are hard to forget. 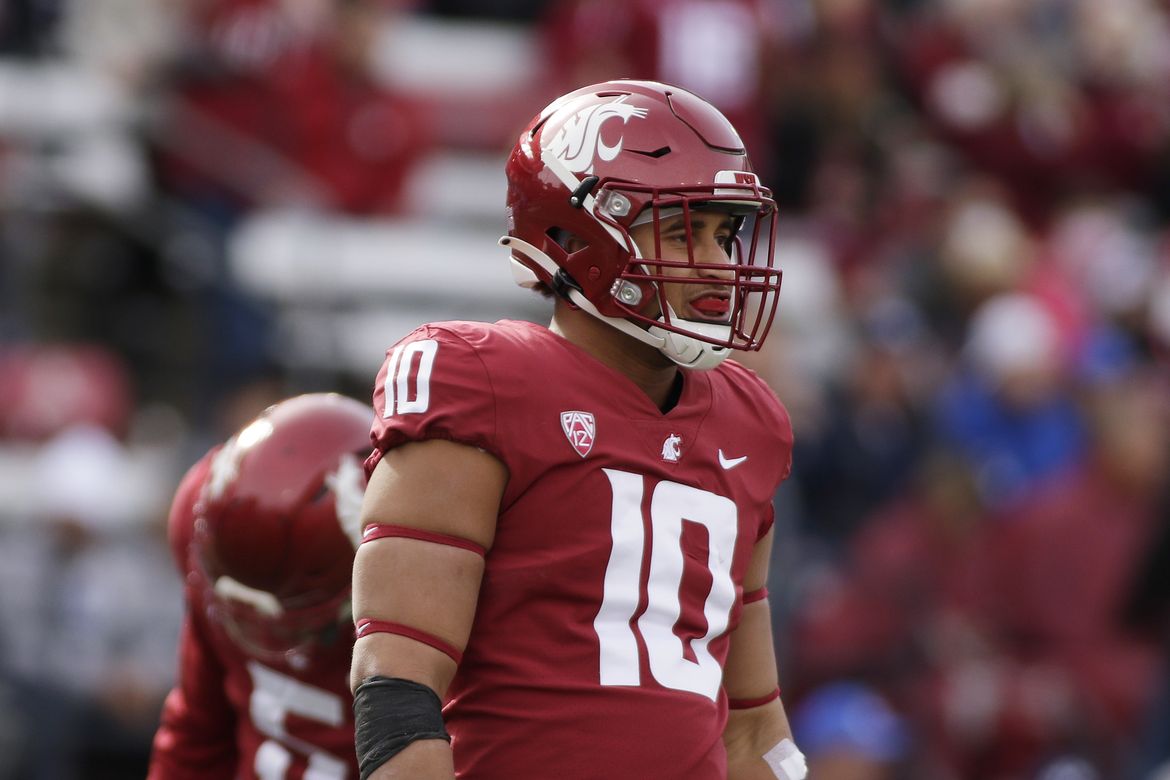 WSU: Of course Colton Clark has a story on Stone’s award and the performance that led to it. … The Cougars are in their bye week, waiting until they play at seventh-ranked Oregon on Nov. 13. Colton tells us that game will begin at 7:30 p.m. and be broadcast on ESPN. Depending on what happens in Seattle this Saturday, the contest could be for the solo North division lead. … Que Johnson was one of the bright spots of the late Ken Bone era in Pullman. He’s back in the area, serving as a basketball assistant at Eastern Oregon University. Theo Lawson caught up with him after the Mountaineers played at Gonzaga on Sunday. … A couple of WSU players, Charlisse Leger-Walker and Bella Murekatete, along with former Central Valley star Lexie Hull, are on major award lists. That news is part of our local briefs column. … Elsewhere in the Pac-12 and college football, the first playoff rankings will be released this afternoon (we will delve into them more tomorrow). The biggest question in these parts is simple: Will Oregon be in front or behind Ohio State, a team it defeated on the road without Thibodeaux? … Look who is third in Jon Wilner’s latest conference power rankings in the Mercury News. Yep, Washington State. … Washington’s injury replacement at linebacker, freshman Carson Bruener, won a couple of Pac-12 weekly awards. Which begs the question, why wasn’t he playing more before? … Oregon is getting healthy in the secondary just in time to make its trip to Seattle. … Are the Ducks and Huskies battling over the same recruits? Yes, even if Jimmy Lake denied it yesterday. … The Beavers need to get their running game back on track. Oregon State can’t win without it. … Colorado hopes to finish a weak season with strong effort. And hopes to get Nate Landman back at some point. … Utah needed a special teams spark. The Utes got it from an unusual source. … Kyle Whittingham is now the second-longest tenured college football coach in America. … Herm Edwards won’t reach that level at Arizona State. … Will Plummer may have to do more for Arizona. … In basketball news, a newcomer feels right at home at Oregon State. … Colorado has things to work on after its exhibition loss. … Arizona won its exhibition opener last night. The Wildcats are trying to re-establish that McKale Center roar. … Arizona State may have found a new catalyst.

EWU and Idaho: Around the Big Sky, the matchup between Eastern and Montana State will be a face-off of top-5 FCS teams. The Eagles are fifth and the Bobcats fourth this week. … Sacramento State has a good shot at an undefeated conference season. … Montana is playing through injuries. … In basketball news, Weber State has a pair of wings that will be challenging to guard. 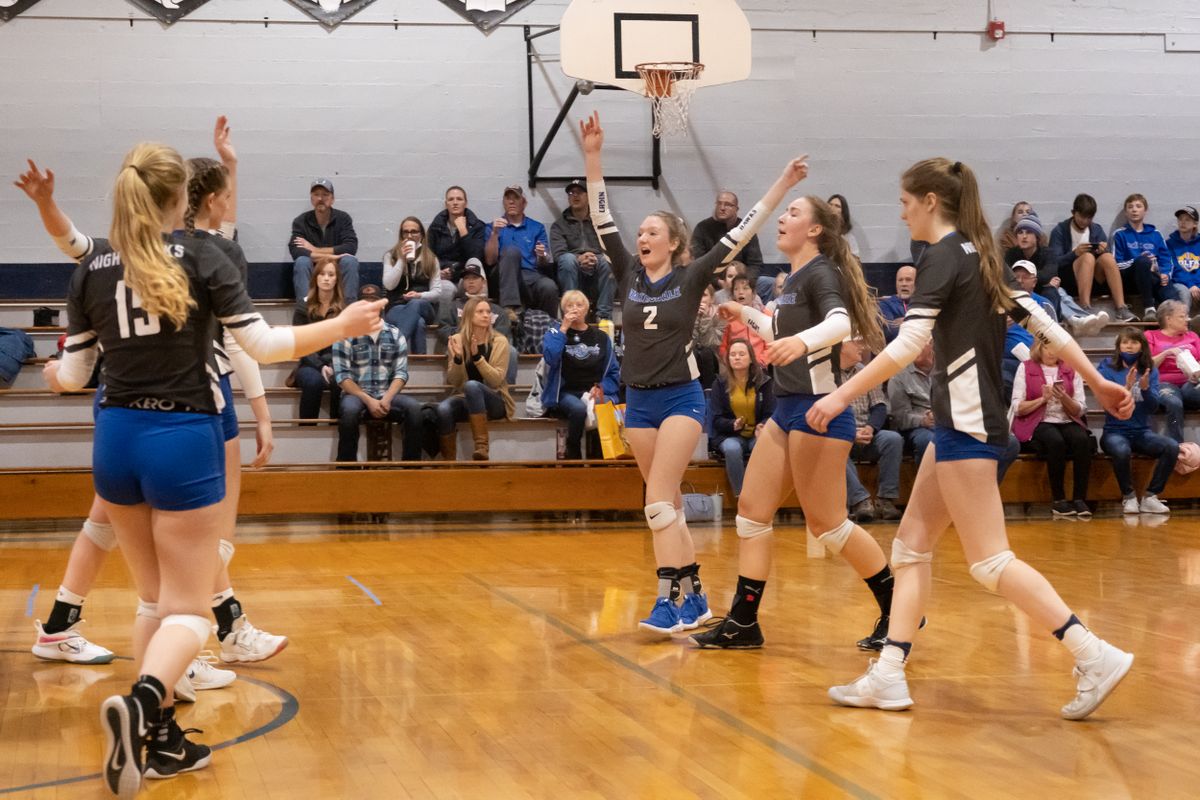 Preps: The Oakesdale volleyball program has been pretty darn good for the past decade. How good? Madison McCord tells us with this story. … Dave Nichols has a roundup of 2A soccer district play from Monday.

Seahawks: If you follow Russell Wilson on social media, you know the pin is out of his finger. But I’m not sure I needed to see a picture of it. Maybe that’s just me. Anyhow, he’s taken a big step toward returning to the field. … His biggest task ever may lie just ahead because the offense isn’t anywhere near where it needs to be. … If Chris Carson can play, it will help. … If you have questions, here are four answers.

Mariners: One of the questions the M’s need to answer this offseason is who plays third base? … The offseason could very well be condensed by a lockout.

Sounders: It’s been a while since Seattle has won a match. The Sounders did not win last night, playing to a 1-1 draw with the L.A. Galaxy. In Seattle. The good news? Jordan Morris played some and looked good.

• It’s election day. One nice aspect of how Washington handles elections is our ability to vote early. That’s important when people knock on your door. You can just tell them, “Sorry, I have voted already,” and get back to your life. If the greatest gift is time, than vote by mail is a gift. Until later …