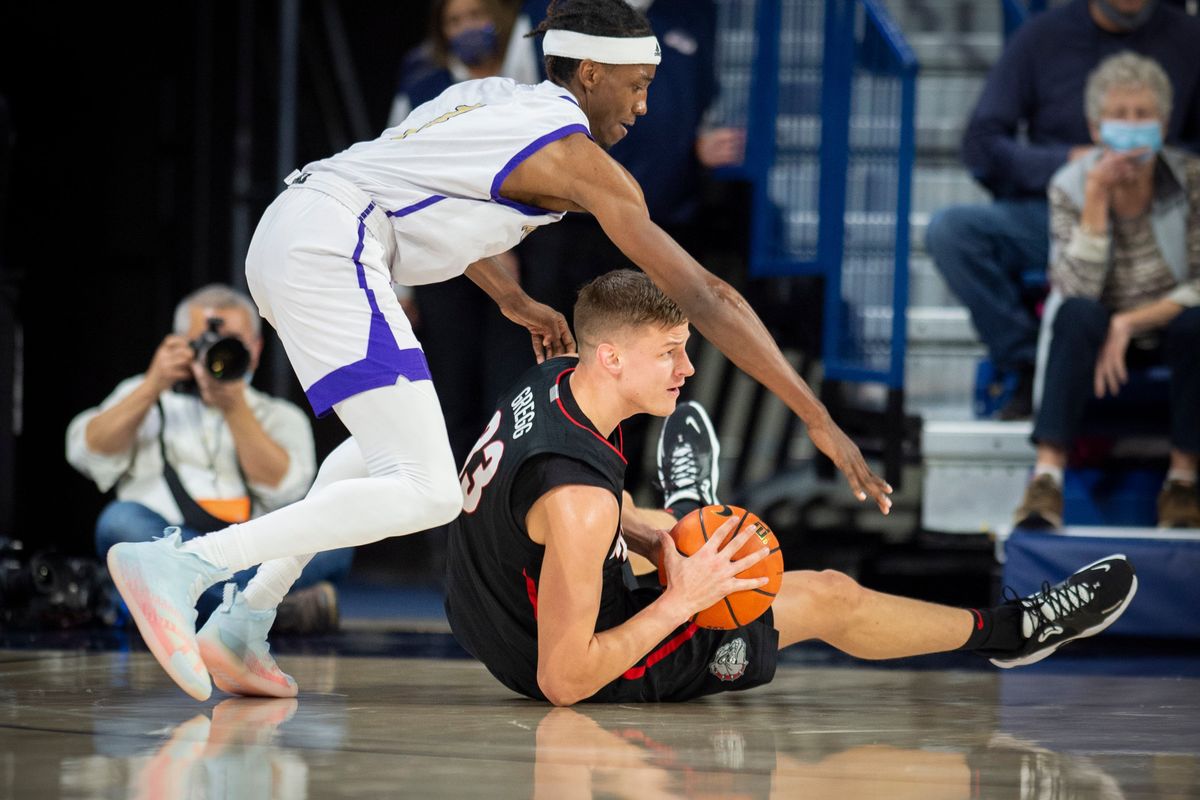 Gonzaga’s Ben Gregg (33) comes up with the ball after a scramble against Alcorn State’s Dontrell McQuarter, left, in the Bulldogs’ game against Alcorn State Monday, Nov. 15, 2021 at McCarthey Athletic Center at Gonzaga University in Spokane, Washington. (Jesse Tinsley/The Spokesman-Review)

Julian Strawther’s career-high 18 points led No. 1 Gonzaga to an 84-57 win over Alcorn State in the Kennel on Monday.

Hunter Sallis played 25 minutes off the bench and scored 16 points on 6 of 9 shooting with 4 of 5 from the stripe.

The Zags will again be heavy favorites against Bellarmine at home on Friday. That game is scheduled for 6 p.m. on KHQ/ROOT.

If this is what a lull looks like for the Gonzaga Bulldogs, it should be a good omen for the rest of the 2021-22 season.  | Read more »

Freshman Hunter Sallis is just three games into his Gonzaga career, but he’s already showing many of the qualities that made him a five-star recruit. | Read more »

Strawther connects on a 3-pointer before the first media timeout and leads with a team-high five points. Timme behind with four.

GU hasn’t missed a field goal in over five minutes and are 8 of 11 from the field.

Braves are 3 of 11 with five turnovers.

Holmgren trails behind with 11 points and 3 blocks. Timme and Sallis each add six apiece.

Gonzaga is up big in the first half over Alcorn State, lead by Julian Strawther’s 15 points and Chet Holmgren’s 11 with three blocks.

Drew Timme has been doing a bit of everything with six points, five rebounds, four assists and two blocks.

The Zags are dominating on all fronts with 62% shooting compared to the Brave’s 30%. Expect coach Mark Few to put in some heavy bench minutes in the second half.

Julian Strawther is closing in on his career high with 15 points in the first half to lead the Zags.

15:51 - GU 56, ASU 29: Timme misses a gimme layup to hit double figures before a media timeout, but has eight points, five rebounds, six assists and two blocks for the most well rounded statline of the night.

The Braves aren’t giving up and are 7 of 11 in the second half, led by Thomas’ six since the break. Though the Zags simply outmatch them in every way and should cruise to a victory in the final 10 minutes.

7:24 - GU 75, ASU 45: Mostly bench lineup in for the Zags as Strawther stays on the floor. Sallis leading bench players with 11 points.

3:33 - GU 82, ASU 53: McQuarter throws down a mean dunk on Perry, which will be one the Braves’ positive takeaways from the night.

No. 1 Gonzaga is back to business at home in the Kennel tonight against Alcorn State, following Saturday’s top-5 showdown with Texas.

The Bulldogs (2-0) are coming off an 86-74 win over the Longhorns, backed by a career 37-point night from player of the year candidate Drew Timme.

The Braves (0-3) have struggled to start the season on a West Coast road-trip, falling to Washington State 85-67, Seattle University 69-66 and Portland 62-58 on Saturday.

The Zags will have tonight’s game and Friday’s contest against Bellarmine at home before facing another top-tier test in Las Vegas from Nov. 22-26 against Central Michigan, No. 2 UCLA and No. 7 Duke.

Drew Timme takes home Player of the Week from @TheAndyKatz after dominating No. 5 Texas 💪 pic.twitter.com/Ig9shQygbL

The win snapped a 3-game losing streak to start the season for the Zags, that finished No. 2 in the WCC and lost in the semifinal of the conference tournament 53-51 to Santa Clara.

Center Jeff Brown lead the team in his junior season with 16.7 points a game.

One mark of a great team is the ability to beat other great teams. Gonzaga took the first step toward proving why it deserves that label Saturday night, cruising past No. 5 Texas 86-74 to collect its 53rd consecutive win at McCarthey Athletic Center and its first against a top-five opponent since the building opened its doors in 2004. | Read more »

Byron Joshua’s debut season at Alcorn State wasn’t exactly a tale of two halves, but to say the freshman guard finished the year in a better place than he started it would be a massive understatement. | Read more »

The benefit of two of college basketball’s biggest non-conference games being staged in ear-splitting atmospheres at campus arenas in the first week of the season wasn’t lost on Texas coach Chris Beard and Gonzaga counterpart Mark Few after the Zags’ 86-74 win Saturday at the McCarthey Athletic Center. | Read more »

About 10 days after Jackson Shelstad narrowed his list to three finalists, including Gonzaga, the class of 2023 point guard announced his commitment to Oregon. | Read more »

The game wasn’t two minutes old and Gonzaga’s Drew Timme had scored on two layups, a free throw and a dunk. | Read more »

Rasir Bolton came to Gonzaga with an objective many of the program’s most successful transfer guards can relate to: win on the big stage, even if it means sacrificing individual accolades for the opportunity to play deep into the month of March. | Read more »