The windstorm left thousands without power for more than a week and caused at least $33 million in damage to the Spokane area. Winds picked up at about 12 a.m. and died down by 8 p.m. with a peak gust of 71 mph at 4 p.m. At the peak more than 250,000 customers lost power in Spokane and North Idaho.

The Inland Northwest quickly recovered from Monday’s windstorm that knocked power out to more than 45,000 electricity customers.

Power was restored by dawn Tuesday to most customers who lost it Monday evening as 60 mph gusts blew into Spokane.

The peak gust in Spokane was 62 mph at about 4:30 p.m. Winds died down with gusts from 30 to 40 mph overnight, said Laurie Nisbet, meteorologist at the National Weather Service in Spokane.

Winds significantly quieted Tuesday morning with sustained winds at about 14 mph and little to no gusts, Nisbet said.

A windstorm roared into the Spokane region Monday afternoon, snapping branches, toppling trees and knocking out power to about 40,000 homes and businesses at its peak. | Read more »

As of 7 a.m. Avista was reporting power outages affecting about 2,600 customers down from around 34,000 customers in its Eastern Washington and North Idaho service territory Monday evening. About 800 were left without power as of 1 p.m. Tuesday.

Inland Power and Light reported more than 6,000 without power Monday evening, but power had been restored to a majority of those homes by Tuesday morning.

About 500 customers remained without power. Kootenai Electric Cooperative had about 1,000 members without electricity Tuesday morning. 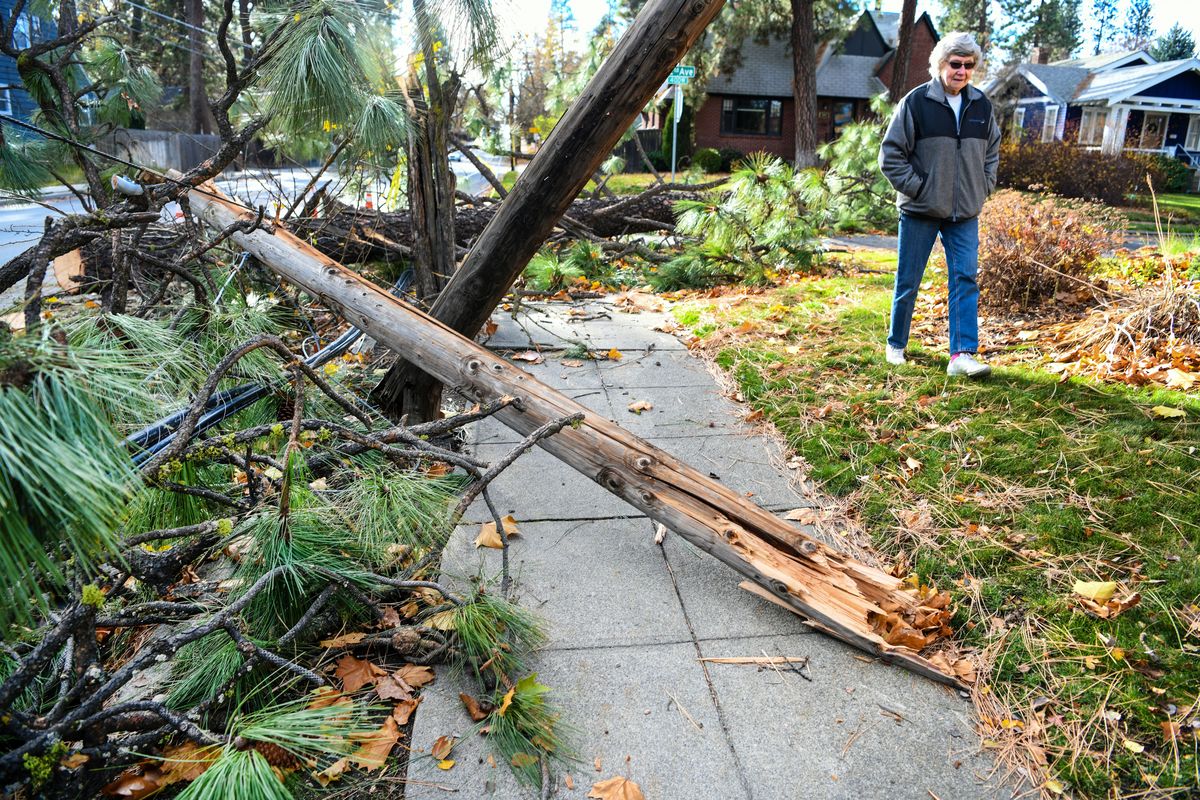 Kate Shrack gets a close view of the damage to a utility pole at the corner of 22nd Avenue and Bernard Street, Tuesday, Nov. 16, 2021, in Spokane. A falling pine destroyed the pole in the Monday evening windstorm. (DAN PELLE/THE SPOKESMAN-REVIEW)

There were about 30 reports of downed trees or branches in the right of way in the city of Spokane on Monday night, said Marlene Feist, public works director.

“We’re not seeing the uprooted trees at all,” Feist said, a stark difference from the January windstorm that left dozens of uprooted trees in parks and blocking streets.

The city switched to its winter shift schedule over the weekend, and has 20-hour-a-day coverage, Feist said. The winds dropped off before crews got off shift, allowing them to deal with hazards quickly, she said.

A dry air front moved in after the windstorm, leading to a drop in temperature. Tuesday night was expected to be the coldest this fall, Nisbet said.

Lows in Spokane are forecast to be around 22 degrees, but outlying areas like Deer Park could drop into the teens.

The cold temperatures were accompanied by snow showers Tuesday afternoon.

Todd Carter, meteorologist at the NWS in Spokane, said a “cold-core low” followed the strong cold front that swept through the area. The colder, more unstable air mass helped generate the snowfall, he said.

Reports of graupel, or “pellet-type snow” as Carter described it, also came in on Tuesday.

The rest of the week likely will be mostly sunny with light winds and high temperatures in the low 40s, Nisbet said. There’s a slight chance of rain or snow Thursday. With the precipitation toward the end of the week, there could be some fog, Nisbet said.