Ride operators twiddled their thumbs. Carnival game workers couldn’t holler at passersby because there wasn’t anyone to holler at. Some vendors sat at their booths waiting for potential customers to examine their wares.

Even in normal times, a 10-day county fair typically won’t have much of a crowd on a Tuesday afternoon. But the 2021 Spokane County Interstate Fair has been much quieter than usual.

This year’s fair began last Friday and runs through Sunday. During the first three days, 36,384 people passed through the entrance gates.

That’s a 36% decrease compared to the 56,803 people who attended during the first three days of the 2019 fair – which set the all-time attendance record. There wasn’t a traditional fair in 2020, due to the COVID-19 pandemic. 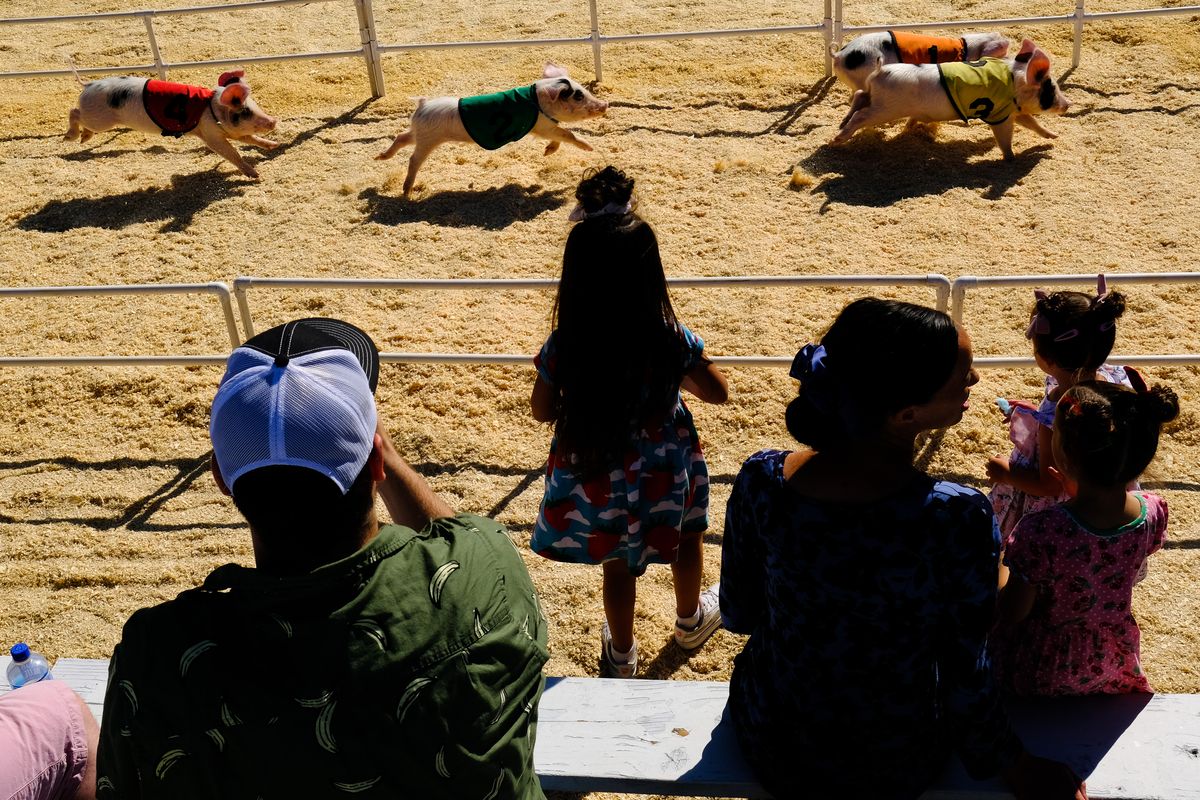 The All Alaskan Racing Pigs race to the delight of children and adults at the Spokane County Interstate Fair on Tuesday, Sep 14, 2021, in Spokane, Wash. (Tyler Tjomsland/The Spokesman-Review)

Spokane County Interstate Fair and Expo Director Erin Gurtel said she thinks there are a few reasons for the decreased attendance.

Some people probably stayed home because it rained on Friday, Gurtel said. Plus, the fair reduced capacity for grandstand events to reduce the likelihood of COVID-19 transmission. That meant fewer people came to the rodeo on Friday and Saturday.

Gurtel also said she thinks some people are deciding to stay home for safety concerns.

“Understandably, I think some community members are making a choice to not join us this year due to COVID,” she said.

This year is Munoz’s second full Spokane County Interstate Fair. Without knowing the official numbers, she estimated attendance might be down 20%.

Other vendors shared similar sentiments. They said that while attendance has been down, business has been OK.

The Andersons have been selling their figurines at the Spokane County fair for decades. Gordon Anderson, Christine’s husband and fellow co-owner, said Friday’s rain drove people inside, which was good for vendors.

“Business-wise it was equal to the years before,” Gordon Anderson said.

Patricia Sanford, co-owner of Spokane Valley-based 509 Metal Works, has been selling her business’ hand-made signs and metal goods at the last three fairs.

Vendors all agreed that the last weekend is always the busiest. There’s still time for attendance numbers to rise throughout the week.

“I expect a big crowd for the weekend,” Gordon Anderson said.