A GRIP ON SPORTS • Where were we? Well, wherever it was, it was a far, far better place than Washington State football fans. Heck, Pac-12 football fans in general. There were a couple outliers, of course, including the game in Seattle, but otherwise, it was a Sad Sack Saturday for the conference.

• We’ll start, as we should, in Pullman. That’s where the Cougars played really well for about 25 of the game’s first 30 minutes. And then didn’t seem to show up after halftime.

As John Blanchette and Theo Lawson point out this morning in The Spokesman-Review, that’s been a recurring theme for the team under second-year head coach Nick Rolovich. For the sixth time in his seven games, Rolovich’s team built a double-digit lead. But for the fourth time, the Cougars couldn’t hold onto it. And in two of those, they gave up 38 unanswered points en route to blowout losses. 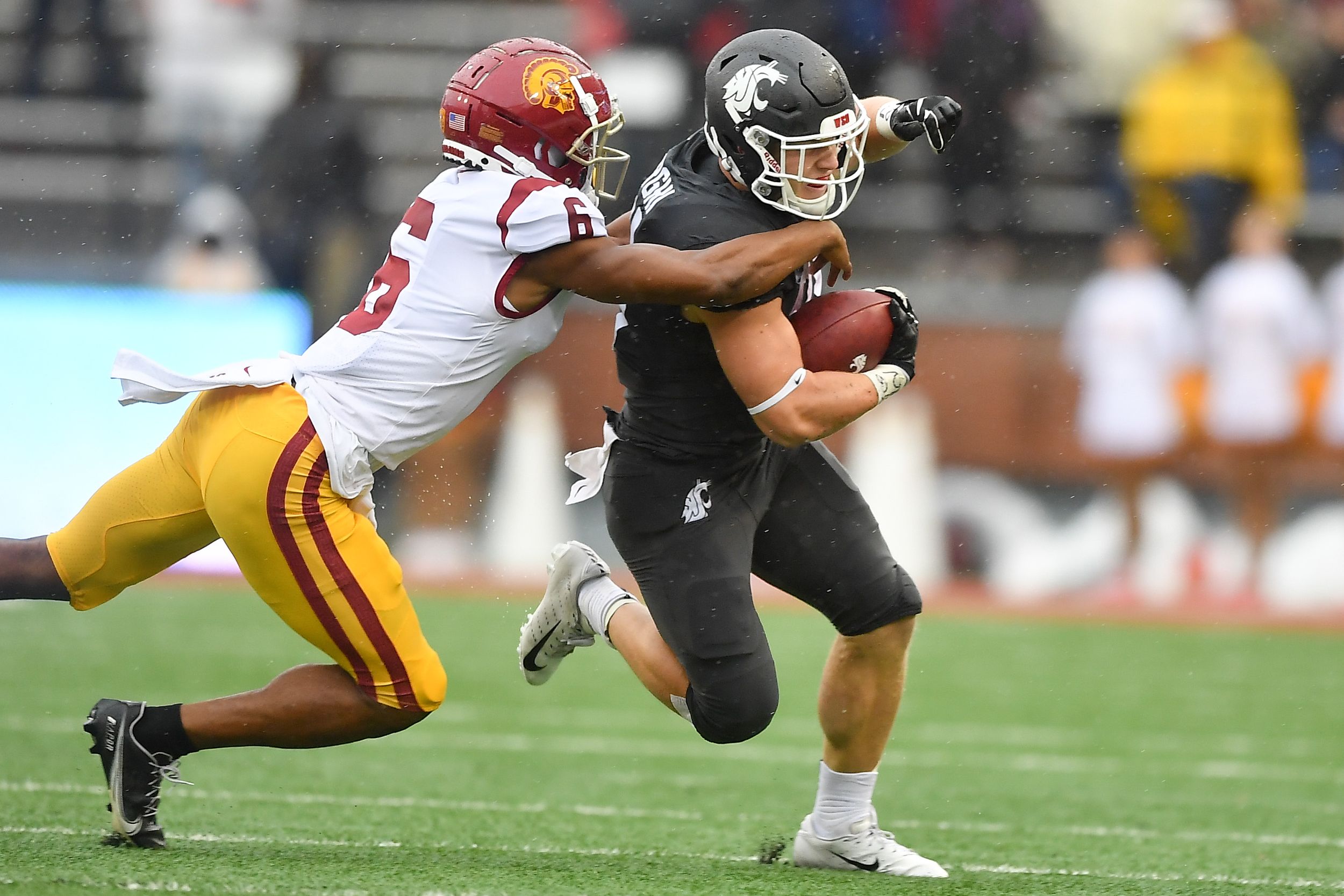 Yesterday’s 45-14 loss to USC was especially galling, not just because it was at home – last year’s blowout was at Utah in the final game – but due to other factors as well.

In order: USC seemed ripe for the plucking after firing head coach Clay Helton last week and experiencing an adventurous trip to Pullman; the Cougars dropped a couple shots at building bigger lead; Max Borghi was a huge part of the early domination but then disappeared; USC lost starting quarterback Kedon Slovis to an injury; the defense gave up a late first-half momentum-shifting touchdown seemingly due to a fourth-down secondary mixup; and Jayden de Laura was injured in the first half, seemed poised to not play after halftime but returned to the game for an ill-advised stint.

No need to go in-depth in all of them, as Cougar fans not only lived it Saturday, they documented each in excruciating detail on social media. (Hint to self: Read Twitter on game days in small doses as to avoid a bile overload.)

But there is one we’re willing to look into a bit deeper.

Borghi seems to be the forgotten man in the Cougar offense. Early on Saturday, he was the focus, carrying the ball seven times in the first quarter for 52 yards. The rest of the game? Six more times for 20 yards, 14 of which came in the final quarter when the game was out of reach. 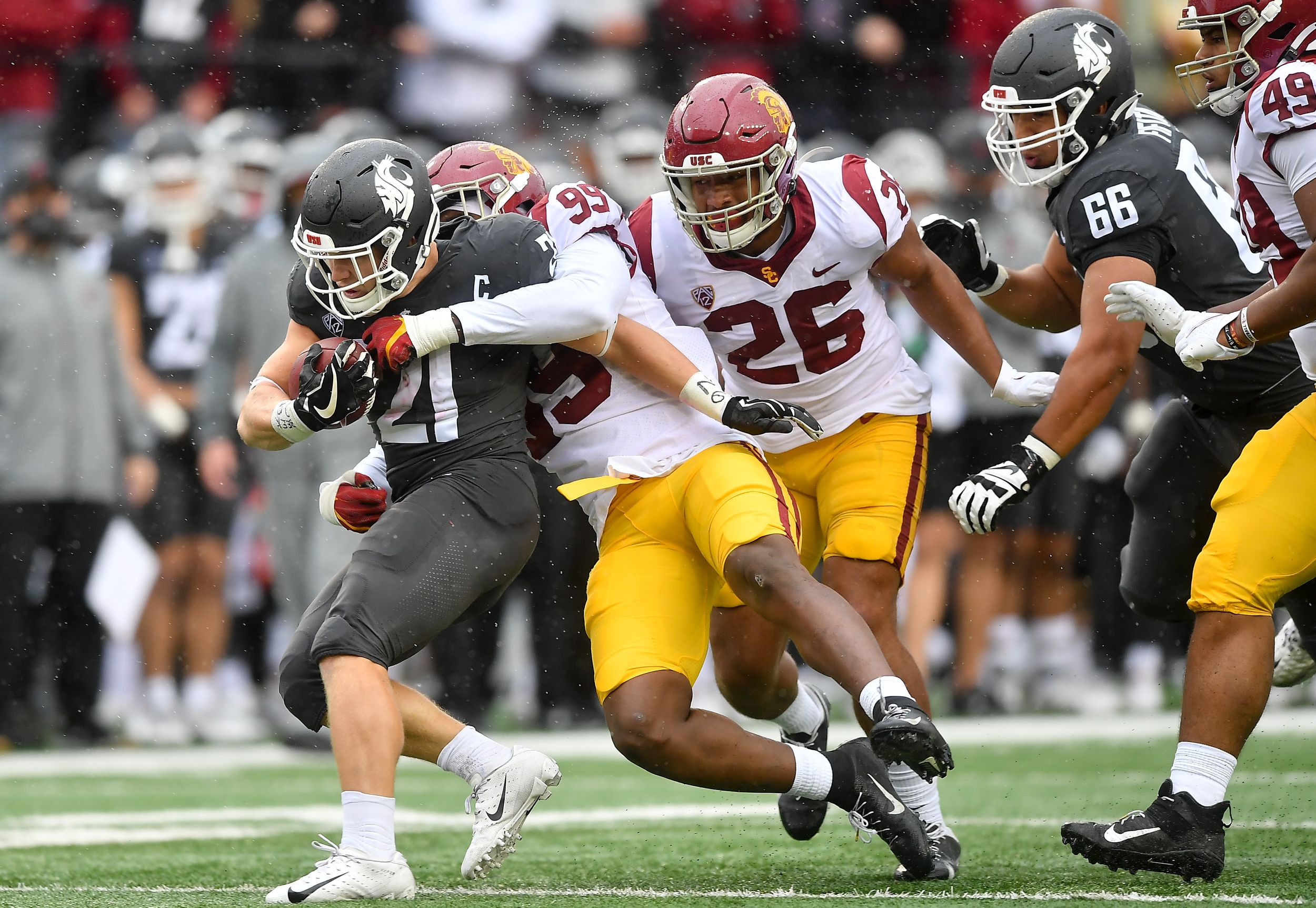 Where it gets really odd is Borghi doesn’t seem to be a part of the passing offense at all, other than as blocker. In his first two years in Pullman, Borghi caught 139 passes for 971 yards and nine touchdowns. That was while playing in Mike Leach’s Air Raid attack, of course. And we’ve come to understand Rolovich’s Run and Shoot doesn’t use the backs in that capacity that much.

But with a transcendent receiving talent such as Borghi, wouldn’t it behoove Rolovich to find ways to get him the ball in space? In four games since Rolovich has taken over, Borghi has four catches for 58 yards, including none yesterday.

It seems to be wasting one of a uniquely talented running back’s most striking skills.

• Sadly enough, Cougar fans are used to losses to USC. With only 10 wins ever over the Trojans – five of those in the last 18 games – such an outcome isn’t surprising. What was surprising yesterday, however, is how poorly the rest of the conference played against, in one case, a lower-division foe.

That would be Arizona, whose 15th consecutive loss came at home, to Big Sky opponent Northern Arizona. The Lumberjacks had already lost twice this season to FCS foes yet found a way to win 21-19 in Tucson.

But that was not the conference’s only bad outcome yesterday.

How about Colorado being dominated at home by Minnesota? Or 13th-ranked UCLA coming off a bye and being unable to hold off Fresno State late? Or 19th-ranked Arizona State handing No. 23 BYU four turnovers in a 10-point defeat? Or Utah losing in triple overtime to San Diego State?

Heck, even Oregon’s 48-7 win over a middle-of-the-road FCS school, Stony Brook, included a lackluster first half and an injury to the starting quarterback (though it is said not to be serious).

All in all, it wasn’t the best day the conference has had. Of course, it also wasn’t the worst. With Pac-12 football recently, there has been a lot worse days. 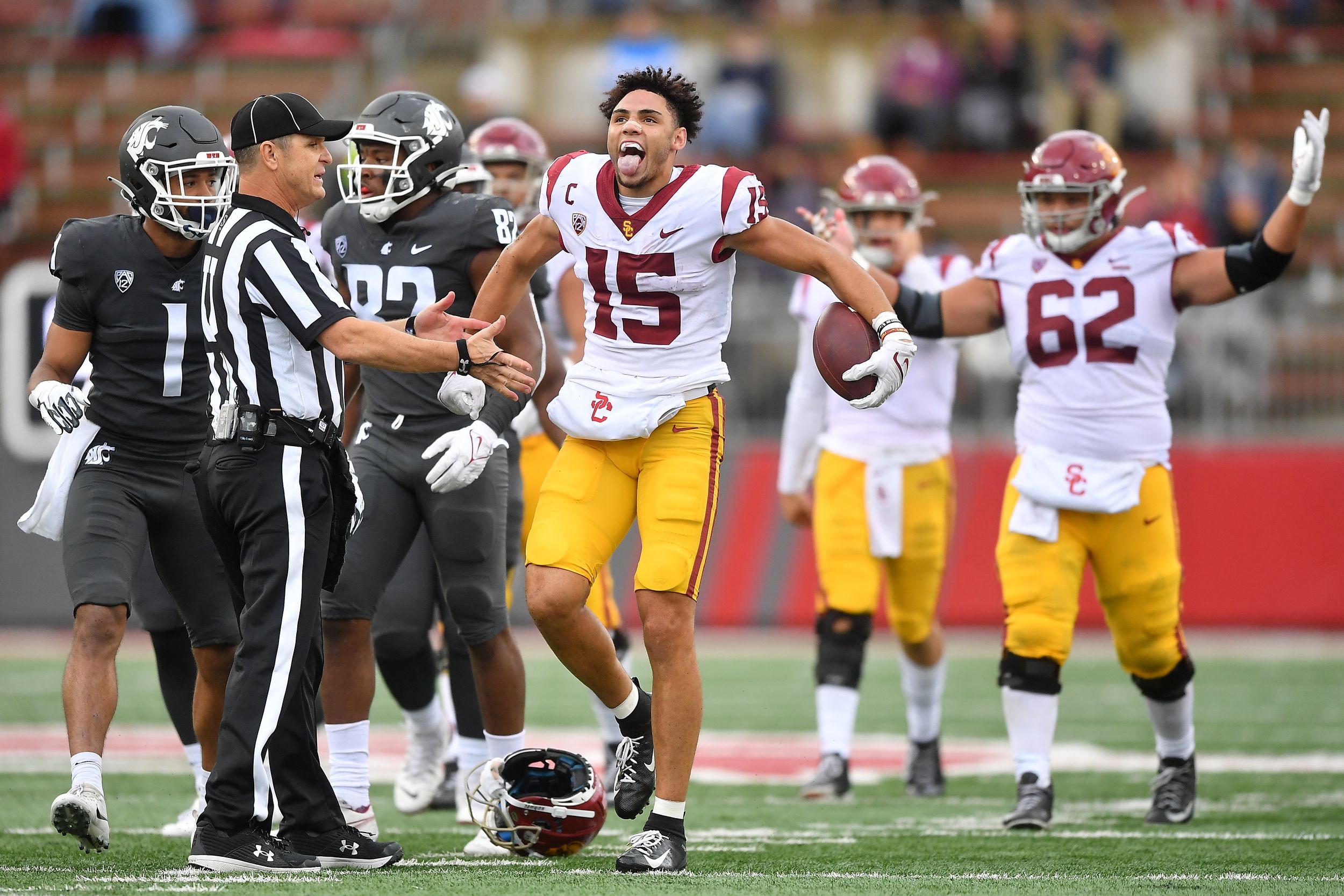 WSU: We’ve linked John’s column already, as well as Theo’s piece on the inability to hold a lead. (Theo also wrote the story about the Trojans’ plane snafu.) But there is more, lots more. … Colton Clark has the game story as well as the difference makers. … Before the game he let everyone know Jaylen Watson was available to play. … Tyler Tjomsland was also in Pullman and has this photo report. … The guys in the office put together the recap with highlights. … From the Los Angeles area, we can pass along quite a few stories and a couple columns about USC’s come-from-behind win. And the quarterback controversy that is sure to follow. … Elsewhere in the Pac-12 and college football, Jon Wilner delves into all things related to Saturday football, the good and the bad. … Washington got healthy, really healthy, at the expense of Arkansas State. The blowout allowed the Huskies to play a lot of people. … Oregon used its second-string quarterback for the first time, though it may have happened earlier than the Ducks expected. … Oregon State methodically ground down Idaho in a 42-0 win. … Stanford traveled to Tennessee and defeated Vanderbilt 41-23. … The Colorado offense was nonexistent against visiting Minnesota. … For the second consecutive week Utah lost the battle at the line of scrimmage. A quarterback change helped the Utes rally but they fell just short against San Diego State. Literally. … UCLA had a bye week to get ready for Jake Haener and Fresno State. It didn’t help as the Bulldogs rallied for a 40-37 win the Rose Bowl. … California scored often but had to hold off Sacramento State. … Arizona State’s issues are varied but they come down to one phrase: a lack of discipline. The Sun Devils’ loss at BYU was just the latest manifestation of that. … Can Arizona fall any deeper into the abyss? … Finally, George Kliavkoff was in Boulder yesterday in his conference-wide tour. He didn’t see nearly the excitement as he had experienced in Columbus the week before. 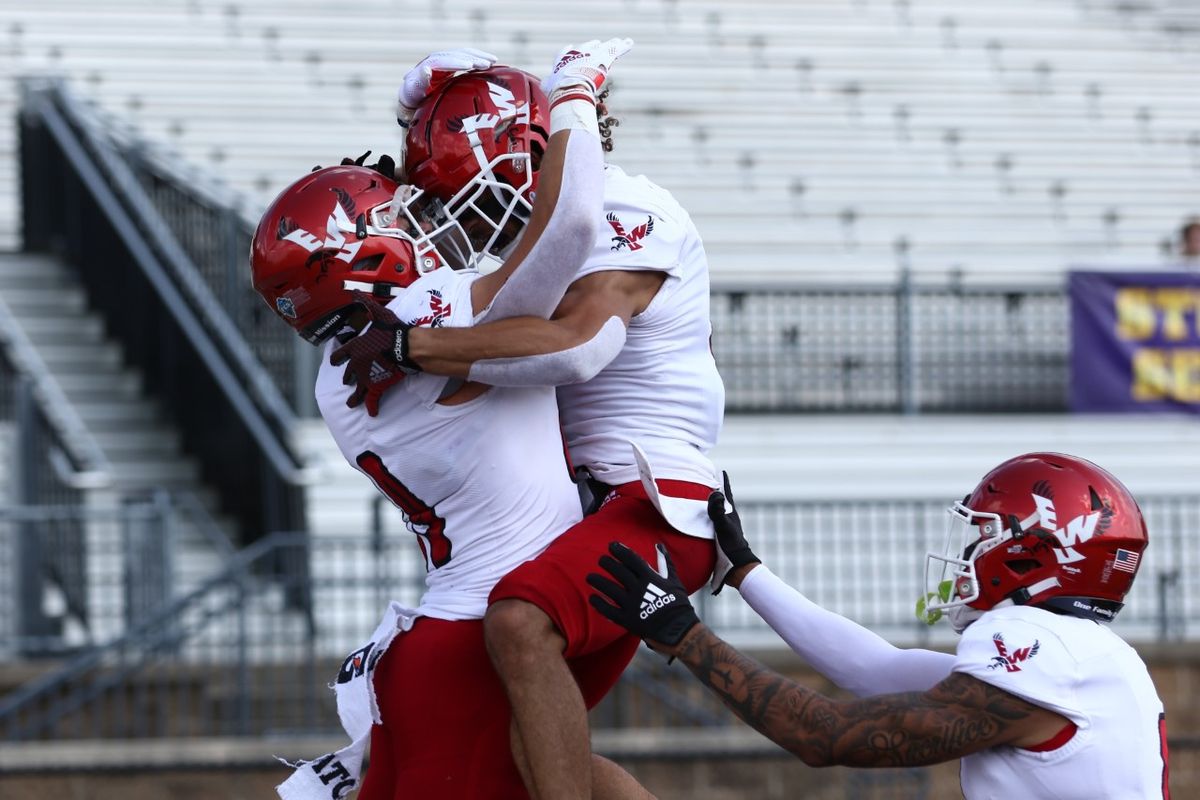 EWU: The Eagles dominated the first half against Western Illinois. Then had to hang on for dear life in a 62-56 road win. Dan Thompson has the coverage. … Around the Big Sky, Weber State couldn’t keep up with third-ranked James Madison and lost 37-24 in Ogden. … Montana State routed the University of San Diego. … Northern Arizona won against Arizona for the first time since 1932. … UC Davis routed Dixie State in the Aggies’ home opener. … Northern Colorado lost to Lamar in overtime. … Portland State picked up its first win. … Montana had a bye.

Idaho: The Vandals hit the road yesterday and were throttled 42-0 by an Oregon State team that wasn’t about to become another victim of the Big Sky. Idaho had just 192 yards in total offense.

Whitworth: The Pirates were also on the road and they won 31-15 at Claremont-Mudd-Scripps. The 3-0 Whits will return home next week against Northwest Conference foe Lewis and Clark. Jason Shoot has this summary. 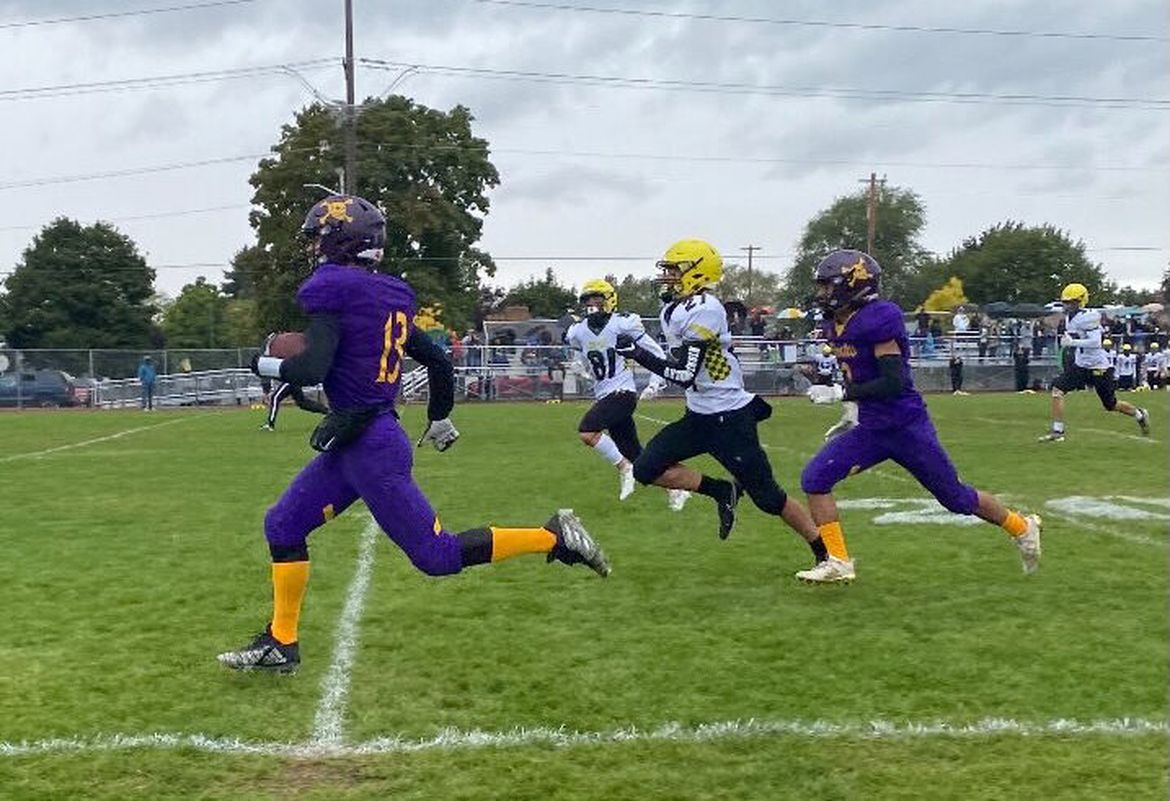 Preps: Expect more Saturday high school football this season, partly due to COVID-19’s caused bus shortages and partly due to the closing of Albi Stadium. Rogers made yesterday a special Saturday by hosting Shadle Park at home, though the Highlanders picked up the victory. Johnathan Curley has a story on the special nature of the home game as well as a roundup of the rest of the football action. … Dave Nichols summarized the action from Friday night as well as putting together a game story from Central Valley’s rout of Ferris. … Steve Christilaw has this story on Clarkston’s Friday night win over North Central.

Indians: Rain kept Spokane and Everett from playing yesterday and allowed Eugene to pull within percentage points of the Indians in the High-A West standings. If the Emeralds can win in Tri-City today and the Indians are again unable to play, Eugene will claim the regular season title.

Horse racing: Playfair is long gone but it is not forgotten. Jim Price has a piece today on the racing venue and how trainer Dan McCanna’s life has been intertwined with it.

Mariners: Another reason why the M’s may not make the postseason? Yusei Kikuchi hasn’t been nearly the same the second half of the year. He was poor in their 8-1 loss to the Royals on Saturday. … Andres Munoz, the hard-throwing reliever out the season with an arm injury, is working hard to get back.

Seahawks: The fans are back in Lumen Field, albeit with tight COVID-19 protocols. … There are a couple of injuries that could cause Seattle issues. … The Titans and the Hawks are eager to win now.

Sounders: The woes in Salt Lake continued as Seattle fell 1-0, despite the presence on their sideline of the former RSL coach.

• In a way I am sad I wasn’t able to put together my TV Take yesterday. Joe Davis and Brock Huard were fun to listen to in the times I was able to peek in at the game. But the action on the field in the second half might have led me into uncharted territory. And no one needs that. Until later …