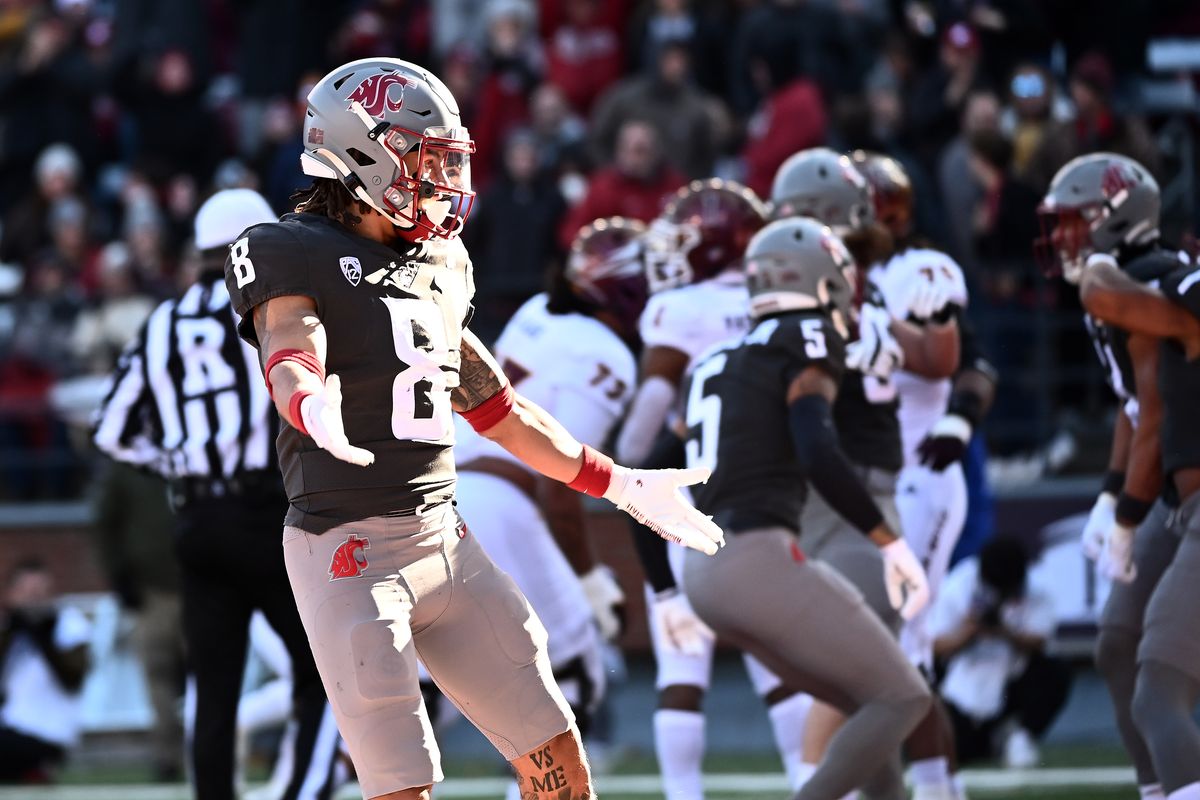 Washington State nickel Armani Marsh (8) celebrates after a play against Arizona State during the first half of a Pac-12 game Saturday at Gesa Field in Pullman. (James Snook/For the Spokesman-Review)

PULLMAN – What started as a stellar showing turned into a second-half sleepwalk.

Washington State did enough in the first two quarters to withstand a late surge from Arizona State and win 28-18 at Gesa Field on Saturday.

Running back Nakia Watson and a stingy Washington State defense fueled the first-half rout, that saw the Cougars go up 28-0 at halftime.

Watson scored three touchdowns and amassed 141 yards in the first half. He gained 17 yards the rest of the way, as the Cougars managed 65 yards and were 0 of 5 on third downs in the second half.

It was a similar story for the Cougars defense, which stifled the Sun Devils (3-7, 2-5) for most of the game and didn’t allow a third down conversion until midway through the third quarter.

Arizona State rallied for three touchdowns in the final 16 minutes and would have had an opportunity to make up the difference if not for a redzone stop and three failed 2-pt conversions.

The Cougars will take the win, despite the late sloppy play. Washington State will play at Arizona at 11 p.m. next Saturday on Pac-12 Network, where Wildcats quarterback Jayden de Laura will get a shot at his former team.

Jacob Thorpe: The Cougars under Jake Dickert have built their identity as one of the country’s most resilient bunch

Going back a whole year ago, when Washington State head coach Jake Dickert was still in his probationary period, he went to great lengths to instill a small, pivotal change: He wanted the Cougars to be player-led. | Read more

If you watched Washington State outlast Arizona State 28-18 Saturday on the Pac-12 Networks, you probably saw the commercial for the Jimmy Kimmel Los Angeles Bowl more than once. | Read more

PULLMAN – Washington State’s shorthanded offensive line may have taken another hit to its depth. | Read more

15:00 – ASU 0, WSU 0: The Cougars win the toss and elect to receive the opening kickoff. The Sun Devils will defend the east goal.

13:17 – ASU 0, WSU 0: The Cougars pick up a first down, but their drive stalls after a pair of incompletions from Ward. The Sun Devils start on their own 10 after an excellent punt out of bounds.

9:33 – ASU 0, WSU 0: Nearly a turnover as Jackson put a big hit on a sack to knock the ball loose, which is recovered by the Sun Devils at their own 1 yard line. After a punt from the endzone, the Cougars start with great field position at the ASU 37.

6:31 – WSU 7, ASU 0: Dickert puts his trust in his running back on 4th-and-goal from the 3 and Watson punches in a touchdown run on a direct snap.

Cougars finish off the 9-play 39-yard drive with the do-or-die conversion at the goal line. Watson ran for seven yards on third down the play before.

Nakia Watson stampedes his way to the end zone for @WSUCougarFB. 😤

3:59 – WSU 13, ASU 0: Cougars making it look easy on their third drive. Smithson takes a push-pass from Ward around the right end for a 2-yard touchdown to cap an 84-yard drive that took seven plays. Janikowski’s PAT was blocked.

Ward is 10 of 16 for 110 yards and a touchdown. Watson leading the Cougs in rushing and receiving yards with 31 and 42, respectively.

Arizona State is still at minus-1 total yards due to Jackson’s strip sack.

1:50 – WSU 13, ASU 0: Langford has been solid in coverage early, he breaks up a pass intended for Johnson to force ASU’s third punt of the quarter.

13:57 – WSU 13, ASU 0: Cougars goal line gamble doesn’t go their way the second time, as Ward’s pass to Nunnally is broken up on fourth down. ASU takes over on its own 2 and WSU fans will be wondering by Dickert didn’t put the ball in Watson’s hands, who has seven carries for 64 yards and nearly 40% of WSU’s total offense.

ASU’s long snapper was called for targeting and was ejected, which doesn’t bode well for the Sun Devil’s punt-heavy offense.

9:39 – WSU 13, ASU 0: The Cougars punt it right back and the Sun Devils will start again on their own 10, playing most the game deep in their own territory.

8:13 – WSU 13, ASU 0: Smith-Wade intercepts Bourguet at the ASU 32 and runs it back to the 4, where the Cougars will take over for a should-be easy touchdown.

PICKED OFF! @Chau__Smith with his 2nd INT of the season!

7:43 – WSU 21, ASU 0: No messing around at the goal line this time, as the Cougars give back-to-back handoffs to Watson, who scored a 5-yard run on his second try.

Ward’s pass to Smithson on a 2-pt conversion try is successful.

7:03 – WSU 21, ASU 0: Emery Jones enters the game at QB for ASU and immediately throws an interception to Langford – or so it appears, as the play is called back for an offsides penalty against Stone Jr.

What a difference Nakia Watson makes.

The Cougars offense, which struggled for three weeks in the running backs absence, got anything they wanted against Arizona State in the first half en route to a 28-0 lead in Pullman.

Watson took 13 carries for 99 yards and three touchdowns and added two receptions for 42 yards. Watson accounted for 48% of the Cougars total offense.

On the other side, the Cougars defense had an interception and two sacks and limited the Sun Devils to 61 total yards and 0 of 6 on third down conversions.

A win today would clinch the Cougars bowl eligibility.

Arizona State will receive the second half kickoff.

The Cougars start on their own 18.

Crowd shot at #WSU early in the third with the Cougs up 28-0 pic.twitter.com/5vmZyi0AnA

3:48 – WSU 28, ASU 0: The visitors finally eclipse 100 yards of total offense and convert their first third down late in the third quarter.

The Sun Devils still have to punt and the Cougars start on their own 13.

Not giving in.@ASUFootball‘s Jalin Conyers gets the Sun Devils on the board.

The Sun Devils start on their 22.

7:57 – WSU 28, ASU 6: Jones had an open man in the endzone, but his throw sails high and the Cougars take over on their own 7 after a turnover on downs.

That will about do it for ASU, after their 71-yard drive drained 5:50 off the clock and came up empty.

Poor showing in the second half for the Cougars, though this one should be in the books. WSU recovers the onside kick.

Washington State plays host to Arizona State, one win away from securing bowl eligibility, on a cold afternoon in Pullman.

Arizona State can’t afford another loss this year if it wants to play in the postseason. The Sun Devils already fired coach Herm Edwards earlier this year and are coming off a 50-36 loss to No. 9 UCLA.

The Cougars snapped a three-game skid with a 52-14 win over Stanford last week. WSU benefited from the return of running back Nakia Watson, but its offensive line took a hit with the loss of left tackle Jarrett Kingston.

#WSU and #ASU working through early warmups ahead of a 12:30 kickoff here in Pullman.
Several Cougar players exercising shirtless, getting accustomed to the 37-degree temp. pic.twitter.com/hJSk6LQe0M

All white everything 🧵#ForksUp | #O2V pic.twitter.com/vTIeaWagRO

The two teams have only played twice since 2016, with Washington State winning 34-21 last year in Tempe, Arizona.

PULLMAN – A few days after Washington State turned in its best effort of the season – defeating Stanford by 38 points to snap a three-game skid – Cougars coach Jake Dickert was asked how his team managed to turn things around. | Read more

Theme of the game … | Read more

The pick: Why Washington State will beat Arizona State

PULLMAN – A frigid setting and an opponent that’s heating up – it doesn’t bode well for the visitors. | Read more

PULLMAN – In his first season as a Washington State starter, Chau Smith-Wade has quietly emerged as a Cougars star, a Pac-12 standout and one of the most proficient coverage cornerbacks in the nation. | Read more

What is it? Coming off a reinvigorating victory, Washington State (5-4, 2-4 Pac-12) is eyeing bowl eligibility when it faces Arizona State (3-6, 2-4), which is playing under an interim coach. | Read more

STANFORD, Calif. – The Washington State Cougars are taking high spirits into the home stretch of their season coming off what linebacker Daiyan Henley called a “bonanza” of a day in the Bay Area. | Read more