At a time when the United States is doing less for refugees, four seniors at The Community School decided to do a lot more.

Tasked in a school project with studying the worldwide refugee crisis, Cierra Morris, Ashlin O’Kelly, Shea Handelman and Katelyn Devine went beyond the script by engaging refugees who work at the Global Neighborhood Thrift Store in north Spokane.

The store is part of Global Neighborhood, a nonprofit which helps find employment for refugees. Typically, refugees are employed for six months, or take a job training program, while they enroll in ESL classes.

Located just a few blocks from The Community School on North Monroe, the store offered a unique opportunity.

In the school’s junior-senior block project, “Yearning to Breathe Free,” teacher David Egly challenged students to consider the bottom-line question: What are human rights, what are the consequences for violating them, and what can we do about it? 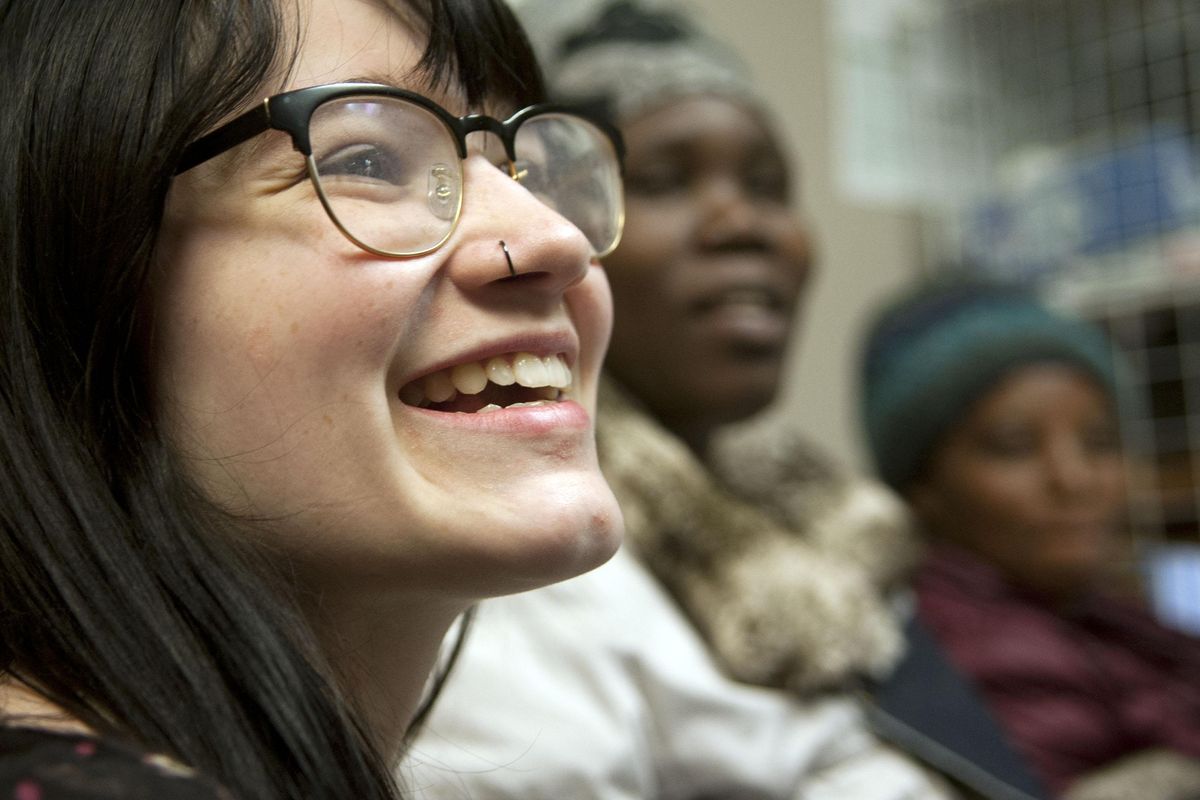 Ashlin O’Kelly, left, a senior from The Community School smiles as she teaches English at Global Neighborhood Thrift Store on Friday, Dec. 14, 2018. (Kathy Plonka / The Spokesman-Review)

Answering the first two were relatively easy. Students hit the books and the internet, gaining some perspective on the past and present politics that led to a worldwide refugee crisis.

At home, students worked with World Relief to organize winter supplies for recently-arrived refugees, many of them from Africa.

The need is great.

The number of forcibly displaced people around the world has skyrocketed since 2007, from 42.7 million that year to 68.5 million in 2017.

Most of the increase has been fueled by ongoing fighting in Syria, Myanmar, and the Democratic Republic of the Congo.

Others are being displaced in large numbers by conflicts in Burundi, the Central African Republic, Iraq, South Sudan, Sudan, Ukraine and Yemen.

However, the influx of legal refugees into the United States has dropped from 85,000 two years ago to about 22,000 this year under the Trump administration.

It’s the same pattern in Spokane: 600 refugees arrived in 2016, but the area has welcomed only about 200 so far this year.

The academic exercise wasn’t enough for some, Egly soon learned.

After connecting with Jen Landis at the Global Neighborhood Thrift Store on Indiana Avenue near Monroe Street, Egly asked for volunteers to help teach English to recent refugees who work at the store.

“I honestly expected one or two … I got an overwhelming response,” Egly said. “Pretty much everyone who heard about it wanted to sign up.”

Four students, Morris, O’Kelly, Handelman and Devine, were selected based on the letters they wrote to Egly.

Instead of focusing on memorization of English words and phrases, they used scripts provided by Gonzaga University focusing on the challenges of everyday life. Every day, two of the four students would talk through a situation, such as calling in sick to work or asking for help with a flat tire.

When a refugee struggles with a word or phrase, they talk it through until it’s right.

Playing the role of teacher was easy and rewarding.

Shy at first, the refugees at Global Thrift soon opened up.

“Now they’re eager to talk,” Devine said. “They call us teacher, but I’m learning a lot from them as well.”

When the prepared scripts ran out, the girls made their own, and used a Google program to post reflections on the refugees’ progress.

“That wasn’t part of the original idea,” Egly said, smiling at his students’ initiative.

“Now they’re already thinking about keeping this up after graduation,” Egly said.