PULLMAN – He won’t be the only Washington State undergraduate student watching Saturday’s Pac-12 opener, nor will he be the only person on UCLA’s Athletics payroll in attendance at Martin Stadium.

But Andrew Cho, quite certainly, will be the only one fighting the urge to pump his fist and howl whenever Anthony Gordon throws a touchdown pass, only because he’s the one who’ll need to relay it – in a professional manner – to the 85,000-plus users that follow @UCLAFootball on Twitter.

You could say Cho’s living a dream and facing a nightmare this week, as the Cougars host the Bruins at 7:30 p.m. Saturday.

The 21-year-old is still technically enrolled as an undergrad student at Washington State, but he also holds a full-time job in Westwood, where UCLA employs him as a Director of New Media for the Bruins football program. Cho manages the team’s social media accounts, coordinates photo shoots and still gets to scratch his graphic design itch, creating “edits” for football recruits that add to an enticing recruiting package at UCLA.

Artists usually aren’t as recognizable as their portfolio. While the majority of Washington State fans probably couldn’t pick Cho out of a crowd, most of them have been mesmerized by his free-handed pencil sketches, unique digital drawings and slick graphic posters, which, before Cho swapped crimson for baby blue, often portrayed current, former and prospective Cougars football players.

Cho’s work has been swimming around the internet, and WSU social media spheres, for two years now.

Or a graphic recreating Muhammad Ali’s famous fight against Sonny Liston, in which defensive end Nnamdi Oguayo is pictured instead of Ali, standing fiercely over a Pac-12 opponent.

And, for any recruits reading, the personalized edits you received in the mail or via text from Mike Leach or a member of his WSU staff were handmade by Cho.

“Everything that’s happened to me the last year has been through the power of social media,” Cho said in Pullman last month, just a few days before packing for Los Angeles.

The strategic communications major from Bothell, Washington, was taking courses in Pullman and sketching on the side when his pencil drawings of WSU football players started to gain traction, especially among the Pac-12 athletes being depicted.

In 2017, Cho had a few days to kill after completing final exams, waiting for his ride back home to finish up. So he broke out his pencil and canvas, and began drawing ex-WSU nickel Hunter Dale. Once he folded a physical photo of Dale in half and placed it over his own sketch so the two would match up, Cho’s imagination ran wild. He took a photo of the final project, sent it to Dale and saw it on the defensive back’s Instagram account the next day.

Dale’s teammates began to fill Cho’s inbox with various requests. Soon enough, he was the unpaid, unaffiliated artist for the WSU football team, spending almost every minute that wasn’t occupied by schoolwork or eating with a mechanical pencil clamped between his fingers.

“There was no thought into it,” Cho said. “It was just, ‘I want to see if I’m getting it to scale,’ kind of thing, and it just happened to work out that way.”

Every few days, a new piece of art surfaced from Cho’s Twitter account. The half-sketched, half-photo drawings became a hit among WSU players, as did the traditional free-handed lead sketches. The parents of ex-Cougars quarterback Gardner Minshew still have a “Cho original” displayed on a coffee table in the living room of their Brandon, Mississippi, home.

“The more you do it, the more you start to understand the difference in the pressure of the pencil, the eraser and the different levels of darkness and stuff like that,” said Cho, who blew through seven packets of 25-count paper and used at least 12 containers of pencil lead – 25 lead sticks per container – during a single year. “So I think just doing it every day helped.” 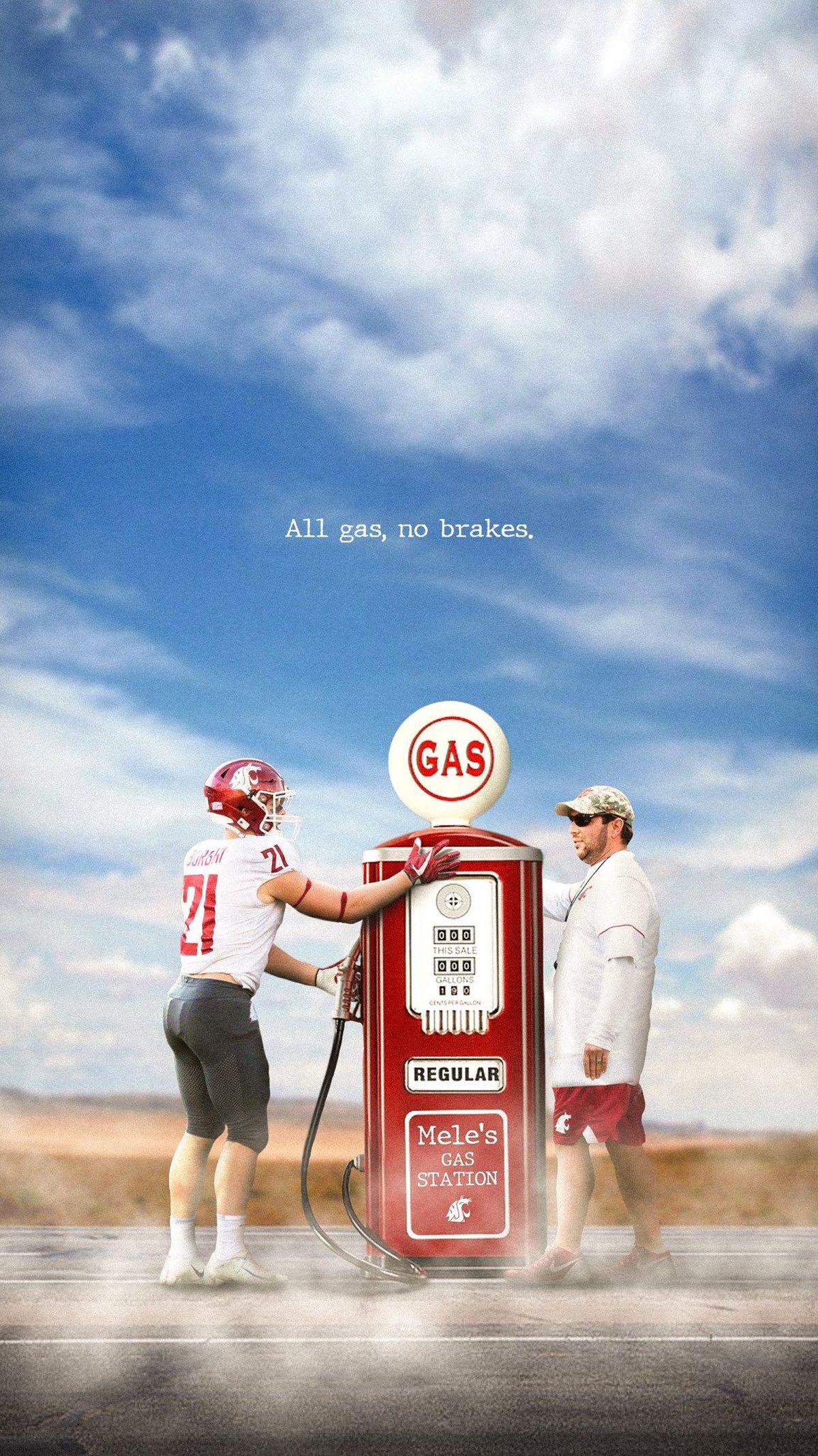 WSU’s longtime Chief of Staff, Dave Emerick, scoured Cho’s portfolio and offered him a paid student internship within the athletic department, giving Cho creative freedom as long as he produced unique graphics for every player the Cougars were recruiting.

Emerick would send Cho Excel lists of players the coaches were targeting, often giving him more than 100 names at a time. WSU’s coaches sent Cho’s graphics, and recruiting letters, to prospects either via mail, email or text.

“He would only get through four or five a week, but the kid must have never slept because it took him three, four, five, hours just to do one drawing,” Emerick said. “Then he dabbled into the graphic design. He didn’t have any classes, he didn’t have any knowledge of it, he just kind of jumped into it and he was awesome at it.”

Now, credit where credit’s due.

Cho, a former high school football player who nearly walked on at Boise State, had always been a sports fanatic, but he initially went to WSU to study architecture after receiving a hefty academic scholarship. He switched gears when he decided the field was too technical and was introduced to sports graphic design by a lumbering 6-foot-6, 285-pound defensive lineman who shared the same table as Cho in WSU’s introductory digital technology and culture course.

Dallas Hobbs, an artistically inclined nose tackle who has an Instagram page showcasing his artwork, had been producing edits for friends and various football players, and suggested it would be a good way for Cho to build his portfolio.

“Credit to Dallas, I wouldn’t really be doing this whole sports design without him,” Cho said. “He brags about that all the time.”

For all the high school athletes the Cougars were trying to entice, Cho was easily one of Emerick’s top commits. Once he ditched paper and lead – “Everyone’s going digital, more and more people see social media as that tool, so if I keep up with it, they’ll keep up with my work” – Cho pivoted to digital drawings and graphic posters, manufacturing content for WSU’s Twitter account every few days.

“He was always awake,” Emerick said, “He’d always make something.”

“You need creativity, you need kind of cutting edge, and Andrew was always innovative,” Emerick said. “I mean … I didn’t know what half the stuff meant. I’m not that in tune with the action figures and all that stuff, but the recruits loved it.”

From afar, so did the football administrators at UCLA.

Social media led Emerick to Cho first, but it’s also one reason the graphic design protégé is wearing Bruins blue, not Cougar crimson, to Saturday’s game. Florida State is the other reason.

On July 29, FSU’s social media team turned a few-thousand heads when it posted a graphic of a Seminoles player wearing the No. 15 next to a No. 4 that was laid over the original photo. The caption read, “This many days til Noles football!” leaving many with questions.

FSU eventually took the post down, but not before UCLA’s Director of Player personnel, Ethan Young, spotted Cho’s comment. Young sent Cho a direct message saying, “They may not be, but we are.”

With a full slate of undergraduate courses left, Cho weighed his two options, but reasoned, “Would the classes I took this year, just going to campus, 18 credits, both semesters, really benefit me in what I’m trying to do in terms of sports design? Whereas, I could just take the training wheels and go learn and train by the guys that work down there.”

UCLA offered him a relocation package and an opportunity to travel with the football team. That made for a sweet deal, but it also served up a bittersweet pickle for Cho in Week 4.

“I’ve been thinking about that ever since,” Cho said. “… I think that’s definitely going to be one of the cooler moments, when I step on that field and be on the other side of things, but see my friends in the stands, my boss probably and the players I got to know.

“That’ll definitely be a moment I’m looking forward to.”

One even Cho couldn’t have drawn up.