Garrin Hertel can be pretty persuasive. When the Spokane musician was chatting up vocalist-multi-instrumentalist Olivia Brownlee about philosophy and pop culture during a phone chat in 2017, Hertel asked an innocent question that changed her life.

“Don’t you wish you worked a menial, part-time job in Spokane and were in an awesome jazz band here,” Hertel said to Brownlee when she was living in Los Angeles.

“Garrin, who is like my older brother, half-jokingly asked that question, and I started thinking about it,” Brownlee said. “I was slogging through the music industry in L.A., and the trajectory was going to kill me with loneliness.

“I thought about it some more, and I thought it would be good to go back to Spokane and work part time (at Barrister Winery) so I could be near my family and make amazing music with great people and write a book about music as a second language.”

Brownlee, 37, has yet to craft her book, but the versatile musician, who can easily veer from folk to jazz to rock, returned to Spokane in 2018. The colorful character is part of Hertel’s Zonky Jazz Band, the Hot Club of Spokane and the Rockabilly Space Force. 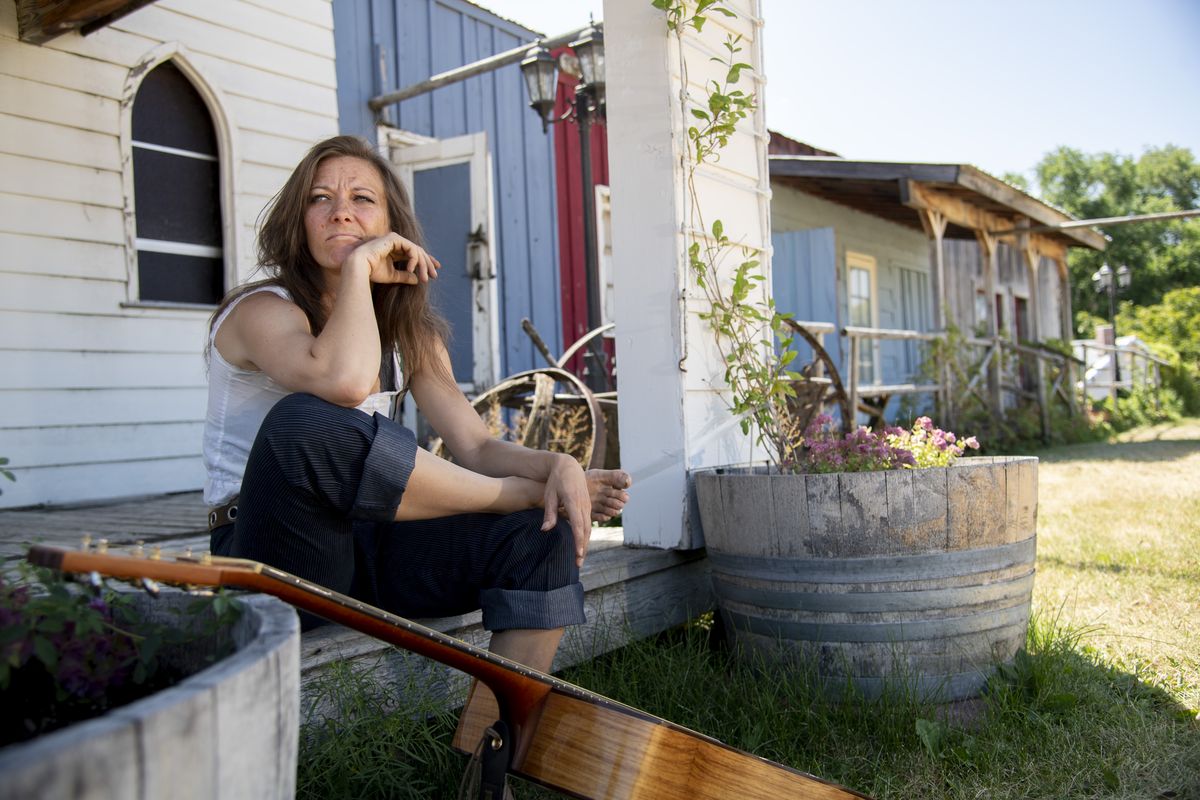 Singer-songwriter Olivia Brownlee sits for a photo at Rockin’ B Ranch, a western-themed dinner theater owned by her parents, in Liberty Lake on Tuesday. (Jesse Tinsley/The Spokesman-Review)

The daughter of musicians Scott and Pamela Brownlee, who pre-pandemic hosted Cowboy Supper shows at their Rockin’ B Ranch in Liberty Lake, is dedicated to her solo career. Brownlee has written 70 songs, which can be accessed on Patreon at patreon.com/olbrownlee.com.

The disparate collection ranges from songs recorded with three-part harmonies, others that are horn-driven and some simply solo acoustic guitar.

“I’m in a great place right now. I love how things are going in Spokane. It’s different than it was when I lived in Boston and Los Angeles. It’s obvious where the culture is in those cities. There’s the museums and restaurants. But in other cities, you have to spend more time to find culture. It takes longer, but you’ll find it – and it’ll be unique.”

That’s what Brownlee has done in Spokane, even though she spent much of her youth in town. Brownlee, who was born in Los Angeles, grew up in an unorthodox and creative home. “I experienced more live music than recorded music as a kid,” Brownlee said.

“I was 14 when I finally heard that album, and I remember the fidelity more than anything else,” Brownlee said. “It was mind-blowingly awesome. I didn’t hear a lot of recorded music as a kid, but my mother would take me to her a cappella sessions, and my dad recorded voice-overs for cartoons, and I was fortunate enough to meet these unusual characters that had such an impact on me.

“The voice-over people were so zany. I remember Frank Welker (the voice of Fred Jones in the ‘Scooby-Doo’ franchise) and he would do all of these animal impressions while standing by my parents’ aviary. The voice actors lived a different kind of life.”

The Eastern Washington University alum is doing the same, and she’s electing to create in Spokane. “I love it here,” Brownlee said. “It’s a comfortable place to live. People are so friendly. I get the impression that people look at Spokane as Seattle’s younger, uglier sister. There is an inferiority complex in Spokane, but people who never lived away from here probably don’t realize it. The folks from here are so nice.

“I think much of that has to do with the Christian community here. I grew up going to Christian youth camps in Spokane. That community has helped shape the culture, and it’s so positive. I only tell the cool people how great Spokane is. I do all that I can to not let the jerks know about Spokane. Let’s keep the jerks out of town!”

Brownlee intends to stick around to write her book and make music with her array of bands. She is most excited about the latter.

“I have worked alone and I can work alone, but I don’t want to work alone,” Brownslee said. “I really enjoy being part of a collective. I’m really looking forward to what we’re going to do with Rockabilly Space Force. There’s going to be a lot of multimedia storytelling with that group. Who knows what we’ll accomplish? But the cool thing is that whatever I do, I’ll be doing it in Spokane.”