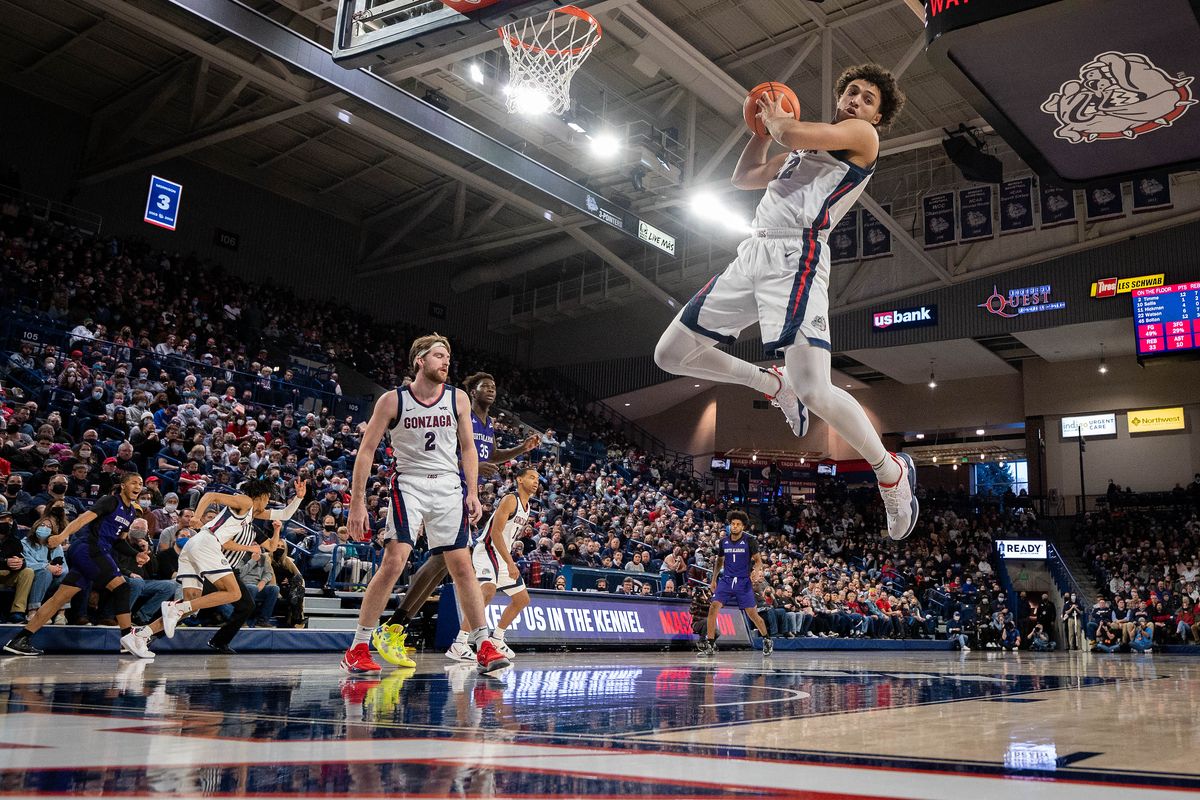 Gonzaga forward Anton Watson (22) grabs a rebound during the second half of a NCAA college basketball game, Tuesday, Dec. 28, 2021, in the McCarthey Athletic Center. Watson was game MVP with 10 points and 10 rebounds. (COLIN MULVANY/THE SPOKESMAN-REVIEW)

Gonzaga barely broke a sweat in its nonconference finale.

Julian Strawther led with 15 points, followed by Rasir Bolton (14), Nolan Hickman (13), Drew Timme (12) and Anton Watson (10). Watson was all over the court, recording a double-double with 10 rebounds and had two assists, two steals and a block.

The Zags’ first WCC game against San Diego, originally scheduled for Thursday, has been postponed and GU will instead open conference play against Loyola Marymount on Saturday at 4 p.m.

15:46 - GU 9, NAU 6: The Bulldogs get out to an early lead, but a scoring drought of over two minutes for both teams slows down the pace.

Youngblood with two 3s for North Alabama. Rest of the Lions are 1 of 8 from field.

The Bulldogs are shooting 7 of 15 from the field and are 0-for-4 on 3-pointers since Andrew Nembhard opened the scoring with a triple.

Timme and Bolton lead the Zags with four points apiece, while Youngblood leads the Lions with six.

NAU basically giving this one to GU, who has come out sluggish. Strawther’s back-to-back baskets broke an over 3-minute stretch without a field goal. He and Timme lead with six points apiece.

Strawther taking over with 12 points on 5 of 8 shooting. Meanwhile NAU is up to 11 fouls and 11 turnovers and is on a 4:21 scoring drought.

The Lions are shooting 7 of 24 from the field.

Gonzaga pulled away in the final 10 minutes of the first half, closing on a 26-9 run.

North Alabama struggled the whole period, shooting 9 of 31 (29%) from the field and committing 11 turnovers, to go with 13 team fouls.

NAU is still struggling to score, shooting 4 of 14 from the field in the second half, to go with 1-for-8 on 3-pointers.

7:56 - GU 75, NAU 43: The Bulldogs are getting some good minutes for their bench players. Watson has a double-double with 10 points and 10 rebounds, while Hickman is also into double figures with 10 points.

Expect the entity of GU’s bench to get into the final eight minutes.

Perry entered the game and scored his first points since being injured earlier in the year.

The No. 4 Bulldogs return to the Kennel today to host North Alabama at 2 p.m. on KHQ/Root.

The Zags (10-2) enter as large favorites to finish their nonconference slate with a win over the Lions (7-5).

Gonzaga last rolled to a 95-49 win over Northern Arizona on Dec. 20, and will start its conference schedule later this week with games against Loyola Marymount on Saturday, after its scheduled opener against San Diego on Thursday was postponed.

The Gonzaga men’s basketball team’s West Coast Conference opener against San Diego on Thursday has been postponed due to COVID-19 issues in the Toreros’ program. | Read more

Gonzaga has played North Alabama once before, on the same date in 2018. The Zags cruised to a 96-51 win behind Zach Norvell Jr.’s 20 points and all five starters reaching double figures. 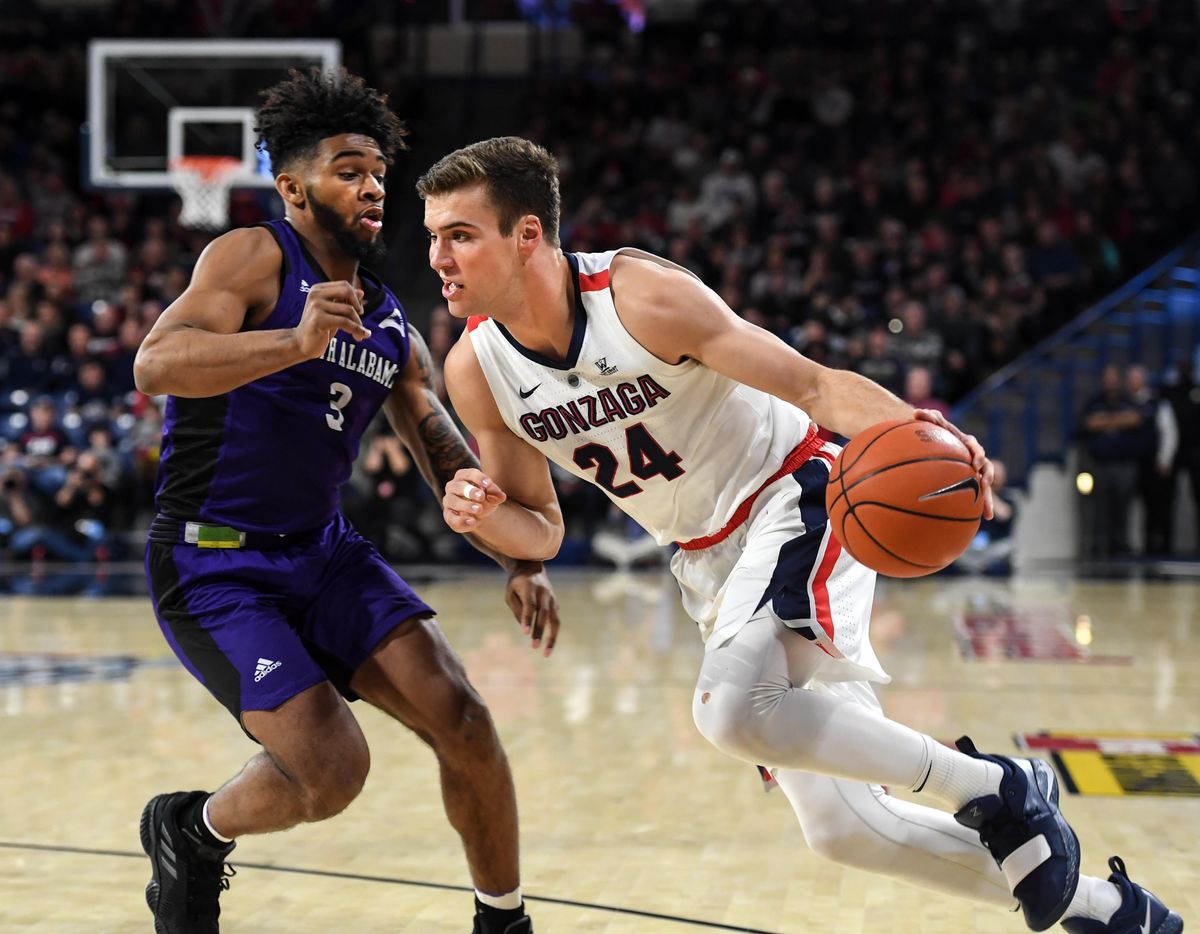 Gonzaga gets busy in a hurry after a short holiday break, beginning with North Alabama’s visit Tuesday. After facing North Alabama on Tuesday, the Zags are on the road to open the WCC campaign against San Diego on Thursday and Loyola Marymount on Saturday. | Read more

The pick here is guard Jamari Blackmon, based on experience and productivity. The 6-foot-1, 205-pounder is closing in on 100 career games and starts for the Lions. He averaged in double figures in each of the previous three seasons and he checks in at 9.6 this year. | Read more

‘I believed in it the whole time’: Gonzaga forward Killian Tillie has persevered to earn rotation role with NBA’s Grizzlies

The Give Back spirit a big part of Gonzaga guard Nolan Hickman’s life, building up Seattle youth through basketball

The idea came to Gonzaga freshman guard Nolan Hickman a few years ago, shortly after the conclusion of his annual basketball camp for kids in his hometown of Seattle. “Maybe we should turn this into a foundation,” Hickman thought. “I gathered all my family and we got it going. We made a Website first and it blew up from there.” That’s how Hickman, now 18, with a lot of help from family and relatives, came to be founder of The Give Back Foundation. | Read more

Gonzaga remains at No. 4 in Associated Press Top 25 poll

Gonzaga will have to wait until the new year to make any more headway in the Associated Press Top 25 poll. | Read more