If perception is reality, downtown Spokane is both a booming business district but riddled with crime, on the pandemic rebound but rife with homelessness and better than it’s ever been but the worst it’s been in years.

It’s been that way for years – downtown Spokane was a frequent topic of debate in the 2019 mayoral election – but the discussion has been rekindled thanks in large part to the city’s homelessness response, resistance to police reform and the opening of a new police precinct downtown.

Earlier this month, Mayor Nadine Woodward testified in support of a bill in the state legislature that would scale back some police reforms enacted statewide last year.

The next week, Spokane Police leaders updated the Spokane City Council on the downtown precinct, the opening of which was a central campaign promise Woodward fulfilled early in her first term.

The department touted that its analysis showed the downtown crime rates in 2021 remained below the previous three-year average from 2018 to 2020. 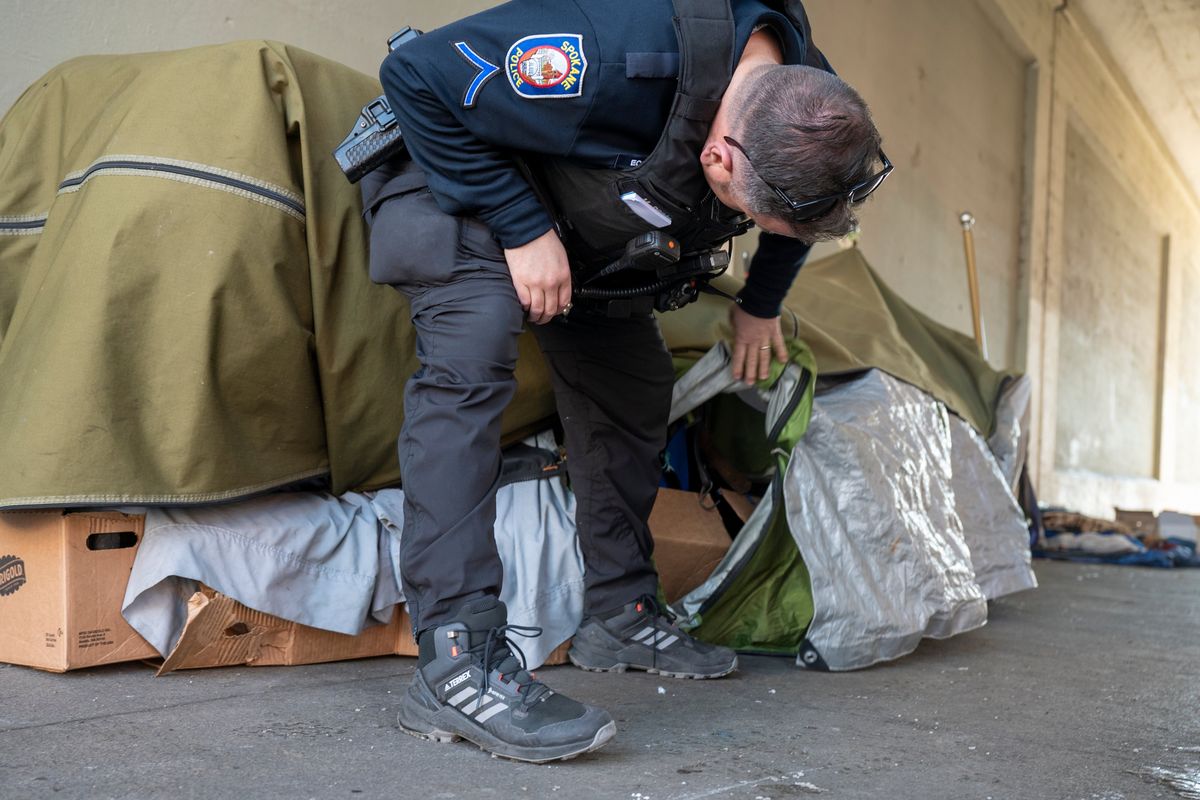 Spokane police Officer Micah Prim tries to ascertain if the resident of a tent-like structure is home on Friday in a tunnel under the train viaduct in downtown Spokane. The owner of the tent wasn’t present, and Prim made a note to come back and check on the owner. (Jesse Tinsley/The Spokesman-Review)

Woodward believes the two analyses – the one she presented to the legislature and that provided by the police department – are not contradictory. Her downtown precinct is working, she said, but crime has spiked due to legislative reform.

Woodward has been working downtown since taking office in January 2020 and through the entire pandemic. The increasingly visible issue, she argued, is people with an apparent mental or behavioral health issue. She cited someone who wanders into the middle of an intersection as an example.

Despite acknowledging the area’s persistent problems, Woodward argued the new downtown police precinct is working as she envisioned it while running for office in 2019.

Businesses are “very happy to have (the precinct) back into the core of downtown,” Woodward said. “If there is an issue downtown, they are able to get there within minutes, and that was the whole purpose of relocating down there.”

But the increased police presence, particularly on foot and bike, hasn’t been enough to stave off an increase in crime compared to 2020. As she testified before the state legislature, Woodward noted that crime spiked in the latter half of 2021.

Woodward’s claim is true, but even amid last fall’s spike, downtown crime remained below the highs seen in previous years, argued City Council President Breean Beggs. He attributes the spike in crime last fall in part to an “announced, organized slowdown” of law enforcement in reaction to the reforms passed by the legislature.

In a news conference this week, Spokane Police Chief Craig Meidl described the limitations last year’s reform placed on when an officer can detain someone. The old law allowed police to hold a person based on reasonable suspicion, but the new law raised the bar to probable cause, a level that requires more evidence that a person committed a crime.

“That is really the bread and butter of proactive law enforcement, but also a tool that officers need to keep the community safe,” Meidl said.

As an attorney who has long worked downtown, Beggs said it “is very safe, in my opinion.”

But Beggs is in the minority, at least according to a recently released survey conducted by The Downtown Spokane Partnership. The results indicated that downtown crime is more rampant than we may know by looking at official crime statistics as many businesses don’t bother reporting it to police.

“We are quite concerned about the direction that downtown is headed in, and that is exactly what our survey notes,” said Andrew Rolwes, interim president of the Downtown Spokane Partnership.

Nearly two-thirds of respondents said the safety and security of their downtown property is somewhat or much worse compared to five years ago.

The perception is at odds with the longer downward trends in crime numbers tracked by police.

The partnership, which operates the city’s Business Improvement District, found that the ratepayers surveyed had faith in the long-term future of downtown but needed short-term issues addressed.

The owners of nearly every large building downtown have hired private security firms to protect their property, Rolwes said. The number of locked doors that require a fob or key code to enter has proliferated, and business owners have invested significant money in measures like new outdoor lighting.

But in addition to the survey’s results drawing debate, its methodology has drawn scrutiny.

Councilwoman Lori Kinnear described it as a push poll, leading its respondents to the conclusion that downtown crime must be a major issue.

“When you suggest to people that there is a safety problem, then you’re going to get that answer,” Kinnear said.

When Kinnear moved to Spokane in 2000, there were parts of downtown where she wouldn’t go, she said.

“Is it worse? I don’t know. No one has given me any kind of data saying it’s worse,” Kinnear said.

Beggs lamented that “you hear all the negatives and you don’t hear the positives,” such as Spokane’s rebound from the pandemic.

“You could tell a completely different story,” Beggs said.

While city lawmakers, downtown business representatives and the mayor may have different takes on the current safety of downtown, they appear to agree on the need for more robust funding of social services, such as addiction and mental health treatment.

“Certainly we want to see individuals in those circumstances’ psychological and physiological needs be met, but it’s going to take a great deal of time and it’s going to take the entire community pushing on every conceivable avenue to improve those conditions over a long period of time,” Rowles said. “That includes addressing the up-close and immediate problems that property managers and workers are experiencing each and every day.”